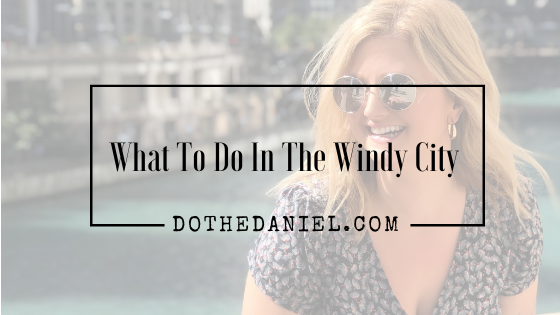 A Weekend in Chicago

Let me tell you, 2019 was quite the doozy. But I’d like to think that I made the most out of it for sure. Recently, I reconnected with my love of travel and music – and coincidentally, the convergence of the two together. I think that’s why festivals are always such a great time. When I initially heard about Riot Fest, I just knew that I had to go. And it was an added bonus that it was being held in Chicago, a city that was always on my bucket list, so it was a no-brainer. We packed our bags and off we went to the windy city!

Now if you’ve never been to Chicago, I would highly recommend making the trek. It’s a short flight or fun road trip south west of the Toronto-area. We opted to drive, taking our time and making an adventure of it along the way. Now since we had such a great time over the few days we were there, I thought I would put together a bit of a guide for your own weekend getaway to Chicago. Obviously there are tons of things to do, but here were some of the highlights!

It was an absolute no-brainer for us to use booking.com for this one. Whether it be for a great deal on a hotel stay, or a unique residential property – they’ve got you covered. And honestly the prices are just too good. We opted to stay at The West Loop Lofts which was located in the West Loop district, not too far from everything we wanted to explore in the city. We liked being able to stay somewhere a little quiet and outside of the core of Chicago, while still being located in a place from which it was still easy to get around.

The check-in was simple, all done online beforehand. They gave us instructions on how to enter the building and what was included as far as amenities. When we got to loft, we fell in love immediately. It was beautifully decorated, with enough room to sleep at least 6 people. Each bathroom had shampoo, conditioner and body wash – which was really nice considering it’s not a conventional hotel setting. The kitchen was well-stocked with coffee and tea, as well as everything you could ever need for a couple of days away, if you wanted to cook instead of go out to eat. There was easy access to wifi, Netflix and even Alexa should we choose to use it. It was honestly the perfect way to make the most out of our time there, while being able to still feel at home.

Food is a big part of travelling for me. So, what first comes to mind when you think about authentic Chicago food? Mine was deep-dish pizza, hands-down. I had heard of many places to grab a homemade pie, but Giordano’s was our top choice. Starting with a salad, we went all out and ordered one of the best meals I’ve had while on vacation. The pizza was saucy, cheesy and full of flavor. We even took the rest back to our hotel to eat as leftovers later!

While walking around, we stumbled across Stan’s Donuts & Coffee and decided to pop in to grab some coffee. Instead, we left with a few incredible fresh donuts and a big smile. The rest of the time, we mostly ate at the festival. But a trusted friend of mine provided a well-researched list ahead of time that I wanted to share with you! She suggested going to brunch and bottomless mimosas at D.S. Tequila or to the local staple called Ann Sather’s for breakfast and cinnamon buns (they’re known for these apparently). On her list for nightlife is to have a cocktail at The Signature Room as it’s on the 95th floor and has an epic view, or to go to Kingston Mines blues bar for some live music. I’ll have to try those next time!

What To Check Out

As a self-proclaimed former emo kid, Riot Fest was the perfect way to enjoy all of the bands that I loved from my youth. Not only were there some major throwback moments, but we also got to enjoy some great live music, while being able to check out some of the sights in the area. Some of our highlights were walking around drinking Goose Island beer while checking out all of festival fashion, eating the variety of foods in the food truck section (the empanadas were EPIC), and dancing and singing along to the music obviously!

Our favourite bands of the weekend were Senses Fail, Manchester Orchestra, The Starting Line, Taking Back Sunday, Less Than Jake and Bloc Party. A handful of the bands actually played some of their earlier albums back to front, so it was pretty magical to be transported back. For the record, I’d go back to Riot Fest in a heartbeat.

One of the days we had off from the festival, we spent walking around downtown. The shopping is wonderful all along The Magnificent Mile. Checking out the spots over and around the water is great way to get some amazing views of the city. My favourite place was down by Navy Pier. Completed in 1916, it’s one of Chicago’s top attractions. Stretching 3,300 feet along the shoreline of Lake Michigan, it’s a year-round destination that houses firework displays, theatre, daily cruises, live music, shopping, food and so much more. You can even head over to Pier Park and the Centennial Wheel to take in some views of the city. It’s definitely worth checking out.

More on the list from my friend, was to go to the Bean, on a river cruise and to the comedy show called Improvised Shakespeare. She also mentioned that there’s a walking tour called “Gangsters & Blues” which covers off talking about infamous criminals like Al Capone.

If you’re looking for a fun weekend away, I’d highly suggest booking a trip to Chicago. Whether it be for a music festival like we did, for the food, for the nightlife or for the attractions, or all of the above – there’s something for everyone. I can’t wait to go back!

* * Promotional consideration has been given by booking.com – our disclosure can be found at all times by clicking here.