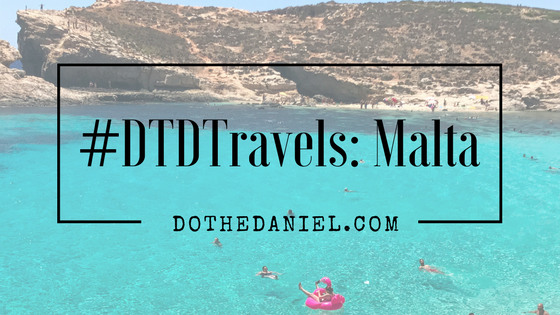 by Nicola Whyte • August 8, 2017 • Travel & Lifestyle • Comments Off on Exploring a Wee Island in the Mediterranean •

Exploring a Wee Island in the Mediterranean

The only time that I willingly get up at 3am, is when something airport related is happening. Be it picking up someone off a flight, or heading out to catch a flight of my own. On a random Tuesday in July, that is exactly what I did, catching a flight to the sunny paradise of Malta, leaving behind London, who after a heatwave has turned a bit grey.

I flew British Airways – having scored an awesome deal with Avios! Did you know that you can collect Avios on just about all of our online shopping if you do it through their website – it all adds up! The flight was great, breakfast courtesy of Marks and Spencer’s in air service and a few cheeky gins to get in the holiday mood. Oh and I am 99% sure that I might have snored rather loudly when I had a wee nap. I was that person.

Arriving in Malta, I stopped off at the transport desk and picked up an Explore Plus bus card. Depending on how long you are on the island for, this 12 trip card can save you some cash. It works out to be less per trip than paying directly on the bus. Unless you are hiring a car, bus is the only way to get around the island. The bus from the airport seems to go over most of the island, so you can easily get to your accommodation within about an hour. I was the first of four of us to arrive, so I boarded the bus and headed to St Julian, a beautiful bay that is surrounded by a small square and lovely restaurants. After checking into Inhawi Boutique Hostel, which was pleasantly bustling and bathed in sunshine, I headed out to explore. Malta Guides are useful to learn more about the island, especially if you want to know about the real estate here (maybe one day!) The hotel was lovely but if I’m being honest, I would have preferred a villa instead. I was looking on Rental Cloud and I found some gorgeous holiday villas that we could’ve stayed in. There’s always next time I guess! 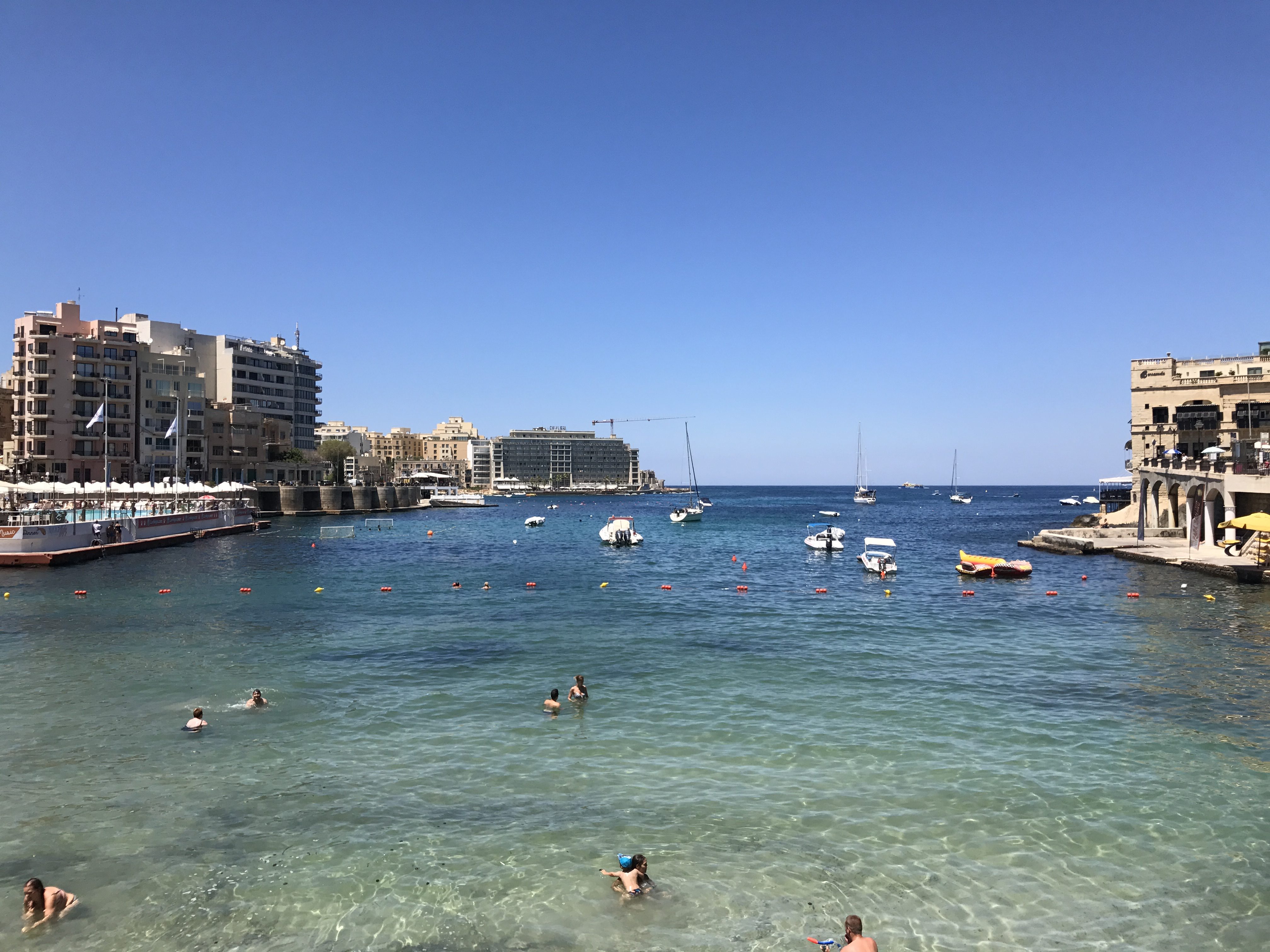 The day was hot, so I slathered on my 75+ sunscreen (New Zealand-strength) and grabbed some delish pastries from Bullata Square, right on the bay, I was about to discover that the people of Malta are really friendly, and so happy to direct you or feed you! I decided to grab a bus to Valletta. Valletta is the capital of Malta and is a stunning 16th century walled city. You can grab a bus to the entrance, which was under extensive construction when I was there, but even this did little take away from its beauty.

You can have a look at a plaque that tells you the history of Valletta, its occupation by the French, the bombings during WWII and of course that before she became Queen, Elizabeth and Philip lived in a villa there, whilst he was stationed in the Navy. This makes Malta the only place in the world outside of Britain that a British monarch has called home.

It is in the midst of all of this history, that I take a wander down the wide streets. I am starving by this point, so stop off for some lunch. I had been advised to try the rabbit – it’s a speciality of Malta. I ate rabbit every day that I was there and can attest that it’s delish – in pasta, in a stew, in any form. After a very reasonably priced lunch and an even more reasonably priced Aperol spritz, I continued my wandering. The walled city is a beautiful space to spend a casual afternoon. I stopped off to look in beautifully ornate churches, too see many of the designer stores and at one point, sit and listen to a rehearsal of an open air concert whilst eating some gelato. You can see how this seems like a perfect afternoon to chill. I headed back to the hostel for a nap before the others arrive.

You could be forgiven for thinking that I never travel without Liam – and this time was no different, he is the first to arrive, and after checking him in, we headed down to the square to have an Aperol in the balmy summer evening, whilst keeping an eye on the bus stop for our friends Sarah and Anna, who live in Prague, to arrive. We have big hugs as they get off the bus and head for a much needed dinner and catch up.

Unsurprisingly, the next day dawns sunny and hot, and we decide to head to the Blue Lagoon. Liam and I have bought with us an inflatable flamingo and unicorn. We boarded the bus and after about an hour are at the port, where we jump on a boat to head out to Comino – the island that is home to the stunning bay that is the Blue Lagoon.

This place has water so clear that the inflatables cast a shadow through it. Malta does not seem to have beaches as we know them, there are gorgeous bays, where you sit on the rocks and pick your way down into the waters. Unlike our other European beach holidays, there are no loungers or shades. This does not stop the Blue Lagoon from being one of the most popular spots on the island. The boats run out there all day, with the last departure back to the mainland being just before 6pm. 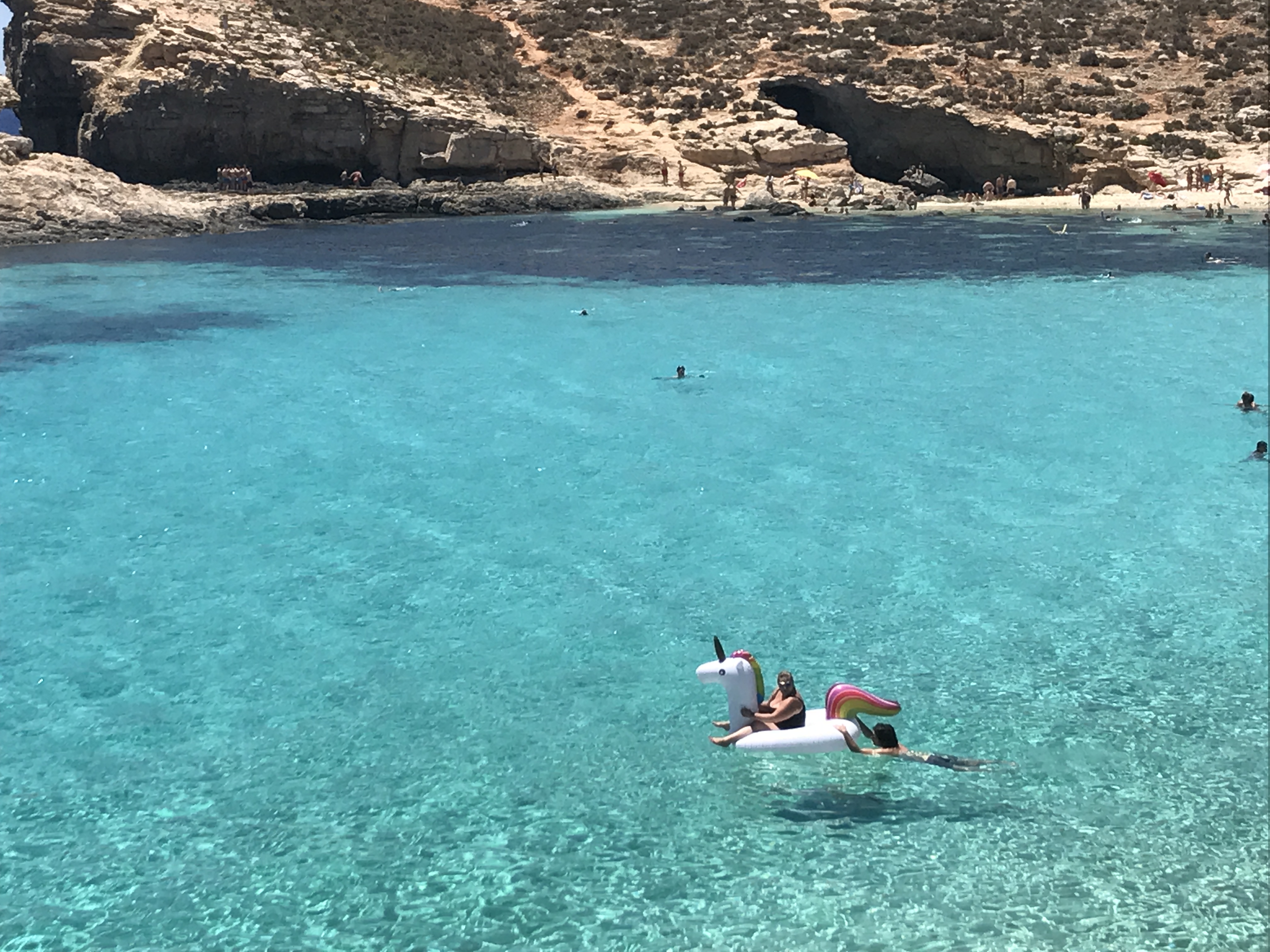 You can buy food and drink out there, as well as umbrellas and even more inflatables. It’s important to sunblock – as we found out, without shade, you will burn. We spent our day swimming and messing around, whilst drinking cheap beer and vodka. It’s the perfect way to relax and get some much needed vitamin D. We were sad to leave this untouched beauty, but it was time to head back. We finished off our day with dinner in Bullata Square (it has become our local!) and whilst a few of us succumb to sunstroke, Liam and I headed off in search of a few more drinks and get to know the local area a bit better. We find gelato and a few more Aperols to finish off the evening.

As we have been over-exposed to the sun, the next day after breakfast at the hostel, we headed a bit further around the island for the others to check into their new hotel. I was leaving on this day, as I have to be back for work and I am predictably unhappy about this. My last day of holiday blues are well-known. We sat on a beachside bar and sip yet another Aperol – I am beginning to think that we might single handedly be keeping them in business at this point – and decided what to do with the day. I’m keen to see something cultural, however, we have been advised that should we wish to visit the underground tunnels at Paola, that we needed to book and also that we would need proper shoes. We hadn’t booked and none of us had sneakers, so that was sadly ruled out. If I am ever lucky enough to come back here, I will be leaving the inflatables at home in favour of sneakers! 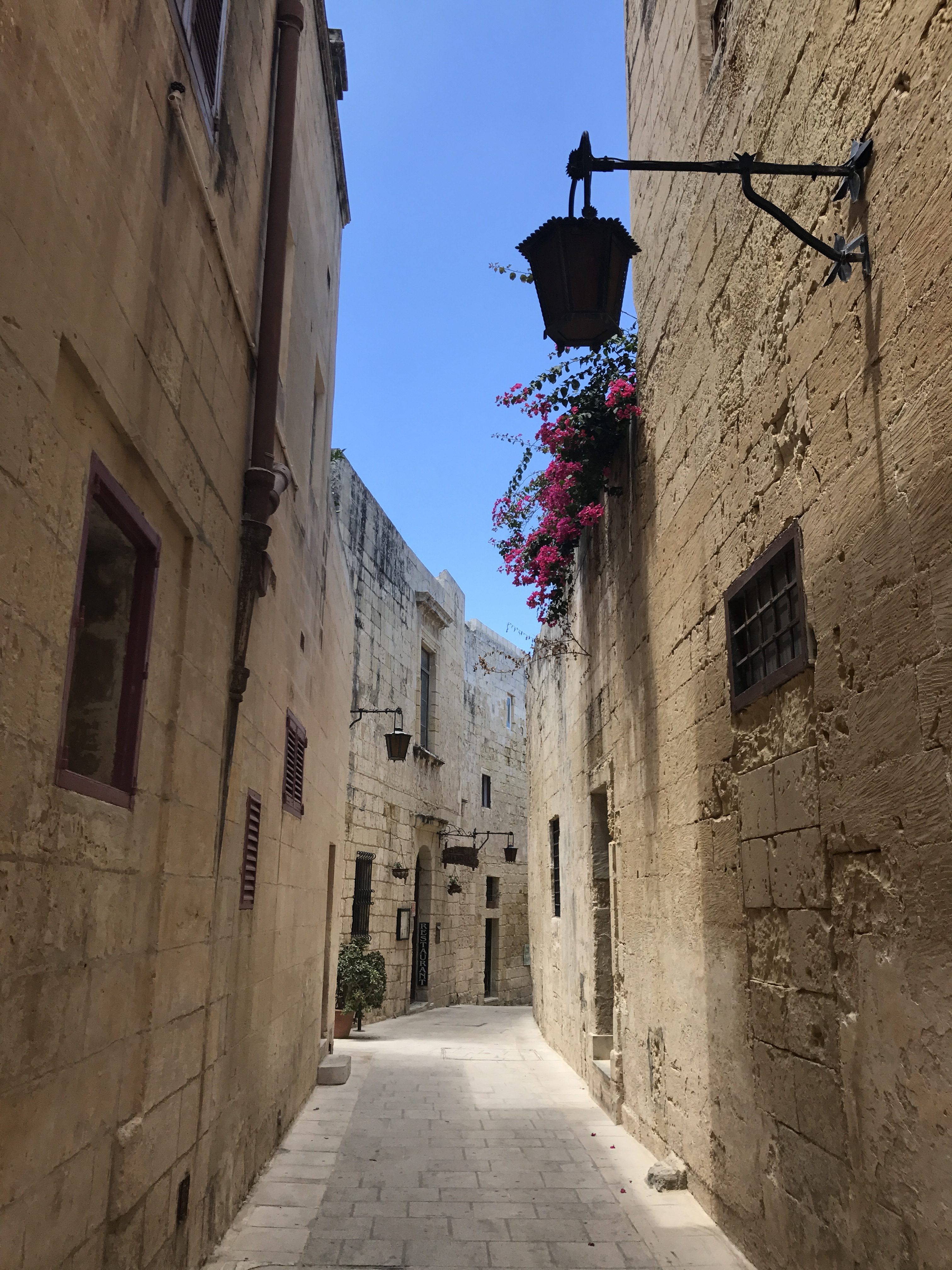 We decided to grab a taxi and head to Mdina. This is an ancient walled city known as the silent city. At over 4,000 years old, it is said that St. Paul lived here after being shipwrecked. The ride there took us past different parts of the city, and I remarked on the huge number of cacti that are evident here. They seem to form fences in some places and are huge.

It is then that Liam tells me that, as a child, he had over 60 cacti and was on a television show called “What Now” in NZ. “What Now” was on a Saturday morning and every child of our age watched it. It had features in between the cartoons. I once won movie tickets off it, but Liam was actually on it, showing off his cacti collection. I was stunned that it had taken over four years of friendship for this to come up and also want to know where these cacti are now. 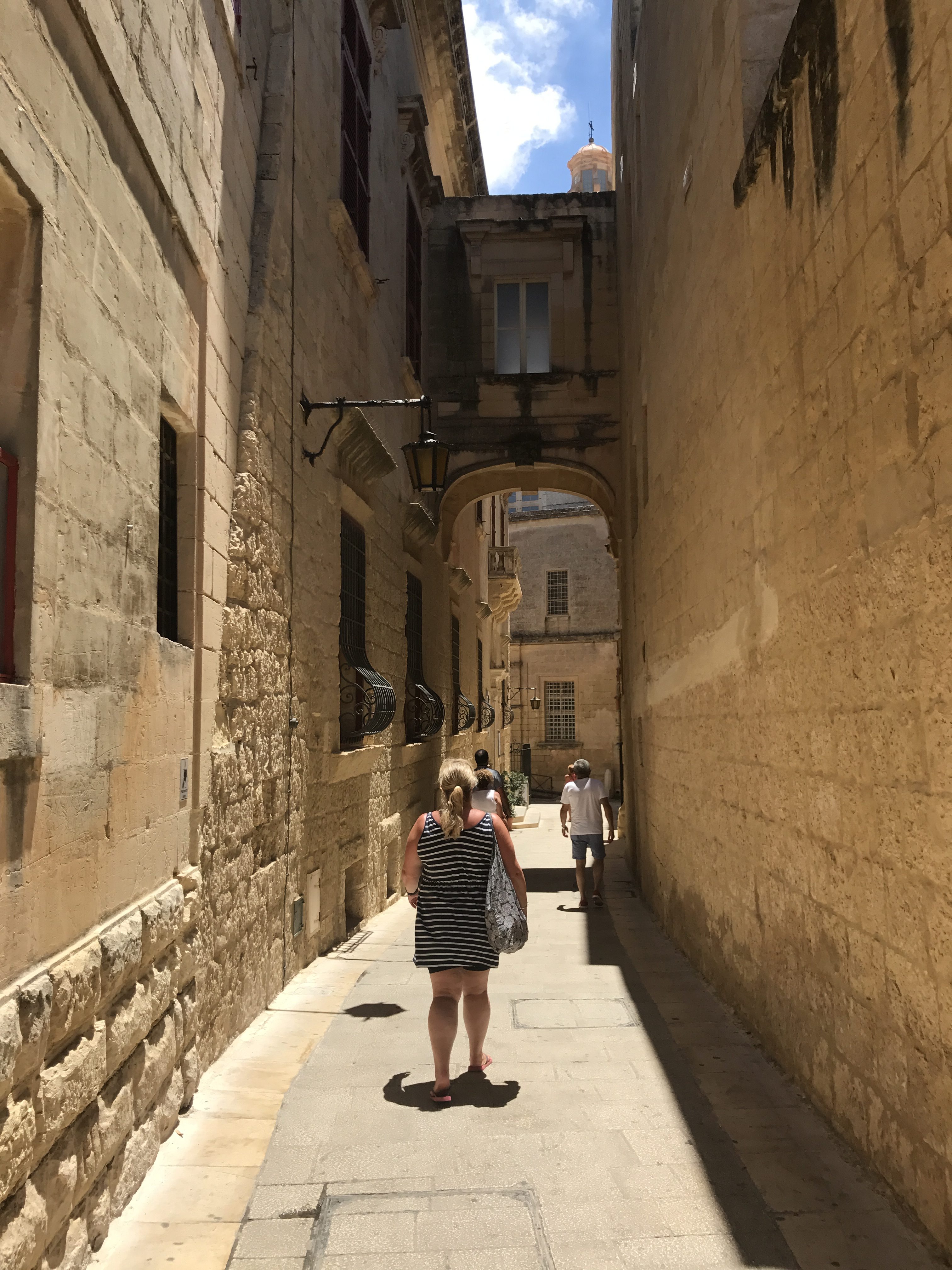 We arrived in Mdina and spent a morning wandering looking in the gorgeous stores – there are beautiful stores full of Maltese glass, silver jewellery and arts and crafts. The city is lamplit at night and is a peaceful haven during the day. You can see the religious aspects as there are pictures of saints or of the Virgin Mary over the street names.

I loved this place, it’s so peaceful and calm, it’s like stepping back in time, the streets are pedestrianized and filled with ornate ironwork. I didn’t want to leave, but I needed to swim one more time before getting on a plane back home. 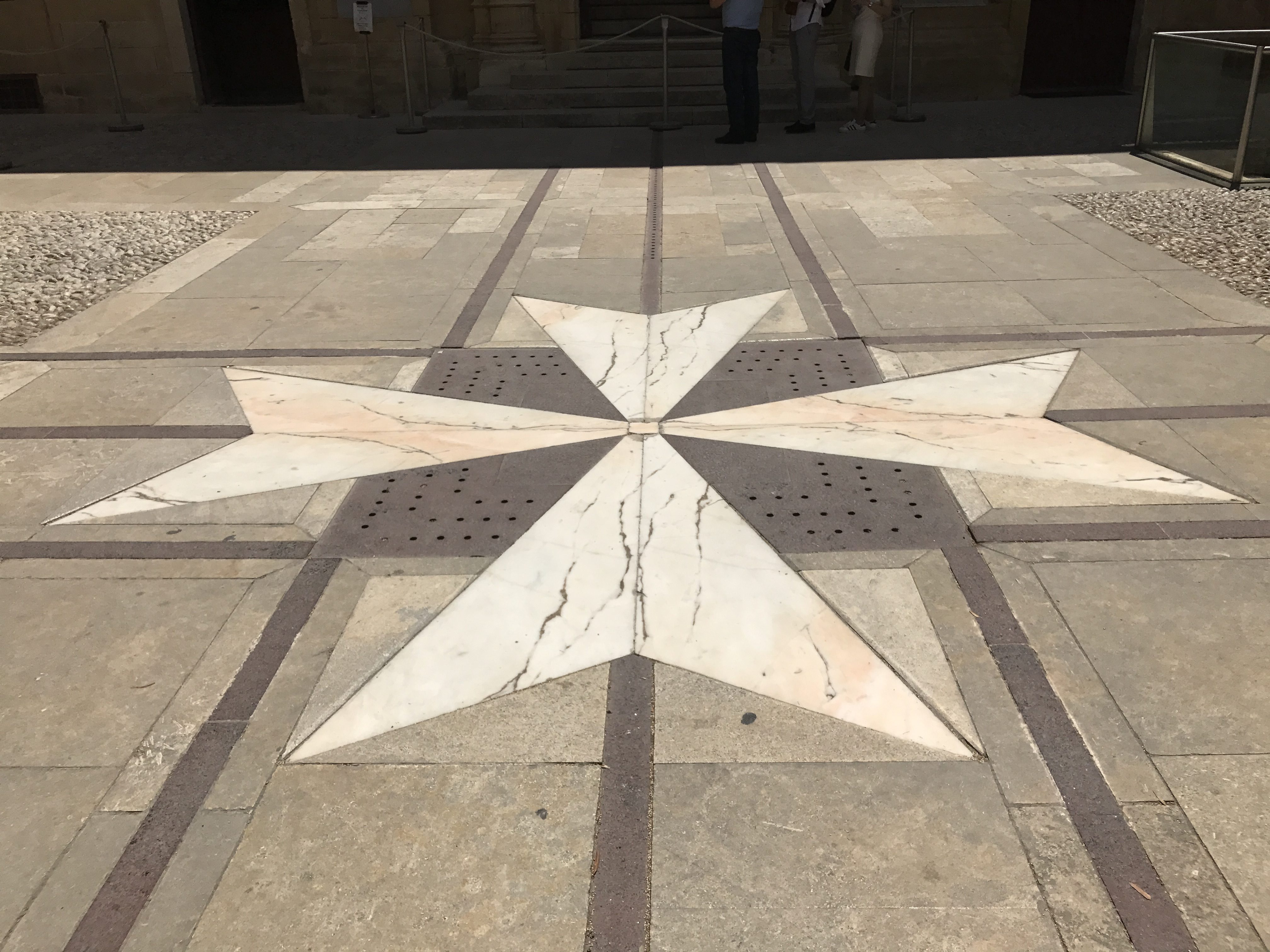 We headed back to St Julian’s and to one of the beach side bars there. I spent a few hours swimming and sunbathing and marvelling at the sea and how clear it is here. And then with large dose of regret, I got on the bus to the airport. As I had a local drink called Kinnie at the Hard Rock Cafe in the airport, I thought about what a lovely few days it’s been – sunshine, clear sea water, inflatables, a small dose of culture and the best friends I can ask for.

Malta, you were brilliant, I am sure that we will be back at some point! 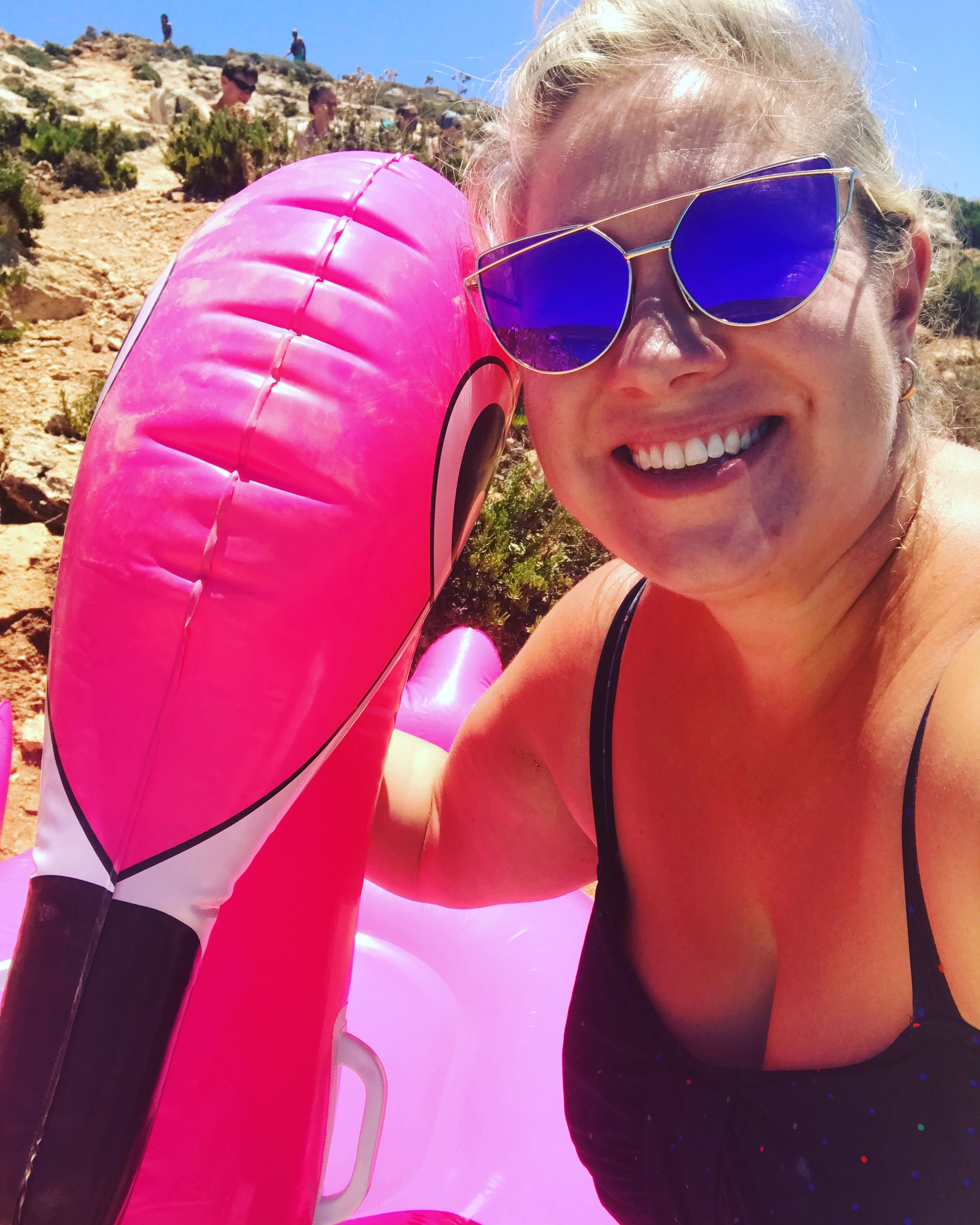 Previous post:
Get ready Toronto. Next Post:
Who wants to WIN a Huawei P10 Plus with Leica Dual Camera?