by Daniel Reyes Cocka • December 9, 2016 • Events, Travel & Lifestyle • Comments Off on A sit down with Dr Jessica Langer to talk about her viral positivism •

Looking back on 2016, I think the common thread that I hear from friends and family around the world is that the year was a tough one. I can agree with that in some ways, but the way I see the world is also a little different. I could sit down and itemize the things that went wrong, or the hard times I faced, but what purpose would that serve? I like to believe that the lessons I had to learn the hard way have helped me to be a better man and business man. I was planning on writing an end of year post where I look back and thank those people, moments and events that challenged me and have in many ways humbled me. I recently watched an episode of Anthony Bourdain’s “Parts Unknown” where he visited Japan. One of his guests spoke about a local vegetable that only grows in the winter, under a fine layer snow. He said something along the lines that in life, it takes a certain amount of bitterness to appreciate the beautiful. That really stuck with me. But this post isn’t just about me and the lessons I have learnt. It is about Dr. Jessica Langer, and how with one small gesture of kindness, she helped to touch people around the world who needed some goodness in their lives. The beauty to balance the bitterness one might say.

Jessica and I became friends earlier this year via the always inspiring Casie Stewart. I was even lucky enough to visit her class at Ryerson to speak to her class of marketing student about my experiences as blogger and how I built my business. One of my favourite speaking engagements of the year, it left me feeling inspired about the power of social media and the online sphere through the eyes of the next generation. Shortly thereafter, Dr Jessica Langer wrote a heartfelt email to her students at the end of the term to say farewell before the next step in her career. No one could have predicted what happened next, and when the email went viral online and the media storm started, I wanted to take a few minutes to share her perspective on it all. 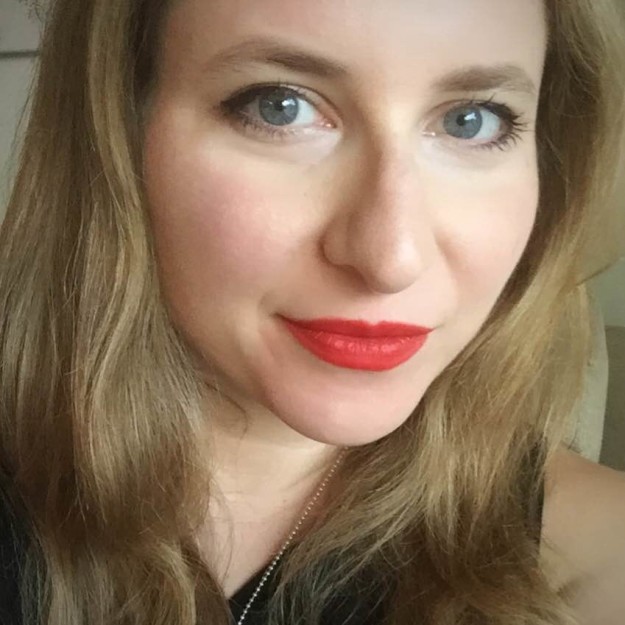 If you haven’t seen what I mean, you can click here to see the original tweet which has now circulated the world. This one particular student was so moved by a heartfelt email that she chose to share it with her followers online. It’s funny how the world of social media works. Some things go viral with no rhyme or reason, but this one particular circumstance was something that clearly we all needed to see and feel. Here is the famous excerpt: 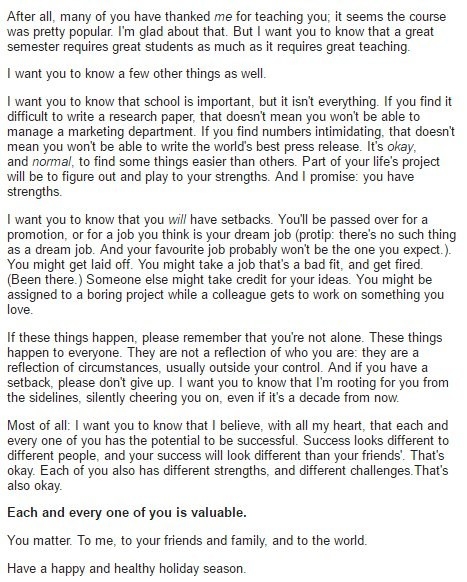 When I asked Jessica about the experience, she had this to say. “It’s the sort of thing that you read about but never expect to happen to you. (In regards to the email) I kind of felt like this was a way to make their path a little easier than mine had been. What I wanted to do is give them the perspective of someone who has been there and to let them know that their career is not going to be a straight line, it’s going to have bumps.”

As a professor, I was curious to know how she would teach about this moment in social media and the world of online communications.

“She (her student) was the one who shared it. If I had shared it, it wouldn’t have had the same impact. It’s not just the letter, but the student’s reaction to it itself. Removing me from the message, it centers around the impact of the message – I don’t want it to be about me. It’s about the students. It’s about people who aren’t my students who are reading this. Everyone has something to bring to the world – and I see myself as just the conduit. I want that message and I want that to get out.” A humbling perspective and one that stuck with me when we spoke at length of the phenomena that took place right before the holidays.

Since the viral response to her email and subsequent student tweet, the online world has taken notice. From BuzzFeed to A Plus, She Does The City to many more outlets, it seems as though the world picked up a beautiful moment and wanted to share it with us all.

But the question remained, why did it go so viral? When I asked Jessica about this, she said “It’s so simple, but so necessary. I think that everyone did need this. The world isn’t all bad and it can’t always be bad news that is being shared. It touches us all on a deeper level.” To which I completely understand and offered my sincerest thanks. Amid a difficult year for me personally, it was a nice change of pace. Something I like to think we all can get wrapped up in the world and the negative. But when something beautiful is shared, something so pure and honest such as this, it should be celebrated and shared around the world.

“In the wake of this all, former students have reached out to remind me that I personally changed their career path. Everyone remembers that one teacher who touched them and spoke to their lives on a deeper level.” And it’s true. I still remember the lessons of Rosemarie Hoey during my time at Carleton University. She inspired a passion in me that I carry to this day and I cherish the lessons she taught me during my education.

I think the world needs a little more goodness. Yes, i’s been a rough year, but why not focus on how far we have come instead of how far we have yet to go. Sometimes the biggest change you can make in your life is simply in your perspective of it.

Make sure to follow the outspoken and inspiring muse behind this powerful message by following @DrJessicaLanger on Twitter. She’s a hoot and one of my favourite people in this big, crazy and beautiful world. Thank you Jessica for helping to remind me that there are beautiful moments like this one out there.

For more behind the scenes of this and other amazing brands we are working with around the world, make sure to follow along with the #DoTheDaniel Instagram account. We would love to have you join on our adventures! AND yes. we’re on Snapchat too! – click here to follow us!