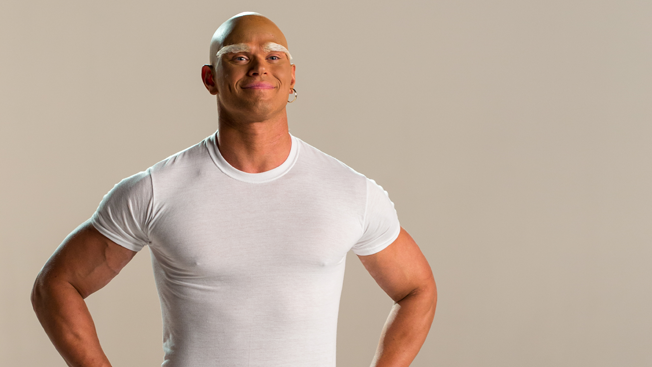 by Daniel Reyes Cocka • September 24, 2016 • Contest • Comments Off on A Q&A with Kellan Lutz about #TheNextMrClean •

A Q&A with Kellan Lutz about #TheNextMrClean

By now you’ve most likely seen my recent photo where I shared my excitement for Mr. Clean’s #TheNextMrClean contest. I did my best to recreate the iconic Mr. Clean look following the talented Kellan Lutz. So when I was asked if I’d like to interview Kellan about the campaign and get to chat with him about the contest here in Canada, I had to jump at the chance!

So what is #TheNextMrClean Contest all about?

“Mr. Clean is known not only for his cleaning, but his staying power as a character, too. For the first time in almost 60 years, the brand is giving Mr. Clean a well-deserved rest. Mr. Clean has launched an open casting call to find the best replacement–someone who can fill Mr. Clean’s very clean shoes and be #TheNextMr.Clean.

In August, a private audition was held with Kellan Lutz in Los Angeles, California for the role. Although he had a stellar performance, after a closer look Mr. Clean found too much dirt on him and decided to open the audition process up to the public instead. The casting call and contest is open to North American residents (excluding Quebec). Canadians can participate in the contest by following this link to enter. The next Mr. Clean will win $20,000, a year’s supply of Magic Erasers and an all-expenses paid trip to New York City, where he or she will be featured in a 2017 limited edition Mr. Clean calendar.”
If you have yet to see Kellan’s video, click play below.

So now that  we’re all up to speed, let me jump right into the Q&A I just had with Kellan. (We’re on a first name basis now)

Q: The Next Mr. Clean seems to be taking the world of social media by storm, and Canadians are getting excited to see you and join in on the fun. If you could pick anyone that you would like to see audition, who would it be?
Kellan: You know what, Johnny Depp would be it for me. I like to think he would take a lot of time to put on his jewelry, and he would probably sleep with that jewelry on and get a little dirty too. To see him in a Mr. Clean look with a bald cap on, with one earring, wearing all white would be really funny. If I had to pick someone in my immediate life, I would love to see my brother David. He would totally go full on Mr. Clean!
Q: Let’s get real and talk about your cleaning habits. At home, are you a clean freak or are you a mess?
Kellan: I am very very clean. I guess I really like being tidy. In my opinion, a dirty space means the mind is dirty. I think the cleaner your space is means that everything is more in line. It’s like whenever I pack to go out of town, I start by doing all my laundry, then I pack and it’s like I start fresh. I go through everything to make sure I am taking everything I need. And then when you come home, it’s like coming home to a hotel!
Q: I know that when I was younger, I wasn’t the biggest fan of chores. What was the one chore that you didn’t like when you were growing up?
Kellan: You know what? I would have to say mowing the lawn because when I first started, we were living on a farm in Iowa. We still have that farm and I remember that my mother was so creative – she was very smart to get me to do it. I could sit on a machine and pull levers to turn right or left, but with it being a farm it would take a couple of days. When we moved to Arizona, I would get $5 a week as allowance for mowing the lawn. But it’s 120 degrees there and it wasn’t worth the five dollars!
Q: Of all the sets that you’ve been on in your amazing career, which do you think would benefit most from a good clean with a Mr. Clean Magic Eraser?
Kellan: The last movie I did, called The Nest with Kelsey Grammer, where my character always had so much dirt and blood on him. It’s like Indiana Jones, underground and always so messy. But I also go very very messy in Hercules and The Expendables. So I’d have to say those three for sure.
(Here’s a bit of eye candy for you all)
Q: If you had one tip for Canadians when they are submitting their Next Mr. Clean auditions, what would it be?
At the end of the day, I think you just need to be yourself. If you can do it in a bald cap, with a gold earring on the left ear, wearing white, even better. Have fun with it and remember that Mr. Clean is light and fun while also tough and strong.

Just like me, he’s strong, helpful & looks really good in white. Go to TheNextMrClean.com for your chance to become #TheNextMrClean #spon

Sometimes I can be Mr. Dirty, and sometimes I can be the #TheNextMrClean ? DYK that Canadians can participate in this amazing #Contest by heading to http://bit.ly/2cIytDh – The next Mr. Clean will win $20,000, a year’s supply of Magic Erasers and an all-expenses paid trip to New York City, where he or she will be featured in a 2017 limited edition Mr. Clean calendar! #Sponsored

As the Q&A came to an end, Kellan took a moment (being the amazing person he is) to congratulate me and tell me that he liked my photo. “Daniel, I just wanted tot take a minute to say congratulations on everything you’ve accomplished up there. They sent me over some information on you and you should be very proud.” At which point I may or may not have been smiling from ear to ear and blushing. He proceeded to share my excitement with all his adoring fans. Hands down, my favourite interview of 2016. Thank you Kellan for being such a wonderful person. You truly are inspiring!

You are the best Daniel! Hope you get to be #thenextmrclean Love to Canada! https://t.co/z9LBkAAMJp

Remember to enter #TheNextMrClean Contest by heading to the official entry website here!
To join in on the social media conversation around this exciting contest with Canadians from coast-to-coast, make sure to follow @KellanLutz & @RealMrClean on Twitter, @KellanLutz on Instagram and of course ‘Like’ The Mr. Clean & Kellan Lutz Facebook Pages. Tag us in your photos using the #TheNextMrClean hashtag – we can’t wait to see your entries!
For more behind the scenes of this and other amazing brands we are working with around the world, make sure to follow along with the #DoTheDaniel Instagram account. We would love to have you join on our adventures! AND yes. we’re on Snapchat too! – click here to follow us!