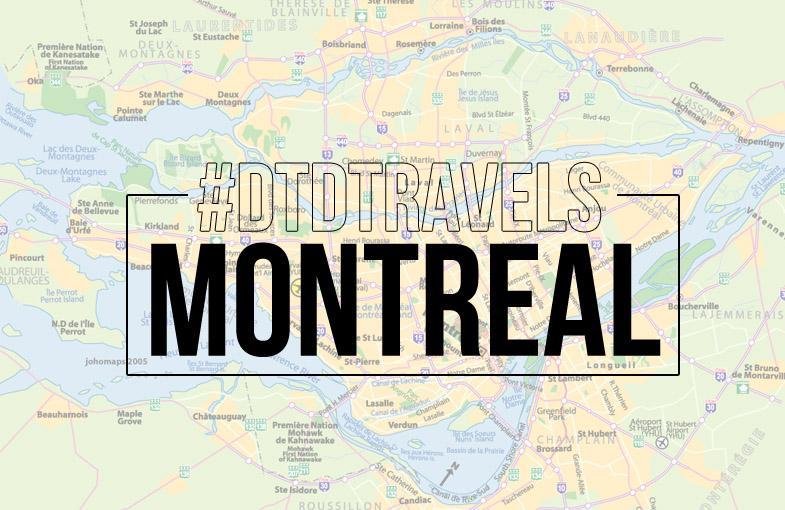 This is Lyric’s first “summer break”, and also the first time I realized just how much he TALKS, and how LONG a day can be! haha! So, we decided that maybe a change of scenery and a change of pace was just what we needed. I didn’t want to waste an entire day driving somewhere so we decided on a fun little weekend away to Montreal. With only being about 2 hours away, it was the perfect destination for us.

Now, it’s been a long time since I’ve been to Montreal, and never with Lyric, so I hopped on Google to see what there was to do. I quickly found out just how much Montreal has to offer! From museums, to parks, to activities, to festivals, Montreal left me wondering how I was going to fit it all in. The official Montreal Tourism site has a blog that was full of helpful information and even suggestions on itineraries to suit everyone’s needs! A great resource! To help YOU on your trip to Montreal, I thought I could list a few of the things we did that stood out! (Be prepared… I’m a picture lover!)

When most people think of Montreal, and things to do with kids, they automatically think of the Biodome. I was a fun and quick spot to see tons of animals, and would be a great rainy day activity as well since it’s all indoors. I read a good tip online to go early, and they were right! We got there just after 9am (they open at 9), we could go at our own pace, and were almost the only ones there. It was a great way to get up and close and be able to see everything without struggling to get your turn.

Opened in June of 1992, the Biodome is home to 5 different ecosystems, Tropical Rainforest, Laurentian Maple Forest, The Gulf of St. Lawrence, Labrador Coast, Sub-Antarctic Islands. As well, there are separate spaces with a variety of exhibits such: Insectarium, Botanical Garden, and Planetarium. For more information: check out the Space For Life website.

This, I’m not going to lie, was my FAVOURITE part of our trip. It was something completely different than the usual and such a thrill. I couldn’t believe Lyric was allowed to go, but he LOVED it! “Since SkyVenture Montréal opened in 2009, dozens of persons with mobility impairment have come to defy the law of gravity and have left grinning from ear to ear.”

SkyVenture Montréal has created an ideal environment where the military can train with their own equipment, recreating the unique reality of military parachutists. In fact, the very first vertical wind tunnel was built to train military personnel. The SkyVenture Montréal wind tunnel reflects that legacy. The academy is available to improve your techniques and make progress with a coach for all disciplines: Formation Skydiving (FS), 2-Way, 4-Way and Freefly (Back Flying, Sit Flying or Head Down). Also available for meetings, corporate events or birthday parties, what a perfect way to make an impression. 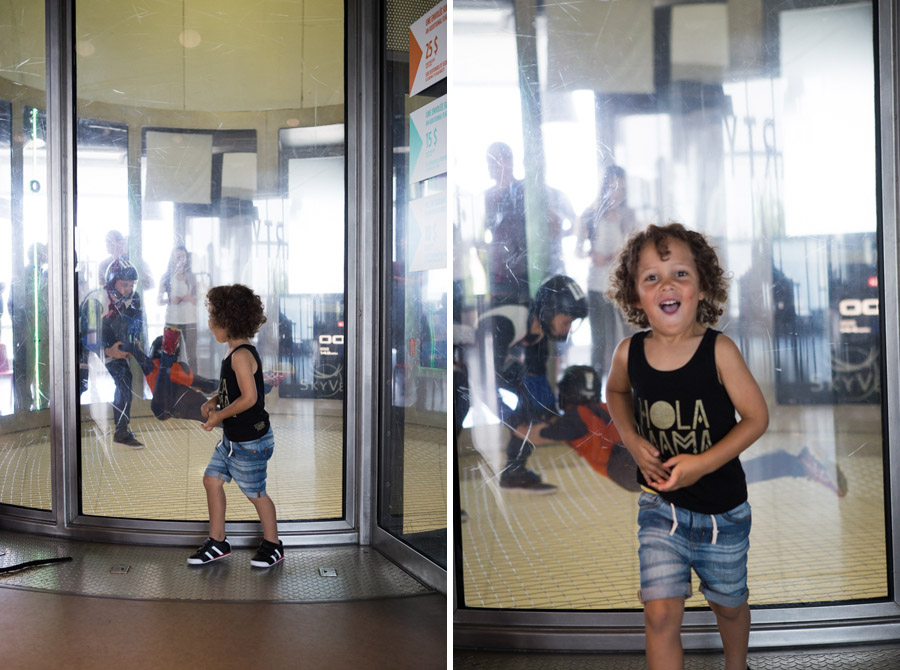 The moment I told Lyric that he was going to get to fly! (He thought only I got to go) 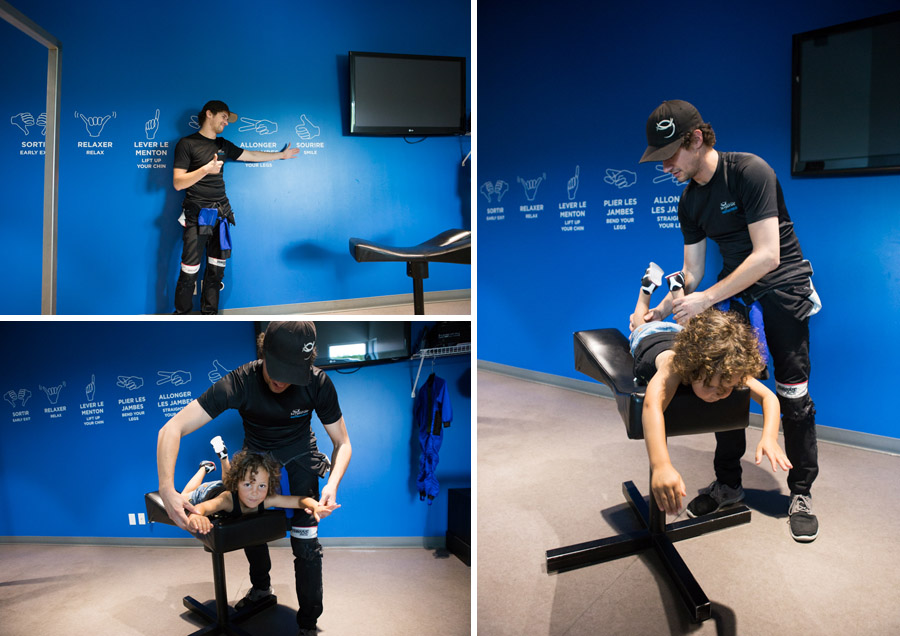 We watched an instructional video that gave us a brief overview on what was about to happen. As well our coach, Guillaume, helped us learn the hand signals he’d be using inside the flight chamber to help us stay steady, and most of all relaxed! Guillaume has been an instructor at SkyVenture Montreal since 2012, as well he competes in different disciplines like Neo-Freestyle, Artistic Freefly and 2-way Dynamic flying! When he finished coaching our group, he put on a demonstration of some of his skills, it was insane! Check out some videos of him doing his thing here and here! 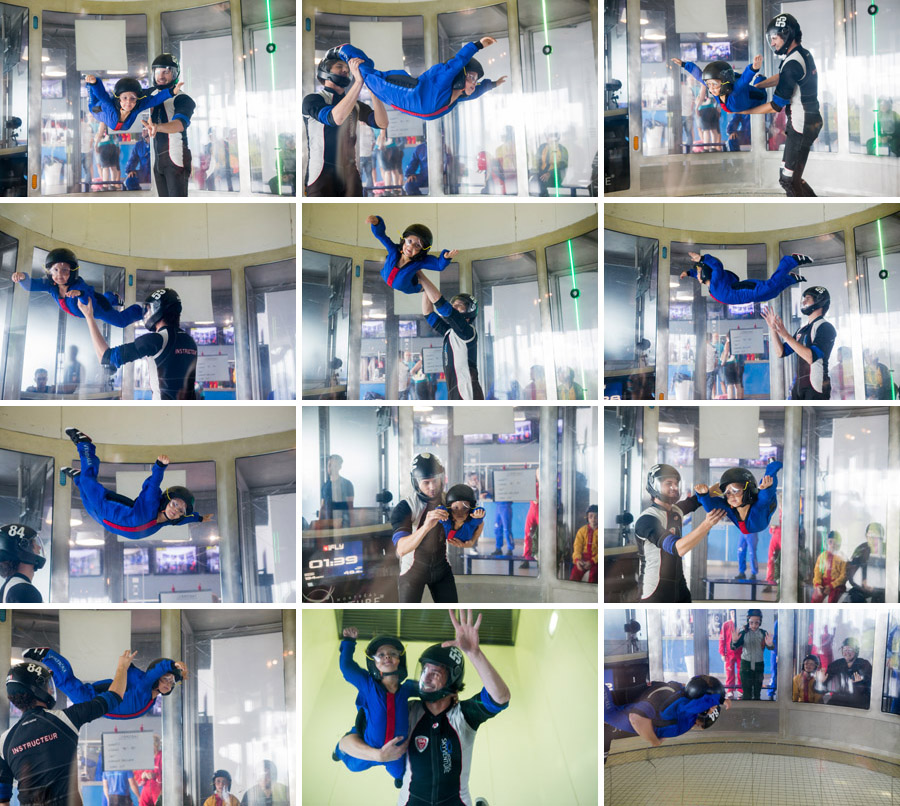 Can you say AMAZING? He just jumped right in there like he was at his park going on the slide. And can you see my proud Mama face in that last photo? If you have purchased the additional tandem jump, the coach will take you to the top of the flight chamber and back down a few times. Let me tell you, I had to apologize to Guillaume after for screaming (of joy) the entire time! Way too much fun.

Located in the Old Port of Montreal, the Montreal Science Centre is a MUST for families. Opened in 2000, it’s the second largest complex of its kind in the country. An institution totally dedicated to science and technology, the Montréal Science Centre is known for its widely accessible, interactive approach and its focus on innovation and local talent, in a setting that is both educational and fun.

With tons of hands on activities, it was a day well spent! Lyric loved the Fabrik – Creativity Factory. I learned that I am not an engineer by nature, but it was fun to see how his mind worked to put things together and make them accomplish the challenge! We even got our creation to sail in the wind, yay us! 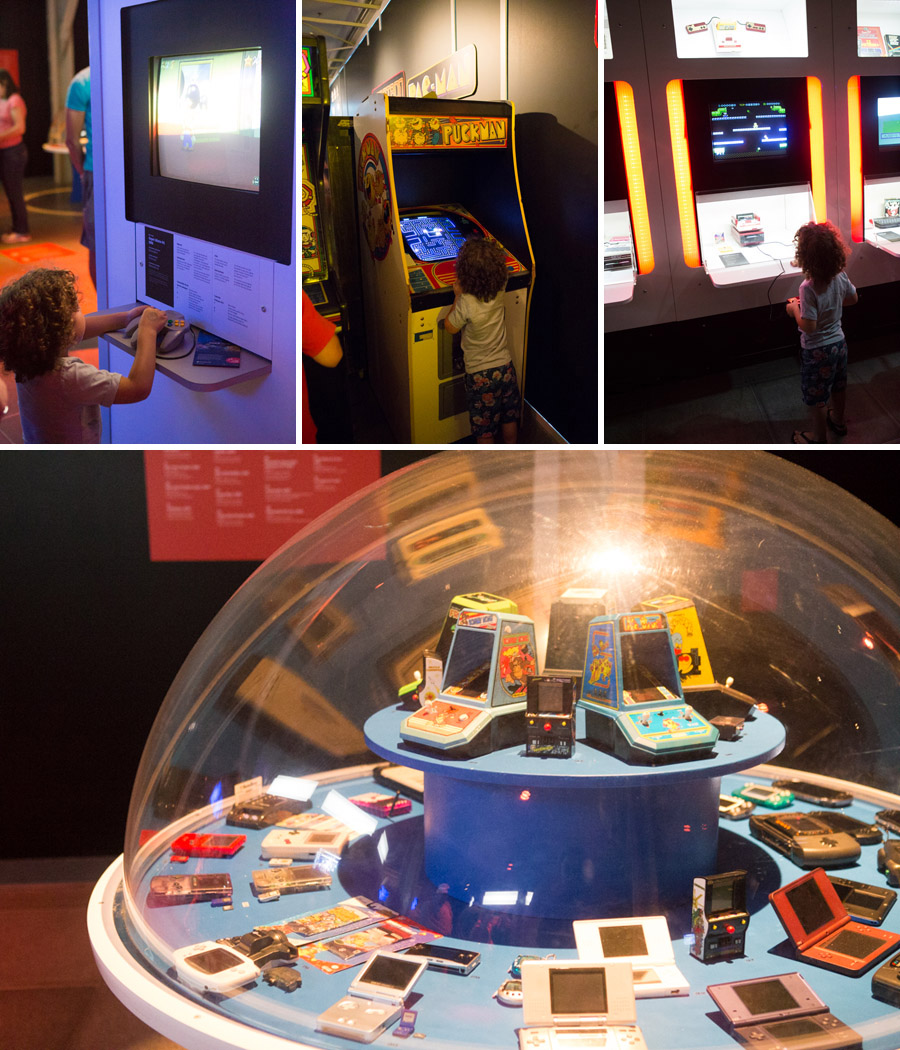 One of the temporary exhibits there until September 13, is Game On. Game On is a voyage through time exploring the very first computer and arcade games right into the technologies of the future. With over 100 games right on site, it’s a good thing they have extended hours on Fridays and Saturdays ’til 9pm! Lyric thought it was the greatest! The squeal every time he found a console playing Mario or Sonic, and even watching Nana and I play Rock Band made his day! A definite visit! 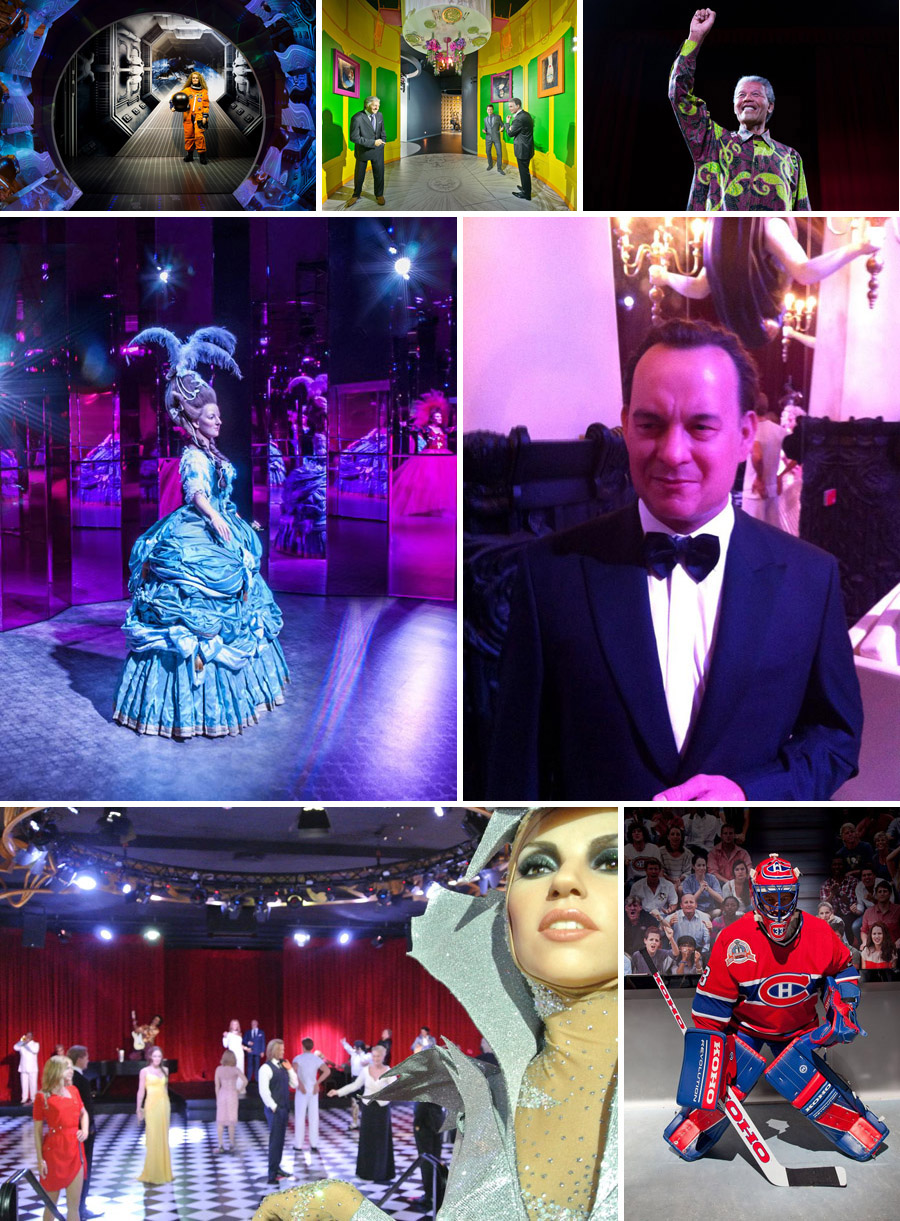 Their first temporary exhibit opened on June 18 and will run until October 4, 2015: The World in Mega Bloks®, designed by Ludovica Miniland. This spectacular exhibit built entirely out of Mega Bloks® bricks, consists of close to 2 million blocks, with over 80,000 of them dedicated to the reproduction of the world’s tallest tower, Dubai’s Burj Khalifa. At a scale of 1:185, the Burj Khalifa replica will stand 4.5 meters tall, instead of 829. The exhibit’s meticulous builder, Gilles Maheux, is a former architectural designer who left his former career to develop miniature models with his son. 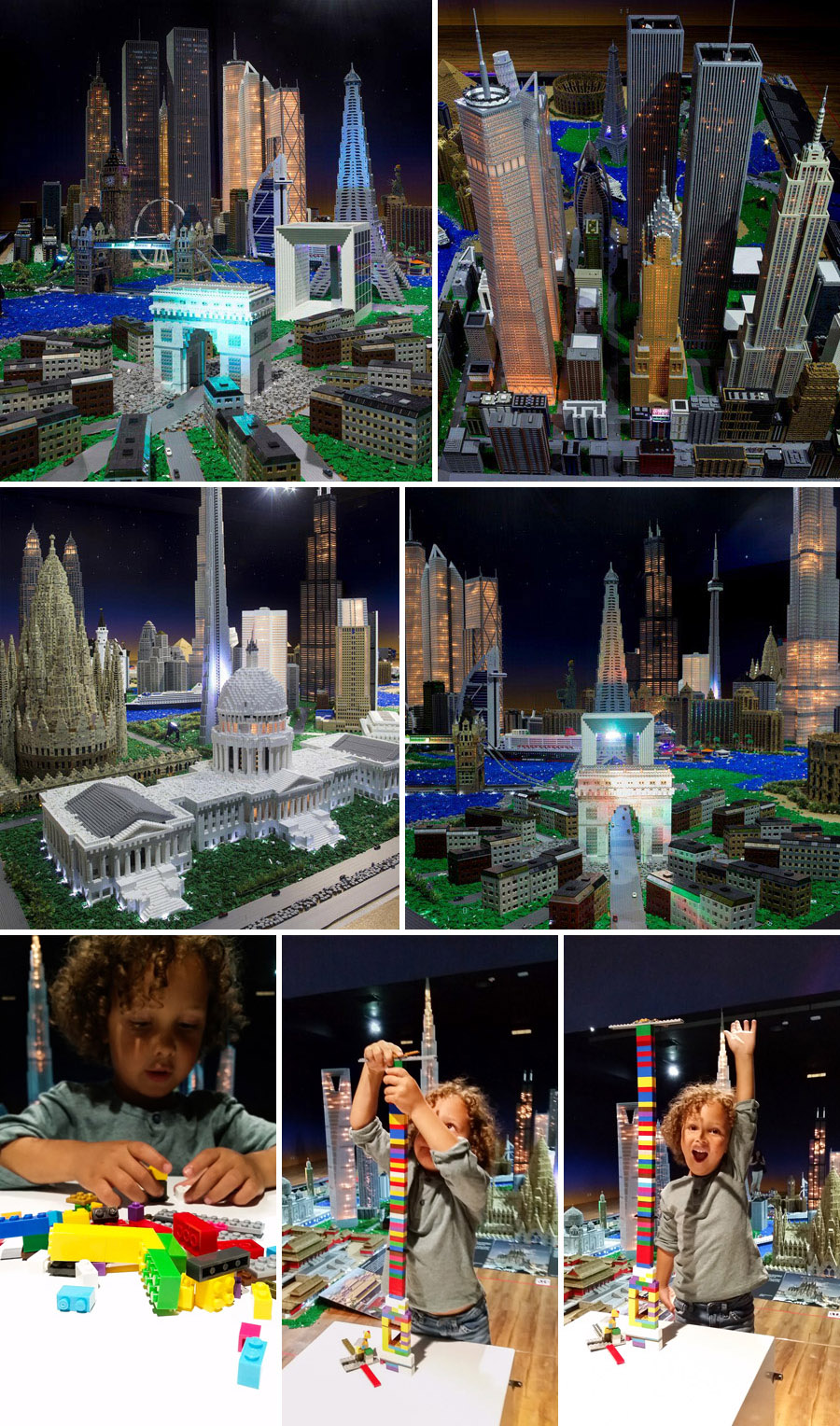 This was definitely Lyric’s favourite part of the museum, he was a little frightened of the wax figures. They were done so well!

So all in all, Montreal is an AMAZING city full of adventure, history, culture and fun! For your very own#MTLMOMENTS inspiration, make sure to follow @Montreal on Twitter and Instagram. I would love to hear what YOUR favourite spot is in Montreal to visit with your family!

Be sure to follow along on my mommy adventures & get a behind the scenes look into my life, by following my Instagram Account today. We’d love to have you join us!

Previous post:
Travel & Lifestyle | H&M & Katy Perry are ready for the Holidays! Next Post:
Contest | Summer just got a LOT better with #MenchiesMyWay!