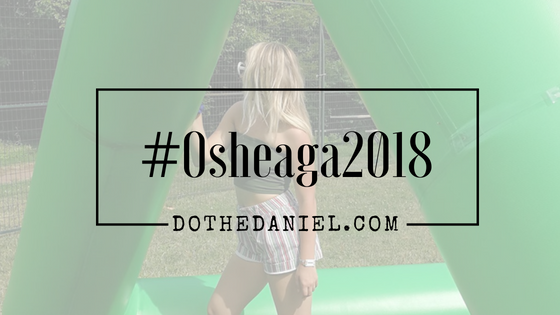 As most of you know, my Summer trip for this year was to Osheaga in Montreal. After attending last year, I just had to go back. Was it everything I was looking forward to and more? Absolutely. Yes. So that’s why I thought I would give you a little rundown of why it kicked so much butt. Here were my favourite performances in order: 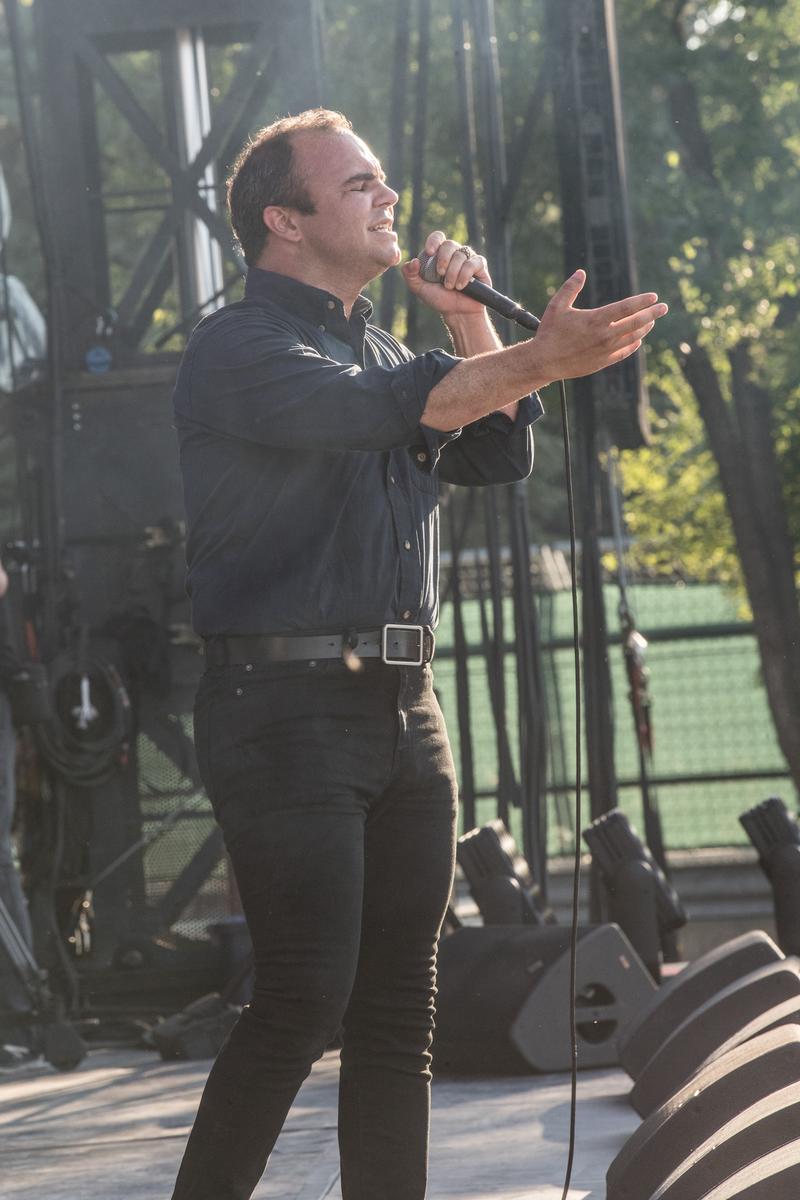 Future Islands honestly blew my mind. I’ve been a fan for years, but have put off seeing them. I went into their set with no expectations, no idea of what kind of performers they were, and no peaking the set-list (I’m typically the worst for that). They patiently waited on the stage for approximately 10 minutes as Blondie went into over-time, across the way. They stood patiently, until they demanded everyone’s attention opening with “Ran.” The energy was up-beat and spot on. Typically I find that it takes a little bit of time for the energy to be there once a set begins, but it was there right from the beginning, and was maintained right until the end of the set.

Singer, Samuel T. Herring, let out a big cry following the passionate performance of “Seasons (Waiting On You), which brought a feeling from the crowd unlike any other. We could all feel his intensity throughout the entire set and to see him release that so passionately while the crowd only applauded louder, was a moment I will never forget. 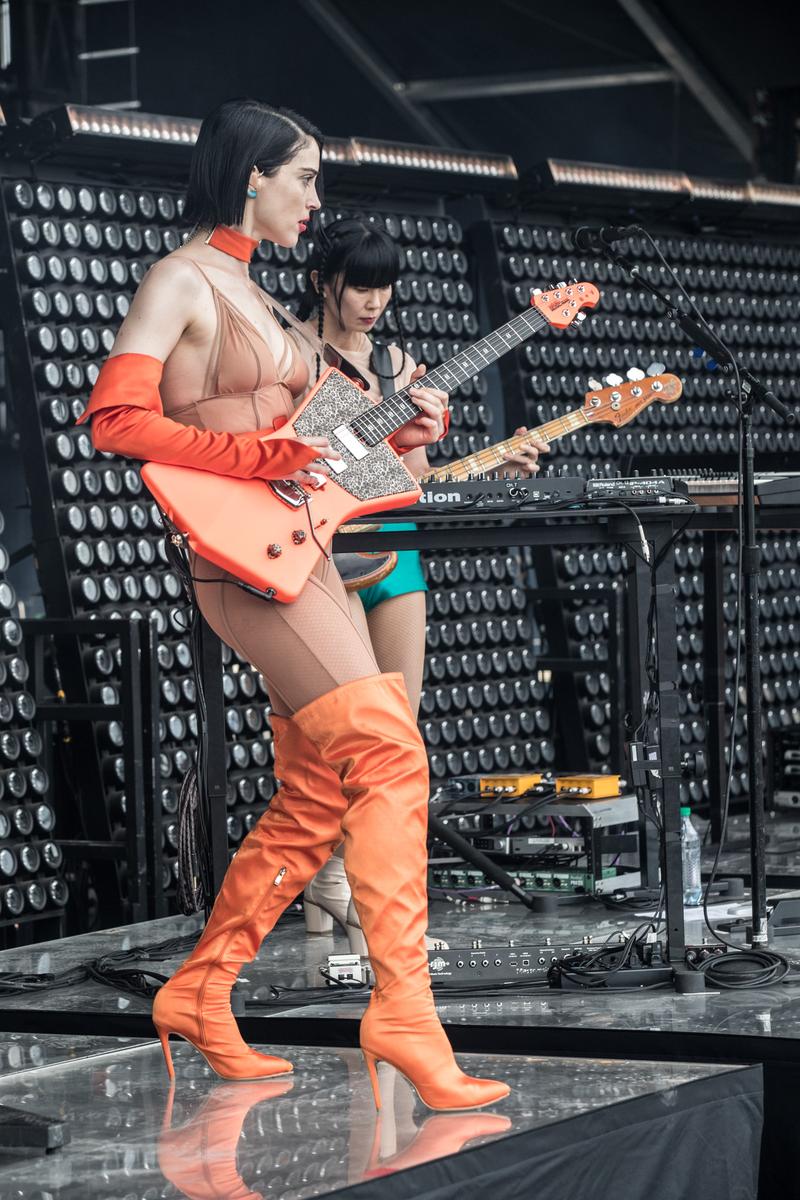 This was also another set I had been waiting quite a few years to see. She came onto the stage calmly in her skin coloured bodysuit, accompanied by neon orange gloves, boots, and bright red lipstick. Her band was wearing similar style clothing, while they all stood in a straight line to perform for the majority of the set.

I had expected something quite abstract from her, in which I received. She has an extremely powerful voice, that echoed beautifully through the grounds, along with her remarkable guitar playing. The visuals were odd, but in the best way possible, that was paired so perfectly with the performance.

I’ve described her performance to people as something to be “not human” or “alien-like.” Sounds strange, I know, but if you ever see St.Vincent, I think you’ll totally get what I mean. I feel like her performance is also a huge reminder to the music scene of just how powerful women leading bands can truly be. To say I was impressed would be a huge understatement. 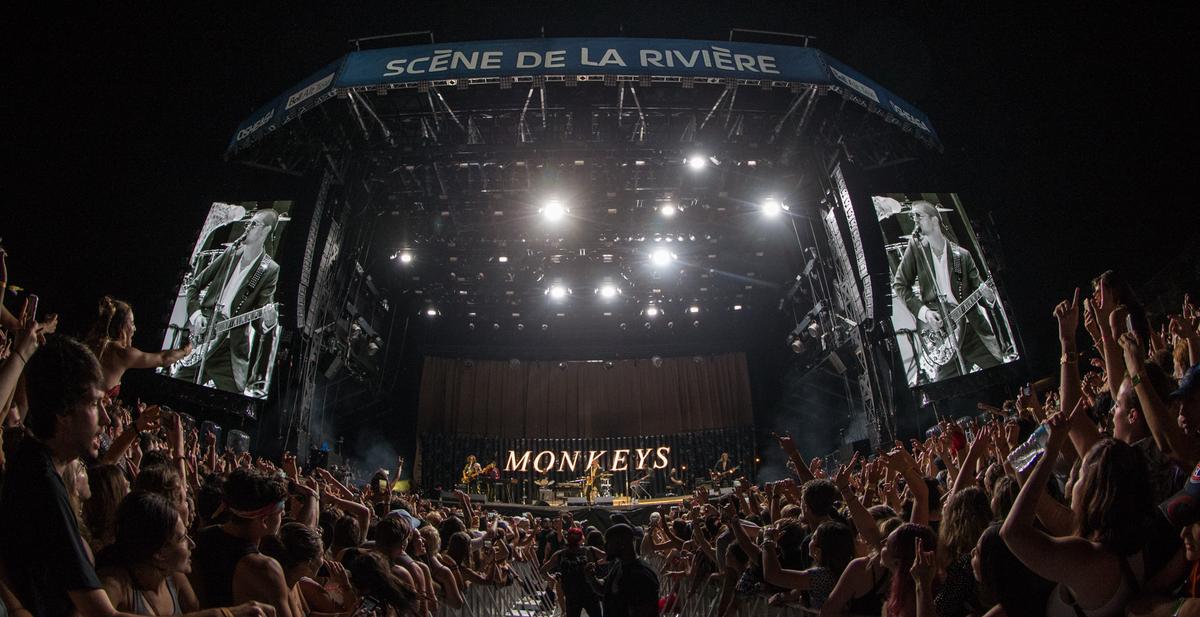 The Monkeys drew quite the crowd. The headlining band has just released their first album in a few years titled, “Tranquility Based Hotel and Casino.” It takes a very different approach to Rock n’ Roll as opposed to their previous album, “AM”, which brought their music to more mainstream attention, and increased their fanbase by a ton. As for their latest release, it has a more experimental and Psychedelic Rock vibe to it which I loved – it was truly the last thing I actually expected from that album.

Since they took a more Pop-Rock vibe with AM, and it drew the most attention out of their albums, I thought they would continue with that approach however, that’s not what happened. They utilized their audience they have attracted and used their base to bring a more experimental sound to a mainstream crowd – and I LOVE that.

Their performance was simply awesome. Singer, Alex Turner, is a true performer. He has an exciting stage presence, and you can tell that he loves it. They played just about everything you’d want to hear from the new and the old, and the crowd was loving it. I also had speculation on whether or not they would avoid playing newer material, as some artists will just play their most popular albums, but they didn’t! I was impressed. 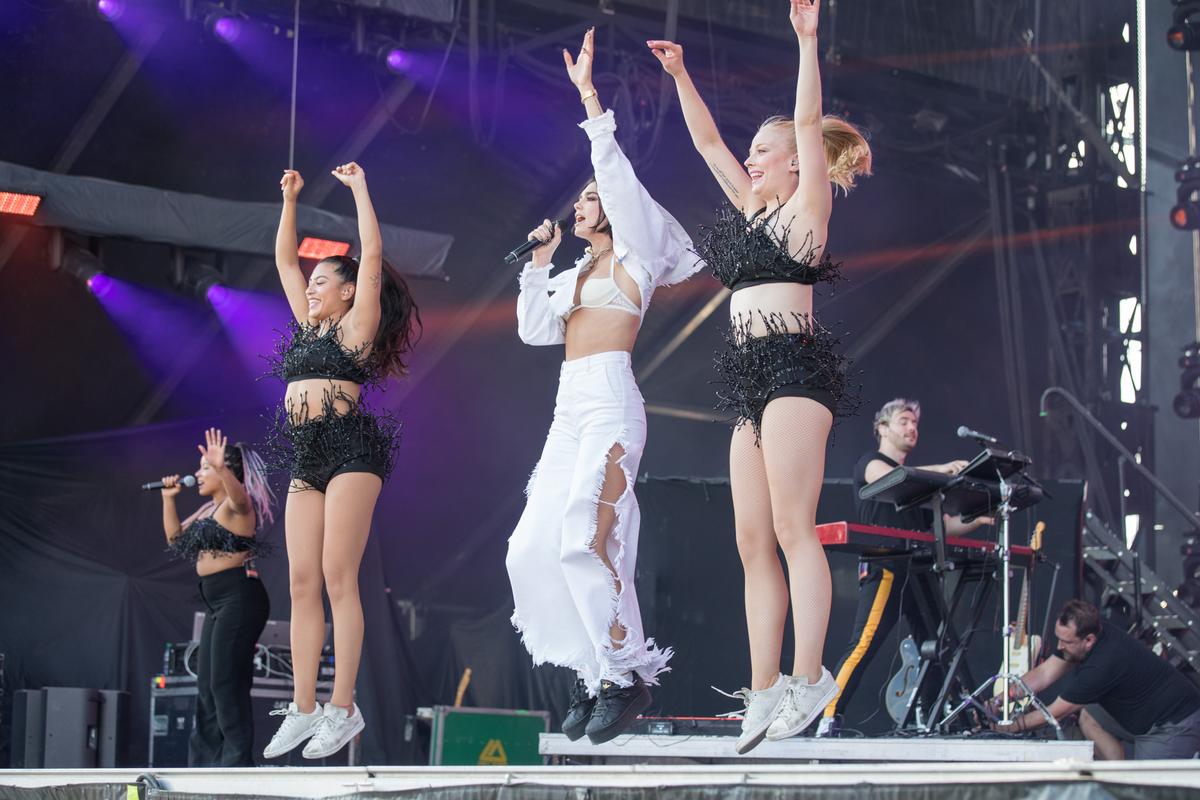 I was SO excited to see Dua. I’m not too into the Pop scene these days, but I sure am a sucker for Dua Lipa. She experiments with her Pop sound a lot more than others do, which I admire! As I mentioned before, I love artists that will push their sound and experiment with a large audience. She adds in elements of funk and electronic that differ from other Pop artists, and I am totally here for it.

She OWNED the stage between her demanding stage presence, and her back-up dancers. It was very much a planned show that was entertaining and exciting. She sounded just as she did on the record, and the entire audience at the main stage was dancing along and grooving to the beats! 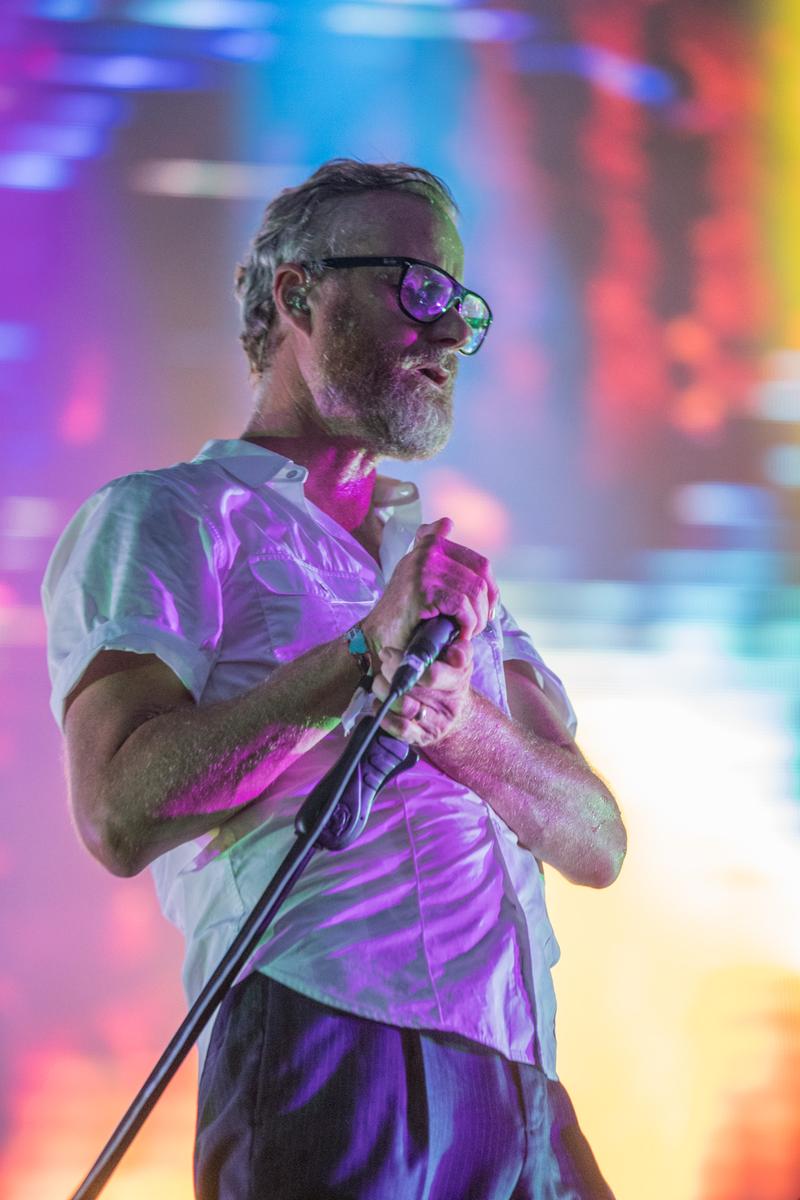 Ah, this performance was one I will never forget. The Ohio-based Rock band was one of the last to perform for the weekend, and it was emotional, powerful, and intricate.

The band consists of 5 people, along with a few extra to add to their live show. The lighting was simple, accompanied by equally simple visuals that went along with each song perfectly.

Although a lot of The National’s song can be dark, their newer album is a bit up-beat. With that being said, collaborating the new and the old, the set had the perfect balance. 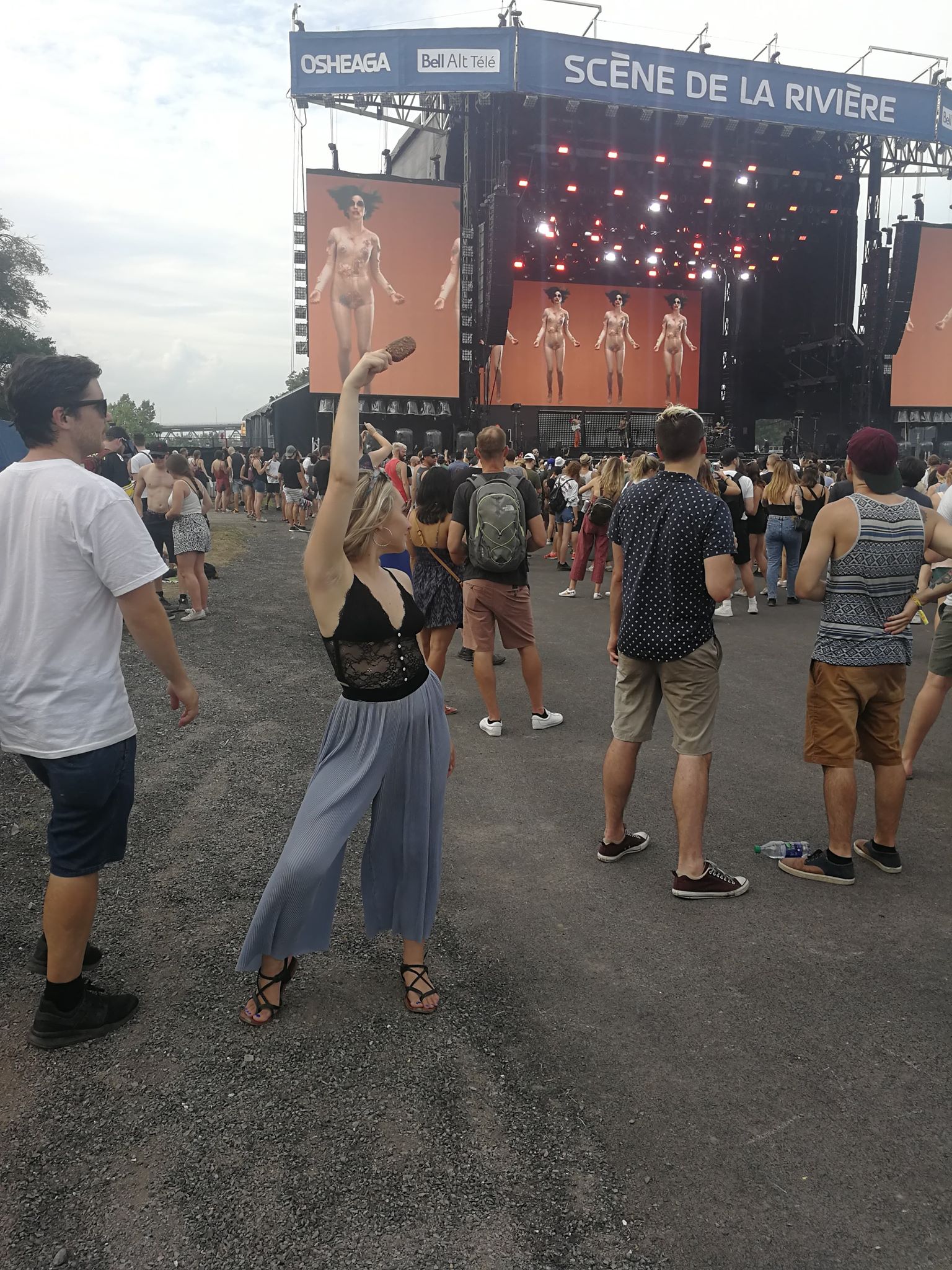 All in all, I loved Osheaga this year. There weren’t a lot of artists that I LOVED, but it consisted of a lot of artists that I’ve been listening to for years, but just couldn’t bring myself to buy a ticket. This is a big part of why I love festivals, because you pay one price to see artists that you may just “like”, but then come out loving them because of how great they were, and then even discovering new ones.

I danced, laughed, cried, and had an amazing time reuniting with friends throughout the sunny beautiful weekend at Osheaga. Thank you Evenko for putting on yet another amazing weekend that I won’t forget. 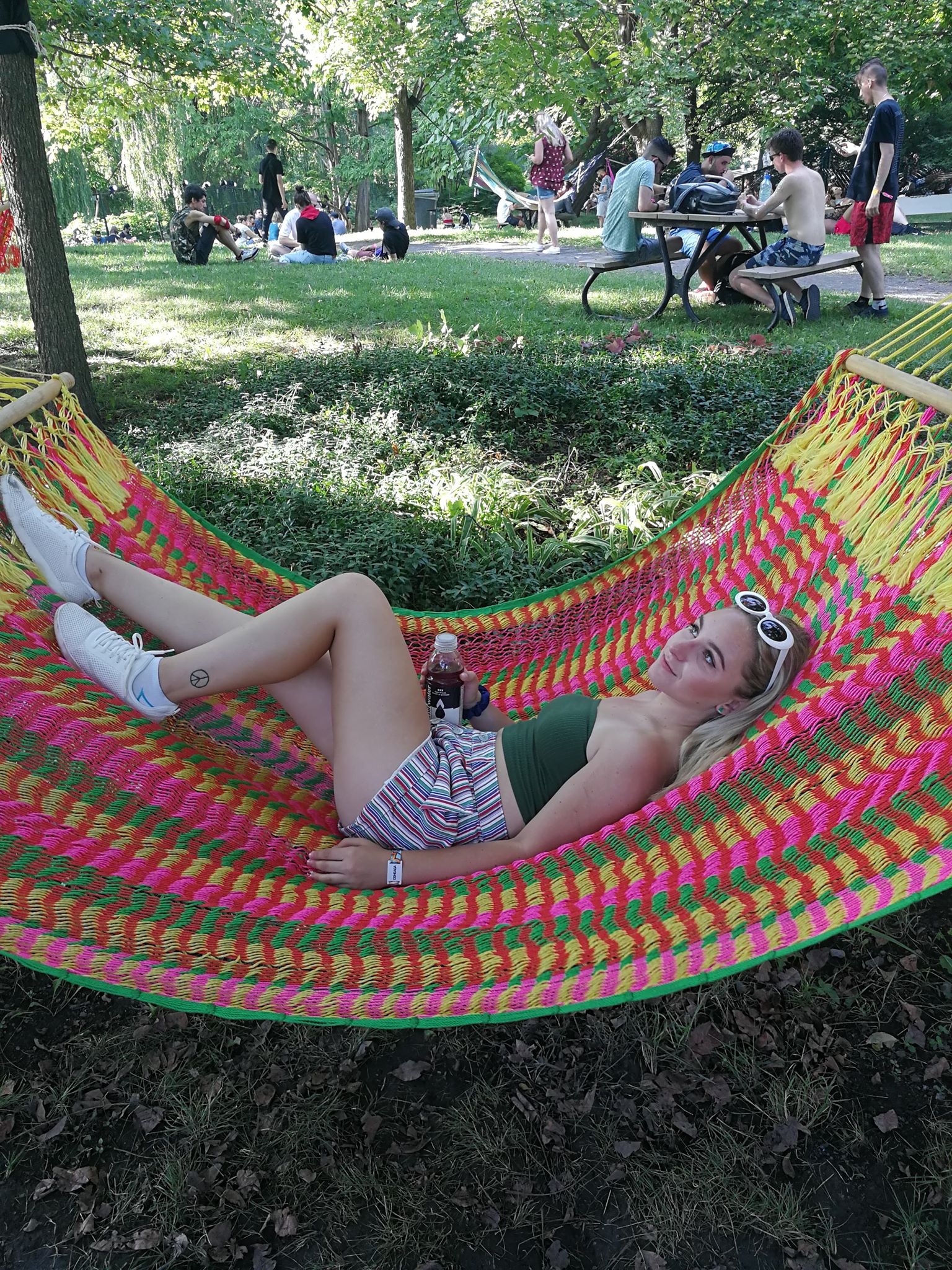 Photos by Gemma Mastroianni and Evenko

Previous post:
It’s The Most Wonderful Time Of Year Next Post:
Back to School On A Budget