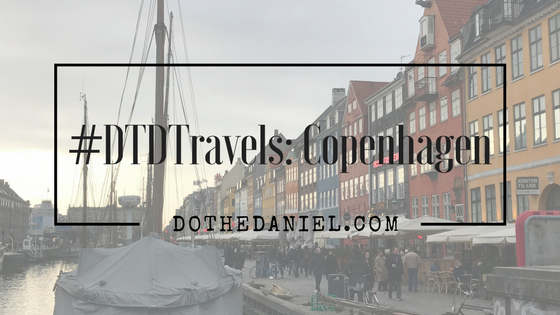 by Nicola Whyte • May 5, 2017 • Travel & Lifestyle • Comments Off on A Mini-Break in Achingly Cool Copenhagen •

A Mini-Break in Achingly Cool Copenhagen

I have been wanting to visit Denmark for a very long time. It’s been on my hit list – and since I have been visiting Scandinavia a lot recently, it felt timely to head there next. So I grabbed my fav travel buddy Liam, picked up a great fly/stay deal through British Airways, and off we headed for culture mini-break.

We arrived on a rainy and cold night – it was still winter after all, so heavy coats and boots were a must. We had booked our flights through the BA Holiday Finder service, which is a great way to find new destinations and good deals with one of my favourite carriers. Our hotel, The Copenhagen Crown, was centrally located, and about a 5-10 minute walk from the train station. I was delighted to discover, that the train station had a huge 7-Eleven, and that it stocked mainly paleo food, hurrah, I could eat just about everything guilt free. This was to be a feature of our holiday, it turns out that the Danes are big on Paleo! I’d recommend booking in advance though, hotels in copenhagen
can fill up pretty quickly at peak travel times, so book early to get the best deals! 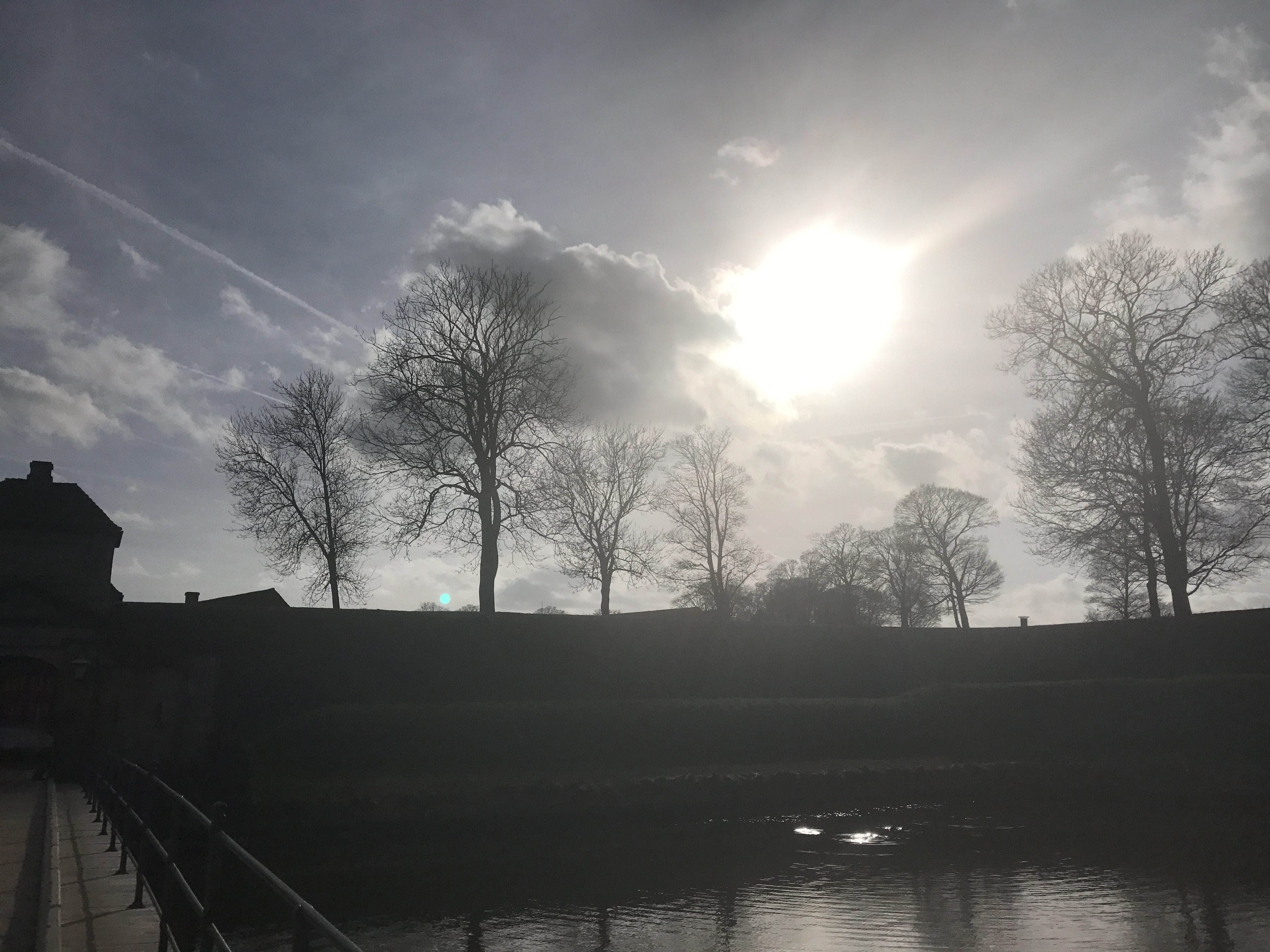 It was late, so I grabbed a seed bread sandwich, we checked in and then headed out for a well earned drink. There is a small square not far from the hotel that hosts a number of bars, but we opted for something a bit smaller and found it in Vinbaren Vesterbro, a small wine bar that had a really nice vibe.

The next day, we were excited to see that the rain had cleared and that we were greeted with a sunny, crisp day. Perfect for cycling. Cycling is the only way to see Copenhagen, even for a novice like me. I am not a natural cyclist and the thought of cycling in London terrifies me, but in Copenhagen, there are segregated cycle lanes and all of the traffic makes way for bikes. We walked a way along the river and found a cycle hire, there are loads of these, and I was delighted that mine came with a basket. And off we went. I was rather nervous, but we kept to the cycle paths through parks to begin with. 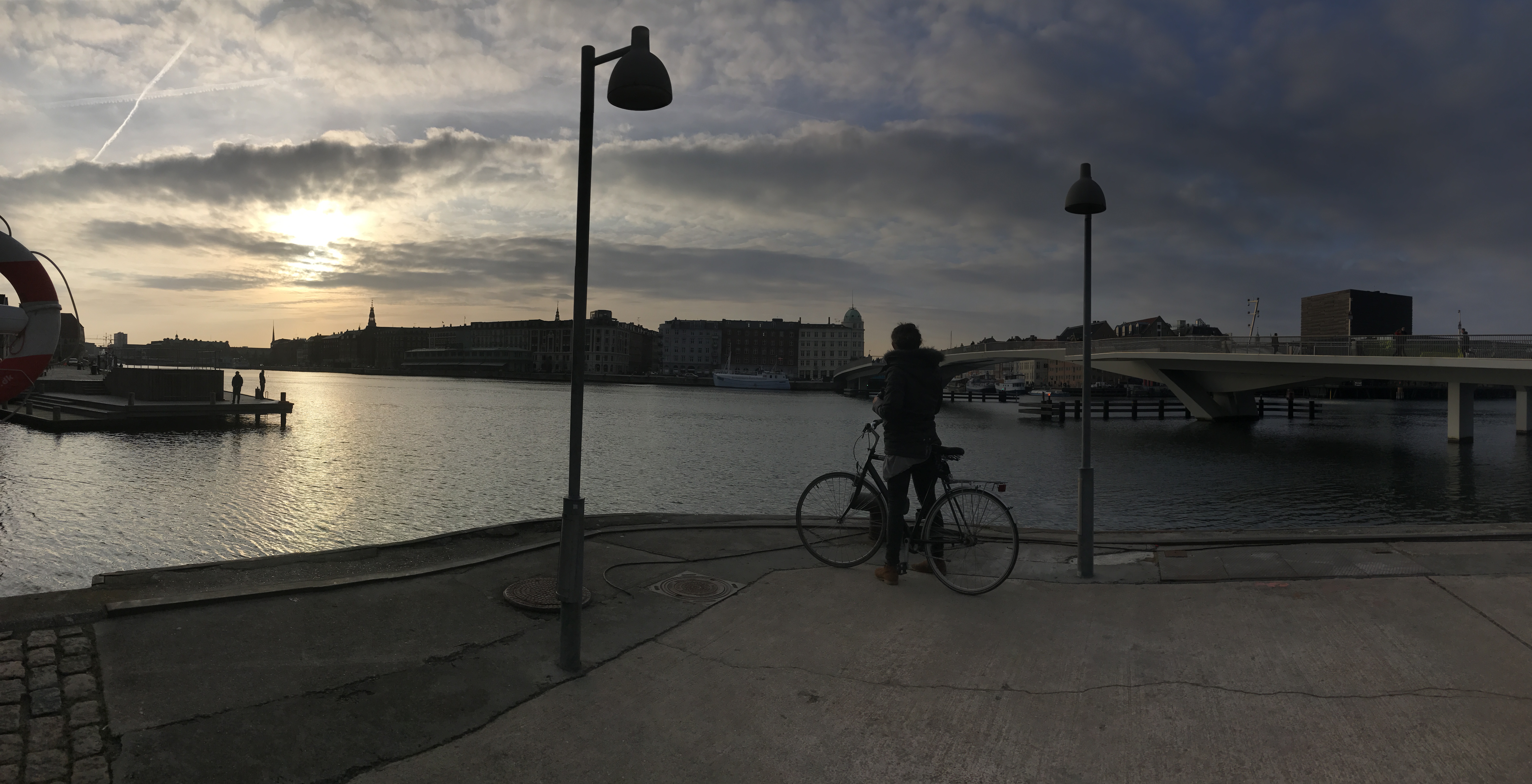 Liam was hankering for a coffee at this point – I cannot blame him, trying to keep me in check on my bike! So we headed to a very trendy, alternative street – Jagerborgarde. Here you will find small coffee shops, jewellery makers, artists, cactus shops, and of course a book shop. I was delighted by this street. Liam had stayed here before, so grabbed us his favourite pastries, himself a coffee, and we headed out to explore. Of course I found the taffy store. You can watch this being made through the large bay window, and once inside the smell of amazing treats is just delightful. Karaemlleriet is a must do, with so many flavours, it’s a great gift from your time in Copenhagen. From there we browsed some amazing art stores, wished we could bring home some cacti and succulents, and in the book store, I picked up a Colour me Swiftly, Taylor Swift colouring book, on special. This street is must visit. 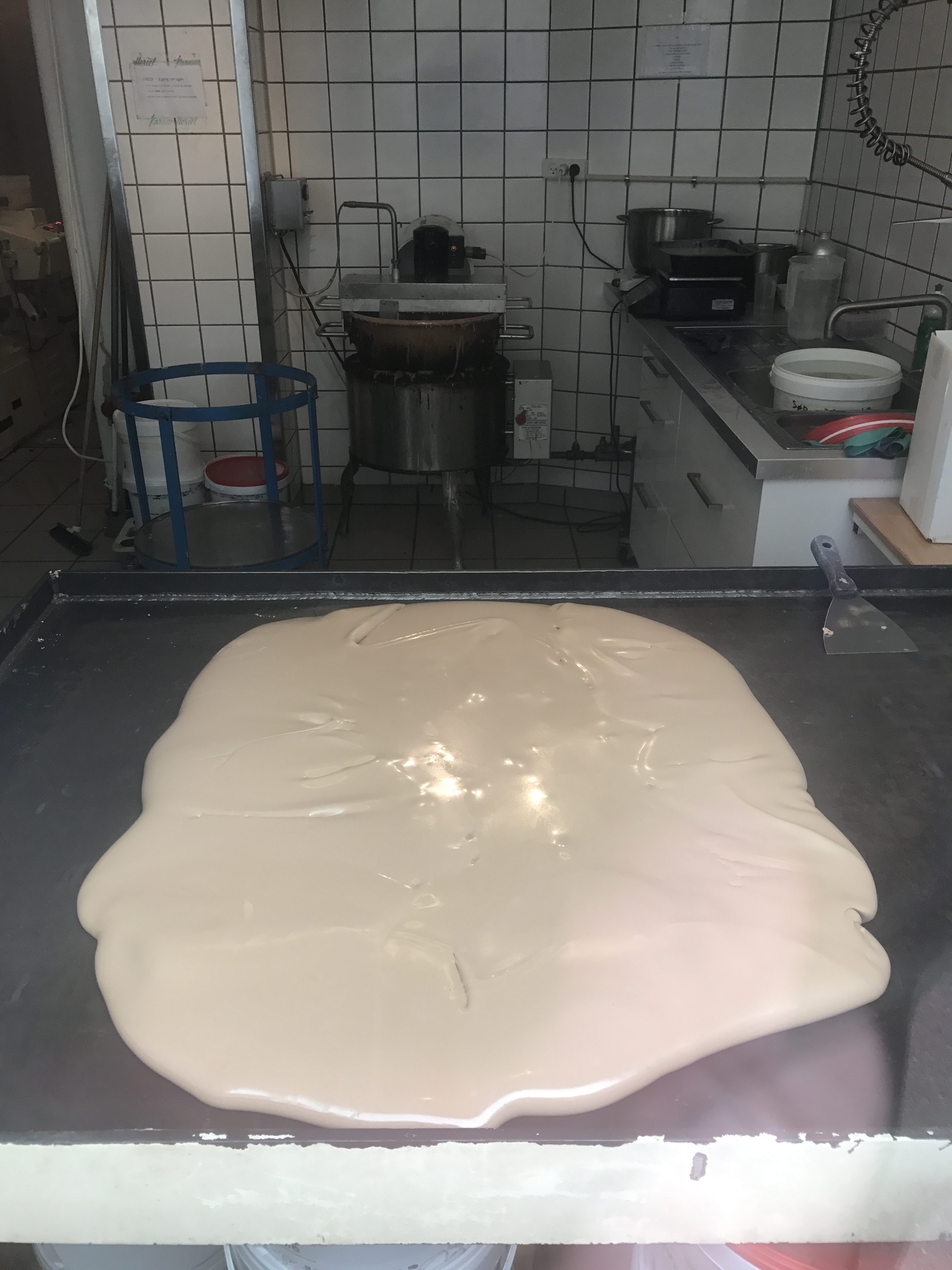 It’s very close to the cemetery, which is an odd tourist destination, but having visited some famous graves around the world, I had to add this one to the list. Copenhagen is slightly obsessed with Hans Christian Andersen – the writer of many a children’s fairy tale. His grave is fairly plain, but it is covered with drawings that children have left for him, of the characters and themes of his fairy tales. The cemetery itself is a lovely peaceful place for a wander, and there were loads of mothers taking their babies for a walk in the quiet.

From there it was time to head to discover some of the other delights of Copenhagen, and by this I mean the food scene. Copenhagen is home to Noma, one of the best restaurants in the world. This has led to a city of amazing chefs and delish food. A speciality is Smørrebrød – this seems to be where you chose a selection of small plate dishes, mainly seafood, and eat them with a large glass of prosecco. Ok, the prosecco was my own addition, but it would be rude not too! We headed to Torvehallerne, which is a huge glass food hall and market. You can buy fresh fish, gourmet sweets, juices, paleo food, coffee and speciality alcohol. We had a shot of schnapps to round out the experience, for less than the cost of water.

Next stop was the park that houses a military fortress, as well as boarders the harbour, where the statue of the Little Mermaid can be found. I told you they were obsessed. The park is lovely, there are lots of maritime themed statues everywhere, and it’s nice to bike around. The Little Mermaid herself is surrounded by tourists, but is in a beautiful setting. On a clear day, like the day we had, she looked serene. 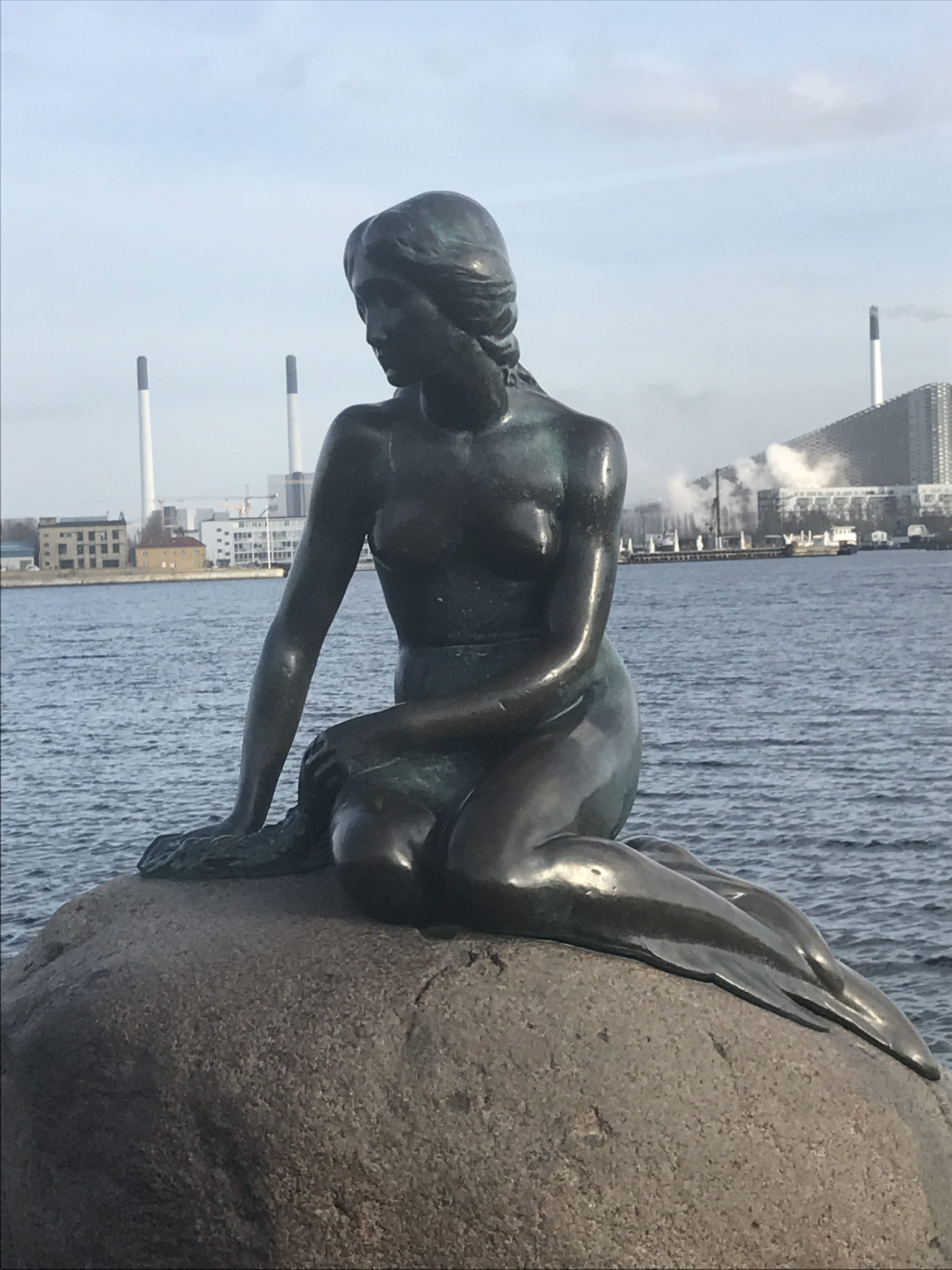 From here, it was off to Christiania, or as it’s officially known, Freetown Christiania. Christiania was set up in 1971 by a group of hippies – and is now its own official area, leased from the State. Here the main rules are be nice and don’t take photos. This is a very alternative area, where drugs are smoked openly, and the people seem peaceful and friendly. We arrived here just after 4.30pm, so we were in time to see a mixing of the crowds, the people who obviously live there, and the people who are visiting after work. We grabbed a cider, which felt earned after all the cycling we had been doing (mine coupled with a few spills), and enjoyed watching the people around us. A walk around the village saw many people chilling out watching the sunset and sparking up. Most of the buildings are covered in art, which would have been great to photograph, and I laughed on the way out at the signs for the various services there, advertising their Instagram. Whilst we were here, we decided where we were going to head for dinner. 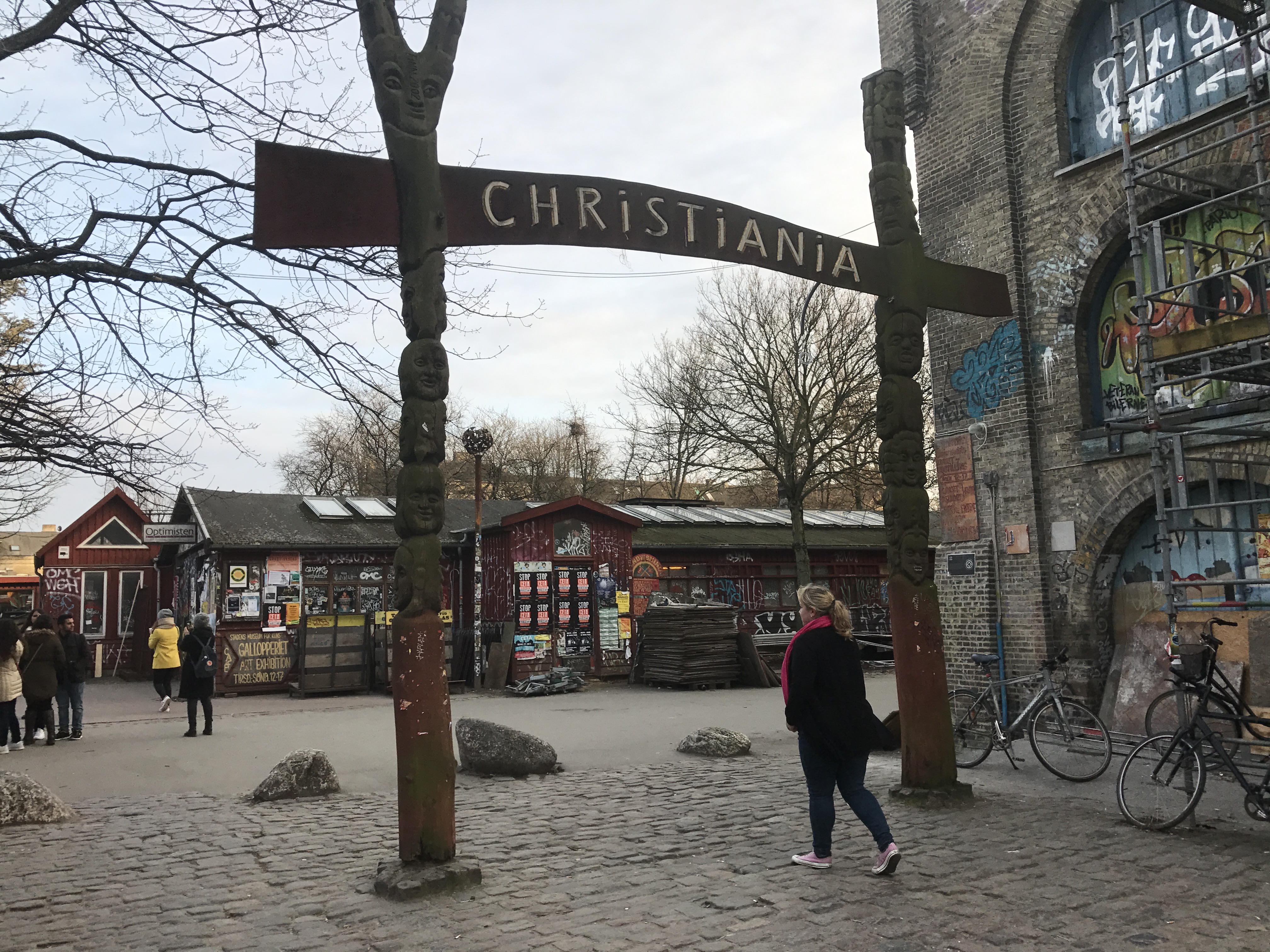 We decided that whilst we could not afford to spend a month’s rent each at Noma, that we would treat ourselves. We decided on Amass. The head chef and owner has impressive credentials, and had also been at Noma in the past. We were in for a treat. About a 20 minute cycle from Christiania, sits an old bread factory. This is the setting for Amass. The restaurant is on the ground floor, with impossibly high ceilings and street art on the walls, it is achingly cool, and exactly what I was looking for in Copenhagen. The staff are very attentive and every dish was explained to us by a different chef each time. 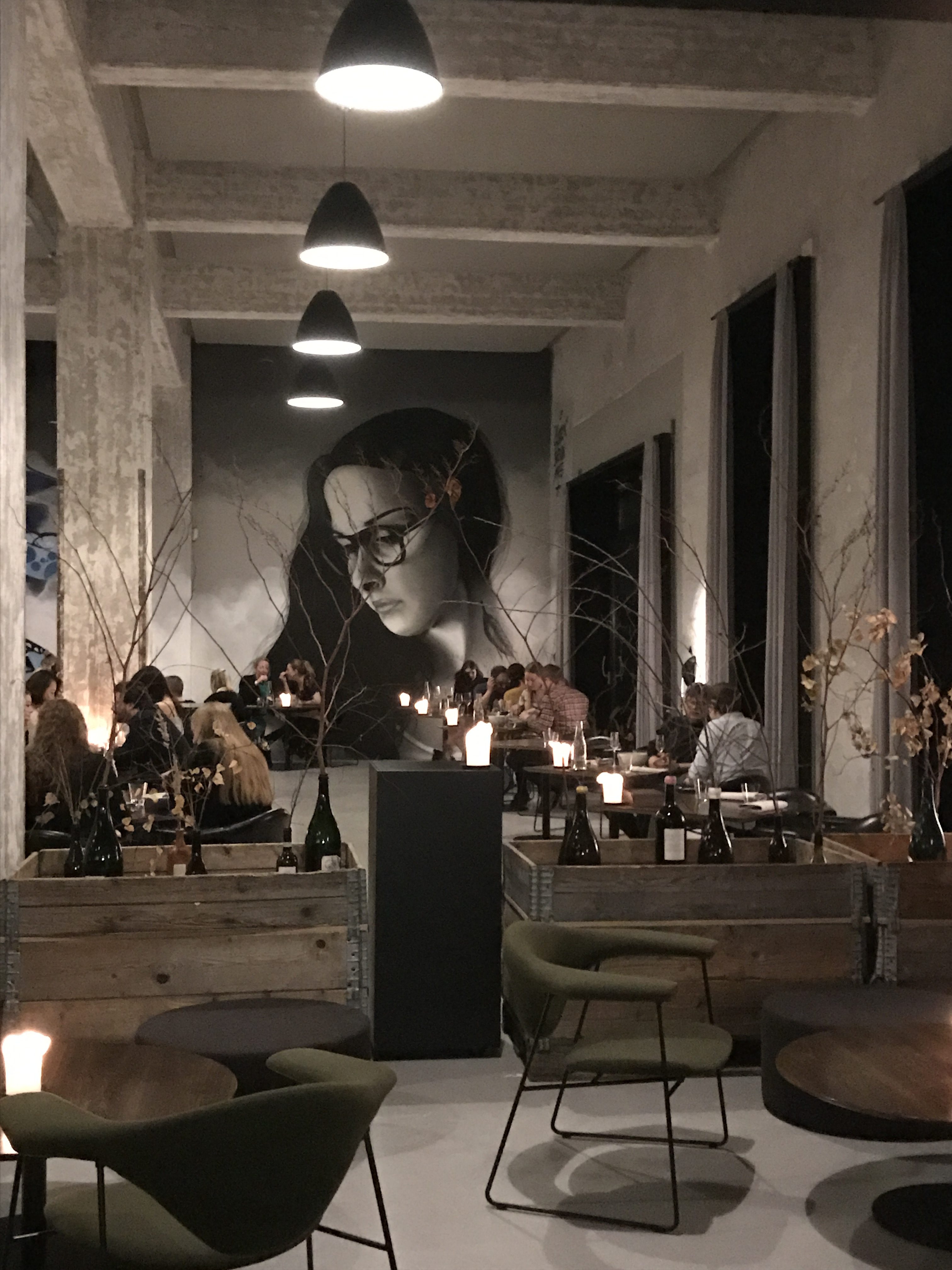 The chefs are from all over the world, and even one from New Zealand. The produce is grown on site, and even the bread is made there and delivered to your table, wrapped as if it’s in a blanket to keep it warm. We opted for the nine course degustation and were not disappointed. Each dish was perfectly balanced and flavoursome, and small enough that you could eat the whole nine courses without feeling as though you had eaten too much. Liam opted for the wine pairing, which I wish I had done as well, instead, I opted for some well chosen gin and a glass of prosecco. I loved everything about this experience. The other diners who were a mixture of families, couples on dates, both casual and dressy, all at home in the setting. The staff were friendly and kind. And of course the incredible food. I would recommend this place as an experience. After all of that, it was an hour bike back to our hotel, and the cold definitely sobered me up somewhat!

The next day, we headed around the corner to a porridge café – of course there is a porridge café in Copenhagen, by this point, I was not expecting anything less. Bowl Market is a mainly vegan restaurant, who by the time we got there after a cheeky sleep in, was filled with English ex-pats catching up. I had an amazing porridge with lemon and blueberry toppings. It was filling and so warm, when it was so cold outside. 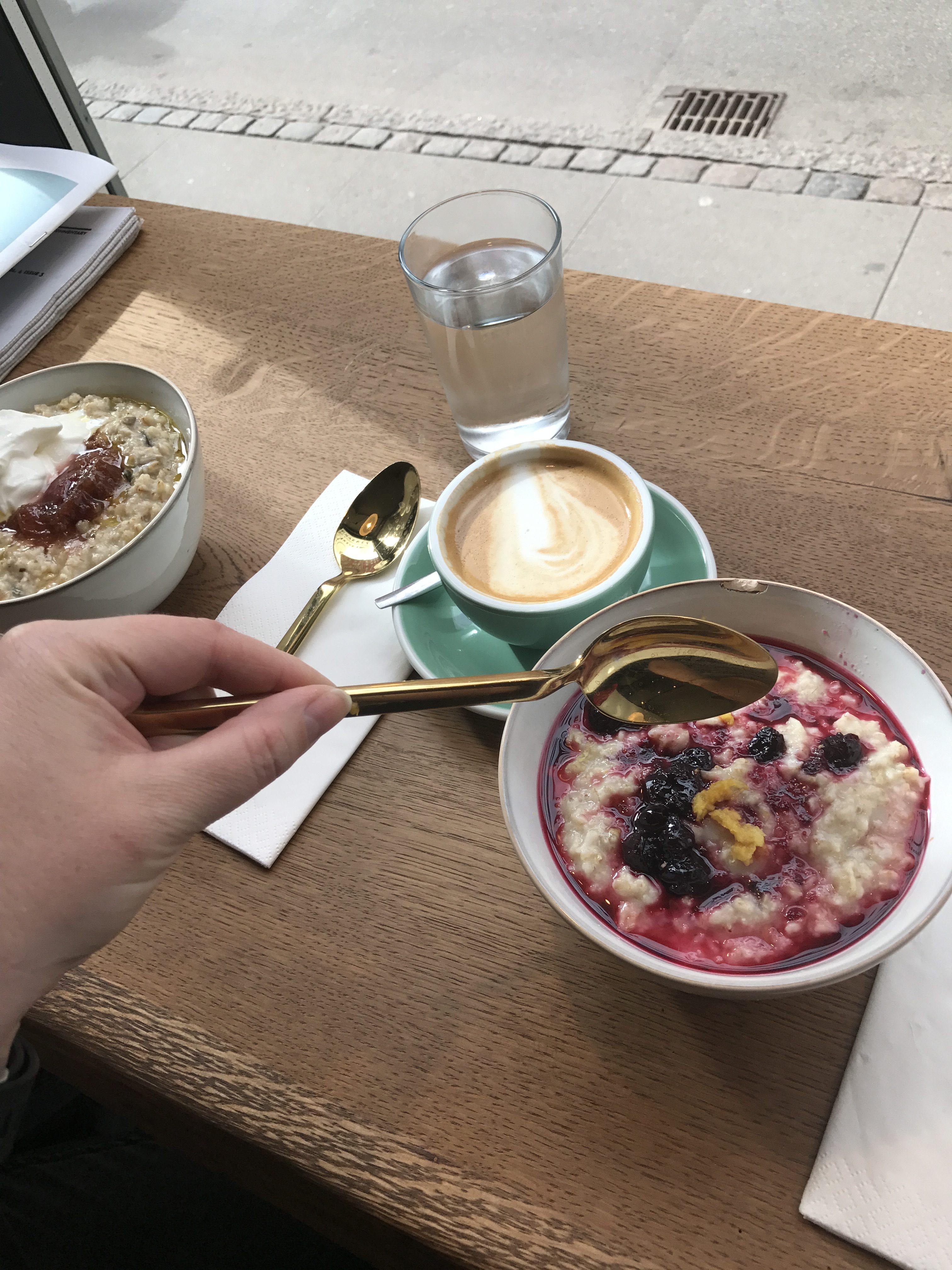 After a filling brekkie, it was time to return our bikes, after biking along the canal to drop them back, we found ourselves an Irish bar, as it was St Patrick’s Day. As I ordered Liam a Guinness and myself a baby Guinness (Kahlua topped with Baileys – this looks like Guinness), it started to bucket down. It was a great way to spend our last hour in Copenhagen, cozied up in a pub. We watched the parade down from the dry inside, it seems that there was a three legged version of a pub crawl, which I am sure would have gotten rather messy as the day wore on!

I was sad to say goodbye to Copenhagen, it was a short visit, that we took at a leisurely pace, but with much more we could have seen. All of the people that we encountered were friendly, kind and helpful. If you have a spare few days, then I would definitely look at Denmark!