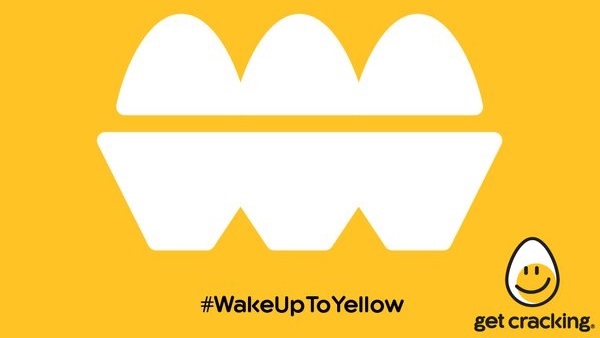 by Daniel Reyes Cocka • February 24, 2016 • Contest, Food & Wine • Comments Off on Contest | We love eggs so much we’re giving you another chance to #WakeUpToYellow & Win! •

Contest | We love eggs so much we’re giving you another chance to #WakeUpToYellow & Win!

For those of you who follow along on our social media adventures, you’ll have seen that at the beginning of the month we celebrated #WakeUpToYellow bright and early with Egg Farmers of Canada. To show Canadians the importance of starting their day off with local eggs, egg farmers gathered in major cities from coast to coast handed out delicious egg sandwiches and yellow daffodils to morning commuters. We also told you about a chance to win the amazing #WakeUpToYellow prize – and we had so much fun doing it that we are running a second contest worth over $500!

Hey Toronto! Come down to Yonge-Dundas square right NOW (7:30-11:30am) for a great way to start the day with free egg sandwiches and daffodils ☀? #WakeUpToYellow

I got to #WakeUpToYellow today and will colourize the office with these beauts. @not_likethemermaid, can you make sure these get watered?

Hey #Vancouver ! Come join us down on the waterfront by 555 West Cordova. Meet your local egg farmers and walk away with a breakfast sandwich and some lovely daffodils! Let’s #wakeuptoyellow

the grey was bathed in yellow, and it grew. ?? it’s not every day you’re given a free daffodil plant, breakfast sandwich, and smiles by Ontario egg farmers. I’ll take it. #wakeuptoyellow

The above photo showed my personal experience bright and early here in Toronto -alongside some of my favourite moments following the event when Canadians expressed their gratitude – but there is also a great video that our friends at Egg Farmers of Canada recently shared with us.

Take a look at it below to see how we helped to make the day of countless Canadians in early February by gathering in metropolitan areas, as mentioned, to hand out egg sandwiches and daffodils to brighten up the day of commuters on their way to work. It was SO much fun to see it first hand and hope that you had the opportunity to experience it for yourself!

So… because we love eggs so much at DoTheDaniel.com, we have a second contest for you to win by sharing your favourite way to #WakeUpToYellow! Follow these few simple steps for your chance to win a stand mixer valued at over $500!

2. Using the link below, simply click to tweet your entry with a photo and small description of your favourite egg recipe that you love to start your day with. Share with us all your favourite way to enjoy eggs in the morning and your favourite recipes. Every tweet counts as entry, so the more you share – the better your chances!

Yes, it’s just that easy! I’ll be on the lookout for your photos and will be RTing some of my favourites from across the country throughout the contest period (full contest rules and regulations can be found below and contest will run until Friday March 11, 2016). I can’t wait to see who wins this $500 prize!

Wake Up to Yellow Official Rules:

The Administrator’s time clock is the official clock for this contest.

Entries must not contain brand names, trade names, trademarks or any other third party identifying marks, other than those owned by the Sponsor, which Entrant has a limited license to use to incorporate in his/her entry in this contest;

Entries must not contain images or artwork not created by entrant;

Entries must not refer to third parties without their express permission;

Entries must not contain material that is inappropriate, indecent, obscene, hateful, tortuous, defamatory, slanderous or libelous, or in the sole discretion of the Sponsor not in good taste;

Entries must not contain material that promotes bigotry, racism, hatred or harm against any group or individual or promotes discrimination based on race, gender, religion, nationality, disability, sexual orientation or age; and the Submission must not contain material that is unlawful, in violation of or contrary to the laws or regulations in any province where Submission is created.

Previous post:
Food & Wine | A How To Guide on food pairings with Estrella Damm Next Post:
Health & Nutrition| It’s time to have The Talk about heart health