When it comes to all things Disney, it can be said that you’re never too old. I remember watching Lion King and Little Mermaid on repeat as a child, and I have definitely sat with Lyric while he watched them for the first time. Now here is the perfect opportunity to feel young and amaze the lil ones in your life. Disney on Ice announced it’s newest show, 100 Years of Magic!

With a cast of over 50 members, and a show including over 30 unforgettable songs, it will be a night of memories that will last a lifetime. Sing along to songs from Frozen, Toy Story, Finding Nemo, Aladdin and more! I can’t figure out which I’m more excited for, watching Lyric’s face or singing along to my childhood favourites?! We had an absolute blast at last year’s Worlds of Fantasy show! 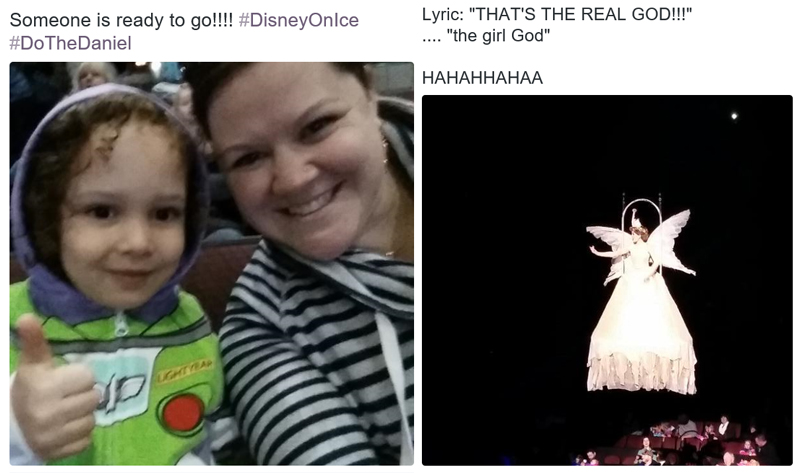 Lyric was so excited when I told him about this years show and all of the characters involved! It’s definitely become a tradition for us, and I always look forward to seeing how they’re able to translate film onto ice. Just amazing.

How amazing does the show look?! With shows all across the country, you don’t want to miss your chance to see it! Click here to see a list of show dates and times. Now, how would you like an opportunity to go to opening night here in Ottawa at the Canadian Tire Centre?! Here’s your chance to win a 4 pack of tickets! Simply follow the instructions below: I want to celebrate 100 Years of Magic with @DisneyonIce thanks to @amandahayden and @dothedaniel! #DisneyonIce http://bit.ly/1nJ7yXQ

*Contest closes Wednesday February 10, 2016 12:00am
** ONE tweet per twitter account will count as entry. Winner must be following all twitter accounts as listed in Entry Option #1 to be deemed valid. Contest odds depend on how many valid entries are received. Contest will run until Wednesday, February 10th 2016 at 12:00am EST. ONE winner will be chosen at random and announced via @AmandaHayden’s Twitter Facebook Page on Wednesday, February 10th 2016 at 12:00am EST. Prize cannot be redeemed for cash value. Contest winner will be contacted via Twitter (or alternate social media) and subsequently emailed instructions on how to have prizes sent to them. Contest open to Canadian residents only. Prize must be redeemed in Ottawa, Ontario and does not include transportation or accommodations. *

Tickets for Disney On Ice Celebrates 100 Years of Magic can be purchased by visiting www.CapitalTickets.ca, by phone at 613-599-FANS (3267) or 1-877-788-FANS (3267); in person at each of the 10 participating Canadian Tire stores in Ottawa as well as the store in Perth, The Sens Store at Carlingwood Mall and Place d’Orléans, any Ottawa Sports Experts location, Les Galeries de Hull, Ottawa Festivals and at the Canadian Tire Centre box office. Tickets are $72 (rinkside seats), $52, $32, $23 and $15 for all shows. Prices include all taxes but exclude CRF and convenience charges. For group ticket information, please call 613-599-0210 or e-mail [email protected]

Previous post:
Events | Come along with us on the #InsiderCollective with W Montréal Next Post:
Travel & Lifestyle | Come see how we #CaptureLeMoment as LE CHÂTEAU #LoveBirds