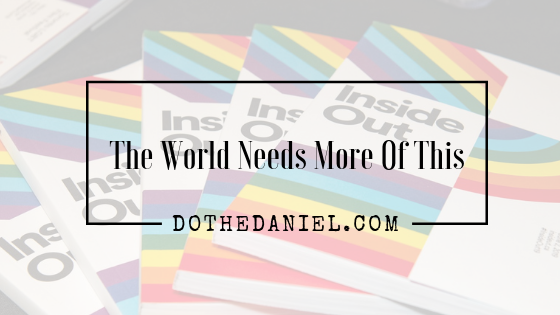 There’s Still A Lot to Do

It was earlier this year as I began another campaign with the blog for a brand that we had worked with a few times over the year. At the time, I hadn’t decided to put down the proverbial torch I had been carrying on my own for the blog to begin looking for a new career. It was still my all, my everything, and for the most part the only thing that was keeping me afloat. Faced with finding a way to showcase happiness, I made myself presentable, set up the product in my kitchen and shot the campaign photos and video.

I was happy with the results and thought I even looked good in the photos (something I don’t often say about myself while I work on being a healthier version of myself physically, emotionally, and mentally). When the campaign went live, I could never have imagined the amount of hateful and abusive comments I would get online about being a gay man. The campaign went viral, but in the wrong way. The sad part is that it’s not the first time strangers have wished me dead, told me I was evil, and chastised me on the internet just for being myself and doing what I love. Although it is 2019, the fact remains that there’s still a LOT to do.

I’m not trying to be all doom and gloom. Trust me, in light of some political turmoil in the world, this could sound pretty “first world problems” of me. But over the course of my life, I have in fact faced some pretty challenging moments as a gay man. I didn’t come out of the closet until I was twenty-two because I wasn’t comfortable with who I was until that time. I was gay bashed in Toronto in my early twenties which resulted in amnesia and hospitalization, not to mention a pretty nasty cast on my arm from defending myself. I’ve been the victim of abuse, sexual abuse and homophobia from strangers and loved ones alike. And I am still standing here, proud of who I am, and willing to share my story for those of you who cannot. But moreso for those of you who still ask in 2019 why things like Pride or Inside Out are important.

So let’s talk about a few films I am most excited about to see at #InsideOut19 – but first, to lighten the mood a bit, some photos of me that made me smile from moments in my life as a proud gay man that help me realize how beautiful the journey (good & bad) has been to get me here today.

At thirty five, married, and working towards a new career and a baby, my perspective of the world is going to be my own. Pride is something different for me with each iteration of myself above in those photos. This year it may mean something, and in a few more years something completely different. But the fundamentals of unity, acceptance and love are what I am most drawn to.

Inside Out is a film festival which celebrates and showcases innovative LGBTQ filmmakers from across the globe. In its 29th year, the festival has drawn international attention and in my opinion deserves so much more as it continues to grow and thrive.

The 2019 feature film program includes a total of 40 films, representing 32 countries. The lineup includes 5 world premieres, 6 international premieres and 14 Canadian premieres. “We have lift off for 11 days of meaningful queer stories in all forms from musical fantasies, vital documentaries, short form narratives and episodic work that represent the vast diversity in experience, access, and crisis across our LGBTQ2S communities,” said Andrew Murphy, Inside Out’s Director of Programming.

27 narrative and 13 documentary features will debut over the course of the 11 day festival. The feature program will be composed of Galas and Special Presentations (6 films), Premieres (10 films), Icons (6 films), Spotlight on Canada (4 films) and International Showcase (16 films). The festival will also screen 94 Shorts from a wide variety of exciting LGBTQ filmmakers.

While Julio & I are excited to attend screenings of both Papi Chulo and Camp Chaos, there are so many incredible films in the 2019 lineup that I encourage you to come see for yourself. By attending, sharing, and supporting Inside Out you can actively help to share a message of inclusion, change and understanding that the world desperately needs right now. Click here for the full schedule.

Join in on the social media conversation with us by following @InsideOutFestival on Instagram, @InsideOutTO on Twitter and by ‘Liking’ their Facebook Page. Share your favourite screenings and moments using #InsideOut19 and make sure to say hi when you see Julio and I out and about enjoying the programming with you all!

Photos: Inside Out, Daniel Reyes & all Social Media accounts listed