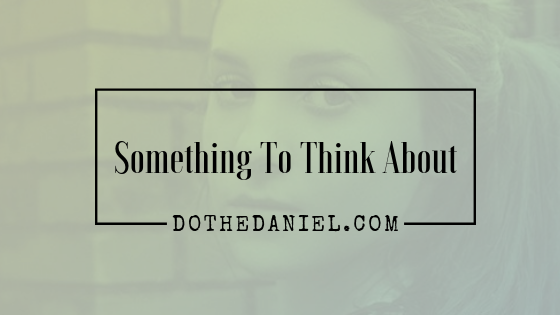 by Daniel Reyes Cocka • November 14, 2018 • Events, Travel & Lifestyle • Comments Off on An Important Day To Remember •

An Important Day To Remember

I remember years ago sitting down to do one of those DNA kits. After spitting into a tube and rubbing the inside of my cheek with a cotton swap I sat down to fill out the questionnaire. One of the questions struck me as strange because it asked me if I wanted to know if I was genetically predisposed to Alzheimer’s and other mental conditions. Being that I already knew that Schizophrenia and Alzheimer’s ran on my mother’s side, I gave it some thought and decided to say yes.

Weeks later when the results came in, I found out the results and though it was difficult to read, I did in fact possess the gene that could lead to both. Now it should be noted that this does not mean I will suffer from either, but it gave me a lot to think about. So when I found out that #GivingTuesday 2018 allows me the opportunity to support The Schizophrenia Society of Ontario, I know it was something I should share with you all.

So why this cause and why now? The world is full of bad news these days. And the fact remains that Schizophrenia affects 1 in 100 people – that’s more than 140,000 people living in Ontario today. All of them neighbours, friends, colleagues, family members. On #GivingTuesday you have the power to change the lives of those people, and chances are you’re going to know one of them in your lifetime. I don’t want to scare you with these facts, but rather I am hoping to inspire you to help support the world of The Schizophrenia Society of Ontario. 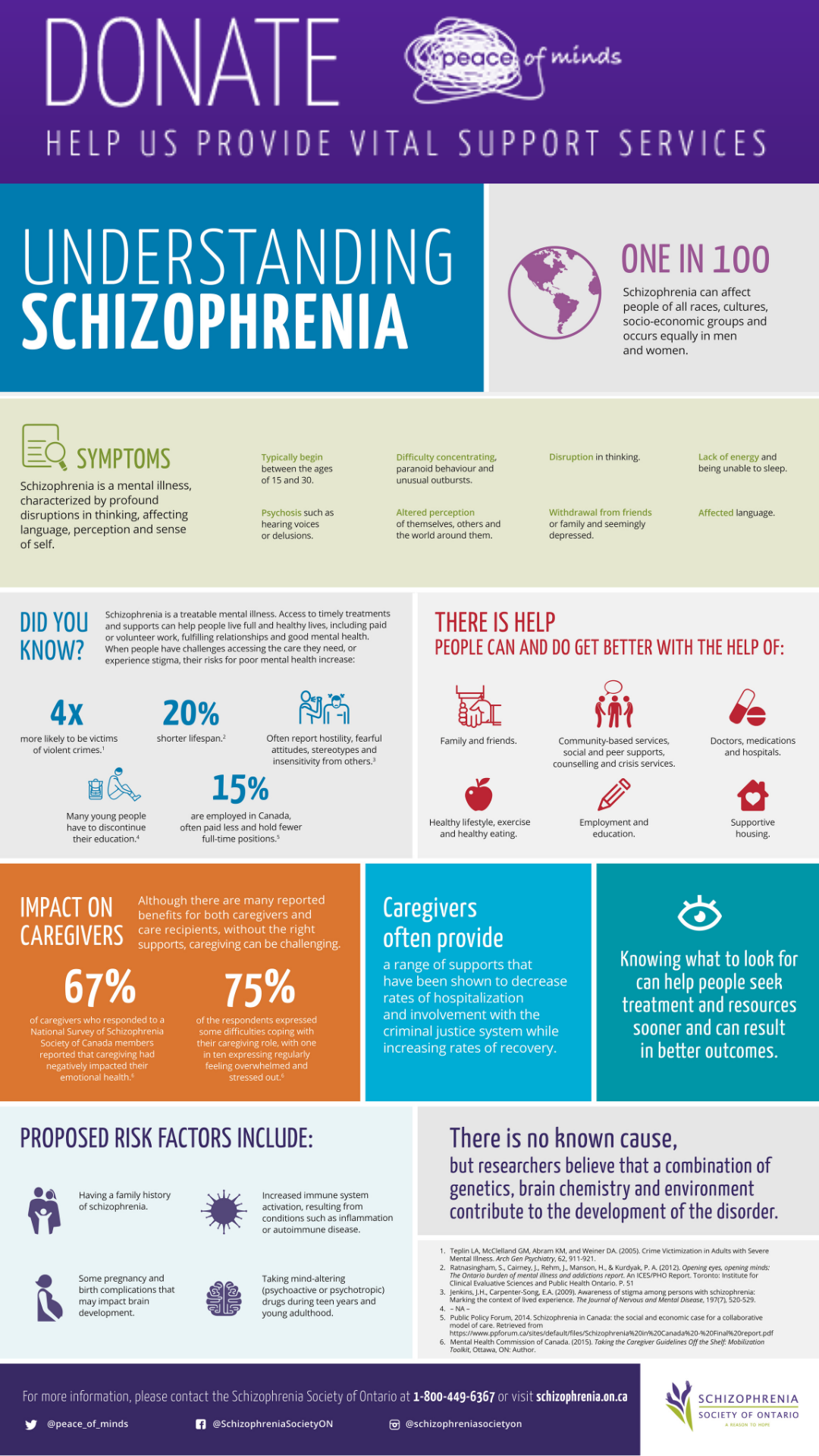 Talking about mental health and mental illness is something that we have tried to do a LOT more this year. Not only because it has affected my life and family, but because all too often I think the word “crazy” is thrown around callously when we feel someone is acting in a way we might not agree with. But mental illness is no laughing matter and that is why I am taking the time to talk about this. And why I hope you help me spread this important message.

Here is how your donation can help to change the live of a Canadian both on #GivingTuesday and all year round. 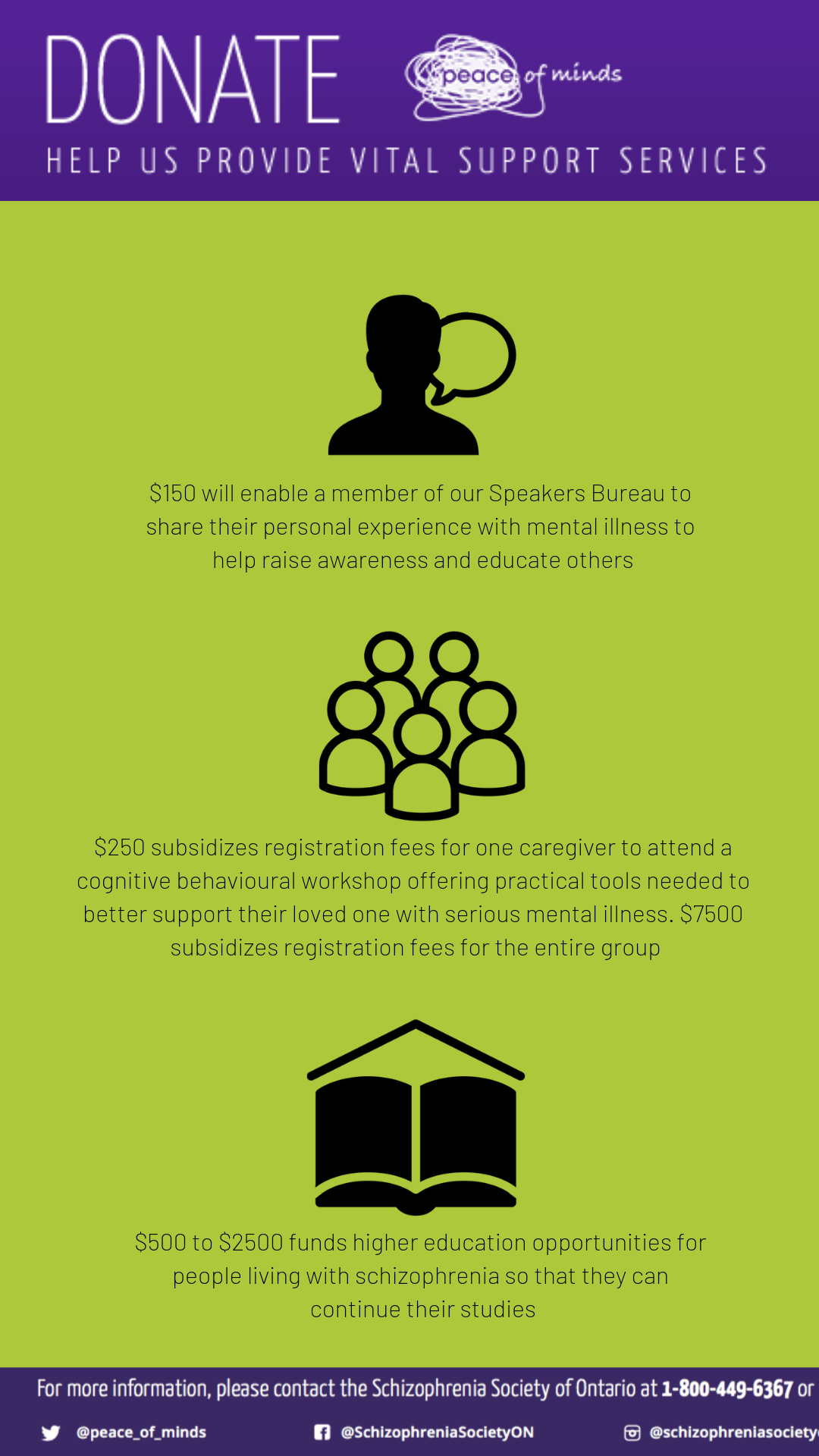 The fact remains that the impact of schizophrenia in our communities is significant – one in 100 people in our community will be diagnosed with schizophrenia and 3 in 100 with psychosis. On a provincial scale, this means it directly affects over 140,000 people and their families, friends and loved ones, and many more in their networks

“The Schizophrenia Society of Ontario is Ontario’s largest not-for-profit charitable health organization supporting individuals, families, caregivers and communities impacted by schizophrenia and psychosis province-wide for 39 years. They’re also one of very few organizations that provide Schizophrenia- and psychosis-specific supports, filling a critical service gap when individuals and families often have nowhere else to turn. ”

I hope that today and over the coming weeks, you take a few minutes to check out more facts about The Schizophrenia Society of Ontario and the work they do across the province. Taking the time to share their message is important to me because chances are I will know someone who will benefits from their diligence to providing the best care in the best way possible.

This Tuesday, November 27th is National Giving Day in Canada (the first of its kind, modelled after the US Giving Day) marking a special day for Canadians to give back following Thanksgiving, and ahead of the holidays, a time many charities are in dire needs of funds.

This is where I ask you to not only donate to their amazing cause, but also to join in on the much needed social media conversation by following @peace_of_minds on Twitter, @SchizophreniaSocietyON on Instagram and by ‘Liking’ their Facebook Page. Follow and use #GivingTuesday as you help us raise support, awareness and much needed funds for the amazing work they do all year long.

Previous post:
Your Endocannabinoid System May Be Out Of Balance Next Post:
The Reason I Stopped Complaining On The Internet