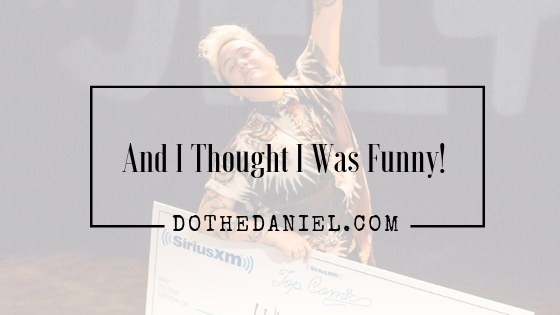 This Is No Laughing Matter

Life isn’t always beautiful selfies and great food. It’s something really hard and can get you down. It’s why I try to find ways to laugh and unwind wherever and whenever I can amid the responsibilities of running the blog, being a husband, and working towards having children.

Julio & I have been invited to attend SiriusXM’s Top Comic Competition in Toronto as the competition celebrates its tenth year, and I cannot wait to kick back and laugh the night away. Come check out what the competition is all about the main reason why comedy is so important to me!

Pictured above is 2018 Top Comic winner, Chanty Marostica. This photo was taken at the SiriusXM Top Comic Finale during JFL42 on September 27. The competition continues its 2019 tour looking for the funniest person in Canada and I can’t wait to laugh my ass off with Julio right here in the city.

As mentioned, 2019 is a milestone year for the competition as Top Comic celebrates a decade of hilarity featuring the best stand-up comics from coast-to-coast. To mark the 10th anniversary, SiriusXM is opening up the competition to past winners for the first time, giving them the chance to win for a second time, and raising the bar.

Since its inception, the competition has grown exponentially from a $2,000 prize to the biggest comedy prize in Canada. The winner will take home $25,000 cash and receive global exposure with a guaranteed spot to perform at JFL Sydney in Australia, in addition to spots at JFL42 (Toronto), JFL NorthWest (Vancouver), Just For Laughs Montreal and inclusion in a JFL TV taping airing on a Bell property network.

My appreciation of stand up comedy comes from my parents – who often would head to Montreal for Just For Laughs performances when I was growing up. My Dad used to ALWAYS tell the same jokes when company was over from some of his favourites, which would usually lead to belly busting laughter around the table. Those are some of my best memories of him now that I think about it.

Live auditions in search of Canada’s next Top Comic will be held over three nights in Toronto. Each evening, 10 different comics will perform their best material in front of an audience and a panel of industry judges with hopes of snagging a spot in the semi-finals and a chance at Canada’s biggest comedy prize. Hosted by Canadian comedian and SiriusXM personality Ben Miner, the auditions will be recorded for broadcast on SiriusXM.

Previous post:
A How To Guide To Feeling Beautiful This Summer Next Post:
How To Make A Perfect Wine In 5 Steps