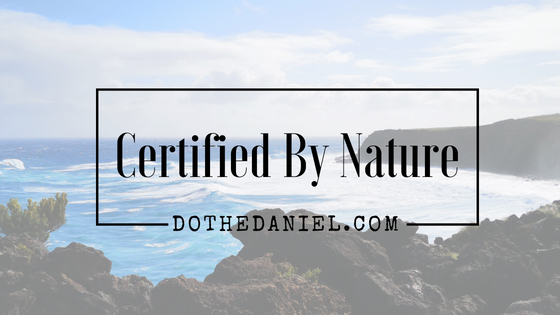 by Catherine Sugrue • June 19, 2018 • Travel & Lifestyle • Comments Off on Add This Place To Your Bucket List, Immediately •

Travel is one of the most important things in my life. Growing up, I was quite close with my grandmother, who had a serious and incurable case of wanderlust. She took each one of us in the family on trips all over the world, as much as she could. Watching her get excited while packing, her calm sense of purpose while on the way to the airport and then the light in her eyes as we boarded the plane, was all part of the adventure. When she wasn’t travelling, she would see a plane fly overhead, look up, wave and say, “goodbye you lucky people!”

This sense of wonder combined with the desire to explore new places, while learning infinitely more about myself, is something that rubbed off on me completely. I’ve caught the bug and there’s no going back from here – not that I would ever want to anyways. Over the years, I’ve added a few locations to my proverbial bucket list. But, every now and then, a new destination creeps up on me that I would never have even thought about visiting. One that should have been on my travel list all along. Recently, this destination was The Azores. 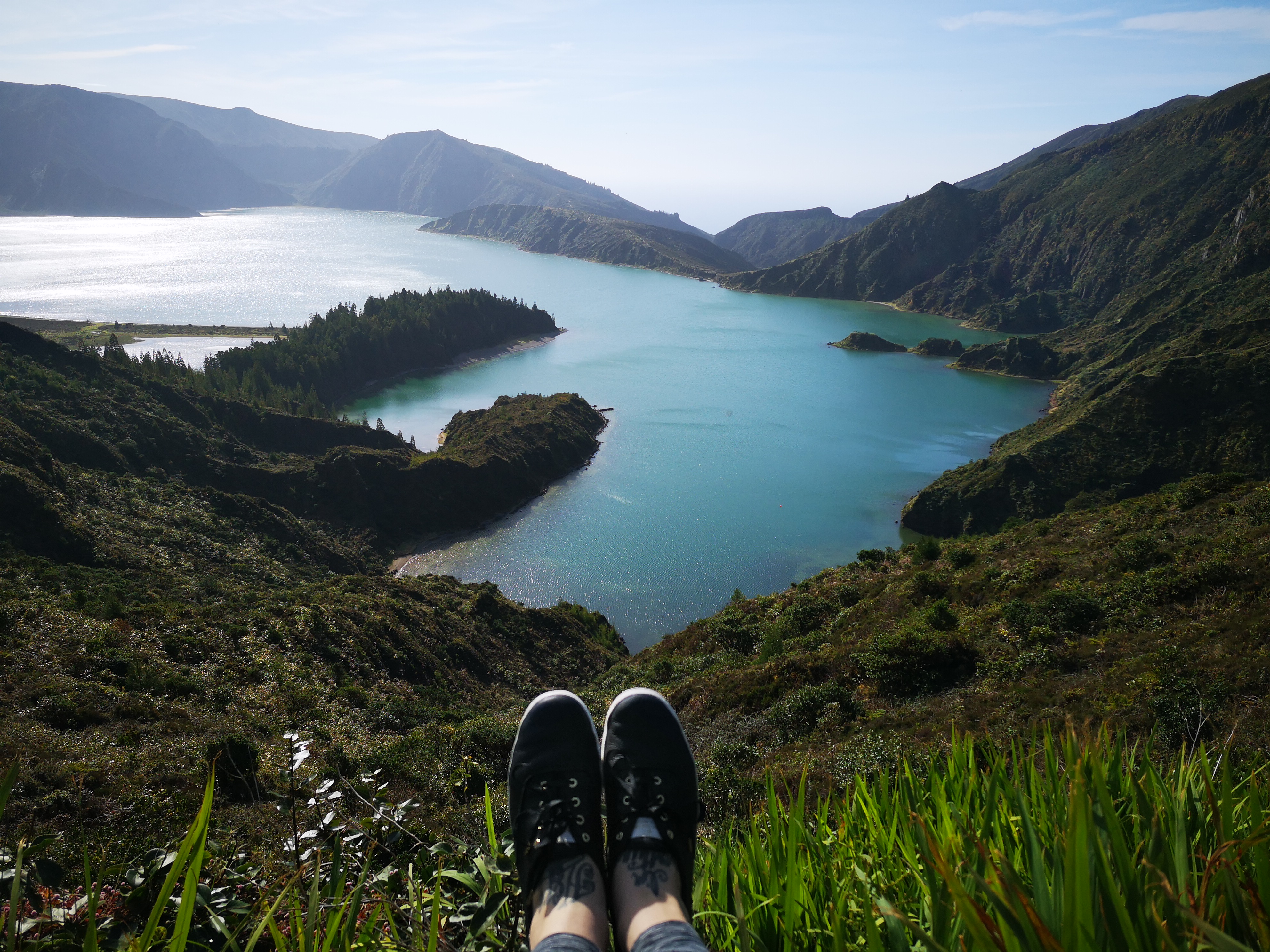 An autonomous region of Portugal, The Azores is comprised of an archipelago of nine volcanic islands in the North Atlantic Ocean. By hopping on a direct flight from Toronto with Azores Airlines, you can get to the main island of São Miguel in just under 6 hours. From there, it’s easy to hop on over to the other islands with just another short flight. Or, you can hang out on São Miguel where, I discovered, that there’s already a whole heck of a lot to do!

Upon arrival to this unique group of islands, we were quickly whisked away to the island of Terceira. Led by our super knowledgeable and excited guide, Sophie from ComunicAir, we learned all about how there are actually more cows than there are people in The Azores. There isn’t really a need for barns as the cows just roam free on the lush farm lands, so the farmers bring machines to the paddocks, directly to the cows in order to milk them. Dairy, beef and fish are actually their largest exports in The Azores – and with good reason. The butter is likely the best I’ve ever had. I’m not proud, but I definitely ate spoonfuls of it… without the bread. Don’t judge me until you’ve tried it for yourself. Sophie took us all over the island, where we soaked in as much as we could about the history, the food, the people, the foliage and the wine. We learned all about how vineyards are actually quite different in The Azores. The vines are grown directly on the ground and protected by rock walls, in order to preserve the heat. Other highlights of the island included the Serra do Cume Lookout and Angra do Heroismo – which is the only city of the archipelago that has been classified as a World Heritage Site by UNESCO. With a quick stop for lunch in Biscoitos, we were able to enjoy the famous dish of The Azores – called Alcatra. It’s a rich beef stew complimented with a variety of different spices and slow cooked in a clay pot for hours. Served with rice or potatoes (or both), this meal goes down in the books as one of my top travel meals ever. I was told that everyone has their own recipe (not normally one that people like to share either) and that the spices have a story of their own.

With the spice trade being prominent in the 15th century, sailors would use this group of islands in the middle of the Atlantic as a rest spot to recover, re-group and ultimately enjoy themselves. It is said that, since spices were not meant to leave the ship, sailors would smuggle small amounts onto shore. They would then use them as currency to gamble with locals or as payment for goods and services. And thus began the integration of quite unique and exotic spices into these islands – and into one of my new favourite dishes. Our next stop was to one of only three intact hollowed out volcanos in the world, Algar do Carvão. This magical experience is a must-see when visiting The Azores. Like nothing I’ve ever experienced before, it’s an incredible feeling to soak in all of the power and energy that the earth provides, straight from the source. With clear markings on the walls of where the lava flowed and forged its way through the mouth of the volcano, only vegetation, a lagoon and even stalagmites remain. After that amazing adventure, we headed back to Terceira Mar Hotel for the night, a hotel which boasts views and comfort for days. The next day, we took in more sights with our amazing guide Nuno from Aguiatur, including Praia da Vitória, which is a historic waterfront city filled with beautifully adorned buildings from the 16th century. 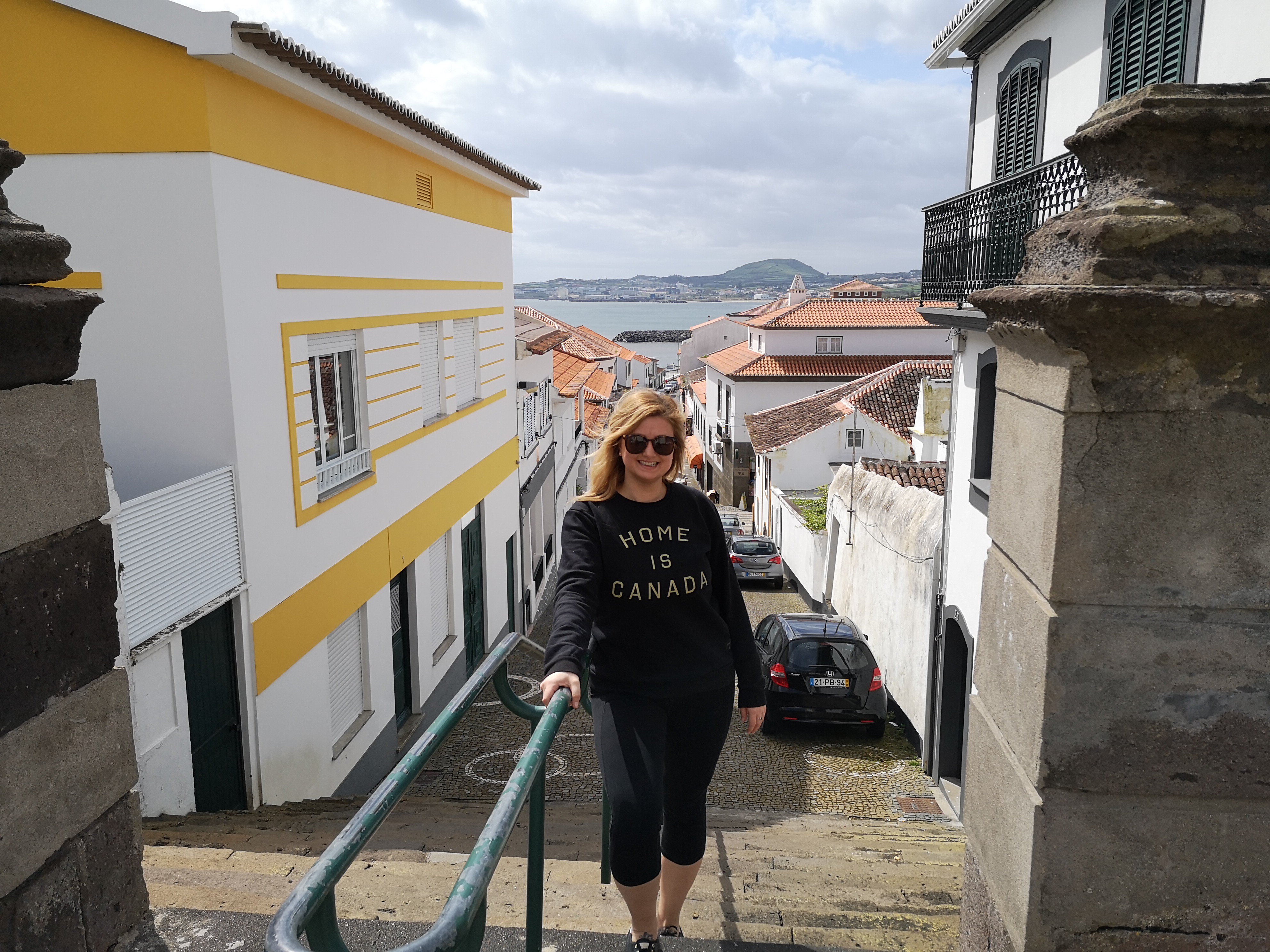 Although our time in Terceira was a short one, it was well worth it. Our next destination was a quick flight back over to São Miguel, which is the biggest island of the archipelago. When we arrived, we spent the afternoon walking around the main city of Ponta Delgada, before heading to our beautiful hotel, The Azor Hotel. That evening, we paid a visit to one of the best steak houses in the city, Alcides – which I’m told is a bit of a hidden gem. And, as you are now well aware from my note above… the beef from The Azores is some of the best I’ve ever had. So that’s a must, if you’re a sustainable meat-eater like myself! Or if you’re more into fish, you’re in for a treat as well as it’s caught fresh daily. The next morning, we were up bright and early for a full day of exploring the island. After taking in the stunning scenery at different lookout points, our tour guide (and the love of my life, as the girls are now full aware), Ricardo from Azores Adventures, took us on one of the most adventurous activities on the islands – canyoning. Although I’ve done it before, this experience was much different and a lot more extreme, but also a lot more fun! If you’re into outdoor adventures, I would highly recommend getting into canyoning in The Azores.

We climbed rocks, belayed off of waterfalls, slid down rock waterslides into natural pools and jumped off of cliffs. I learned a lot about pushing limits, challenging yourself and changing your perspective, which can ultimately be relayed into every day life. It was epic. We clearly had worked pretty hard that day and deserved a big meal to compensate for all of the energy spent. One of the most fitting meals, in my opinion, is also another one of their traditional fares. Since the region of Furnas is all volcanic with hot springs and pools, they use it as another method of cooking called the Cozido das Furnas.

Cooked in a giant pot, covered and then buried under the earth to cook with the heat from the hot springs, a variety of meats and root vegetables are layered strategically for flavour, and then are left for hours, so that the natural flavours marry together into one delicious naturally-cooked meal. Exploring Furnas is a must when visiting the island of São Miguel. The natural hot pools were divine, as well as the natural springs that you can actually drink (but you should only drink the ones that are deemed safe – FYI). After more exploring around the beautiful parks, we headed over to the Furnas Boutique Hotel for some drinks and nibbles.

This hotel is amazing, with their own naturally-fed hot pools on site and a beautiful restaurant with my new favourite wine – Ervideira Invisível Aragonez (a Portuguese clear-coloured wine made from red grapes). After a tasty meal with a wonderful group of people, we headed back to Ponta Delgada to our hotel, hearts and tummies full from all of the adventures and great food. With only one day left in The Azores before we made our way over to Madeira, we spent it exploring even more of the natural beauty of the island, including checking out the varied geography of the volcanic regions, craters now turned into lakes and lookout points to some of the most breathtaking scenery I’ve ever had the privilege of seeing. If you’re into untouched, beautiful landscapes – you will love The Azores.

We also got to check out the Santa Barbara Eco-Beach Resort for some lunch, so that we could learn first hand all about the wonderful initiatives that the local businesses are doing to reduce the environmental impact on this rugged and untouched natural region. 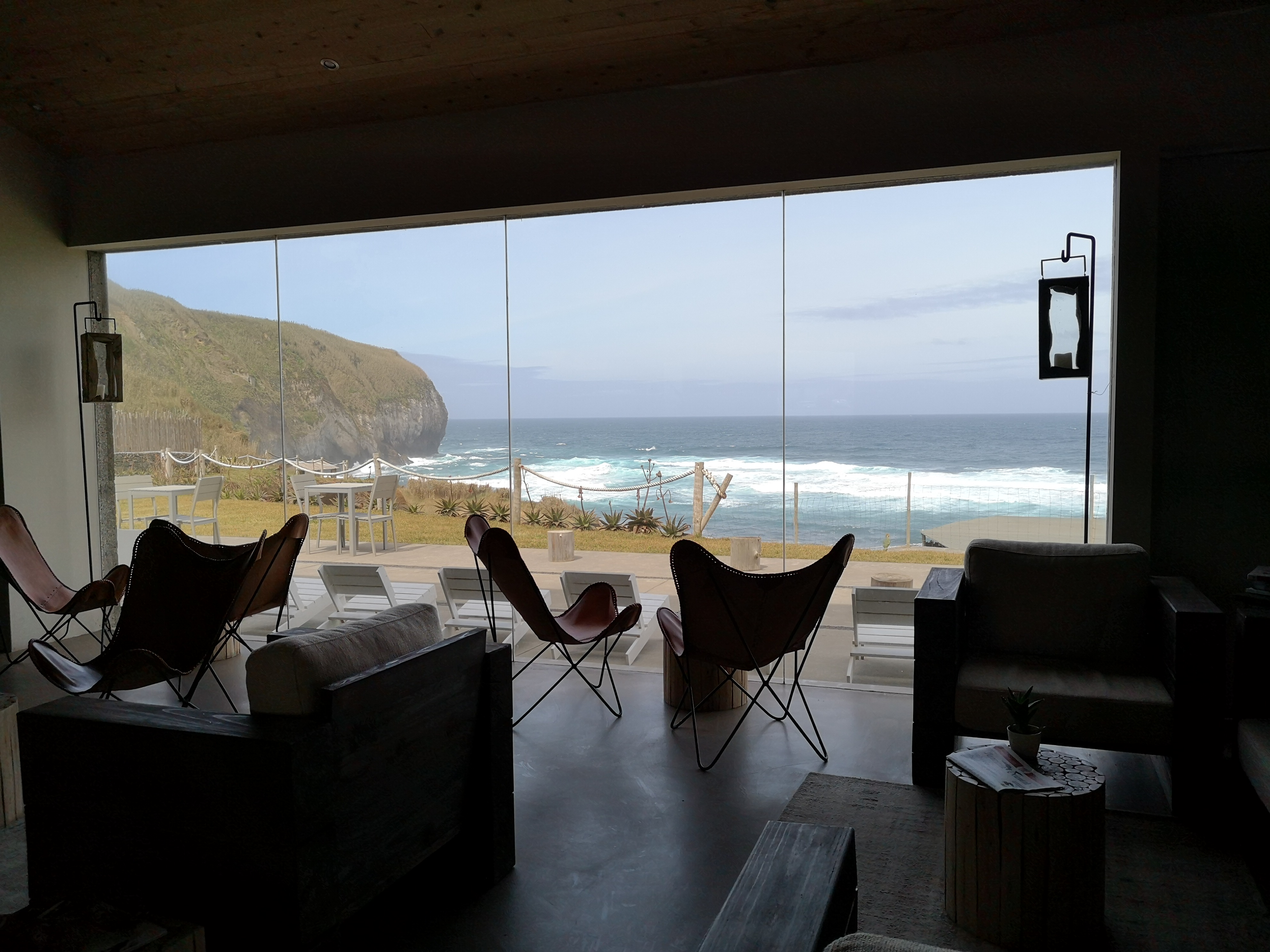 Another highlight of the trip was paying a visit to the tea plantation. For those who know me, they’ll be able to truly grasp how amazing this experience was for me – tea and chocolate are my jam. The Azores are actually known for their unique, yet traditional teas. There are also lots of other hot pools and secret spots to check out, that are located all over the island. Things that I have yet to explore, but can’t wait to check out for myself one day! All in all, the food is incredible, the scenery is stunning, and the adventures are a plenty – but above all else, the people are the true highlight of this beautiful part of the world. I know it may sound like a pretty heavy statement considering I’ve travelled all over the world so far, but this trip to The Azores was life-changing for me. This magical place stole a piece of my heart and I can’t wait to go back one day. Azorean butter, you better watch out… cause I’m a comin’ for ya again.