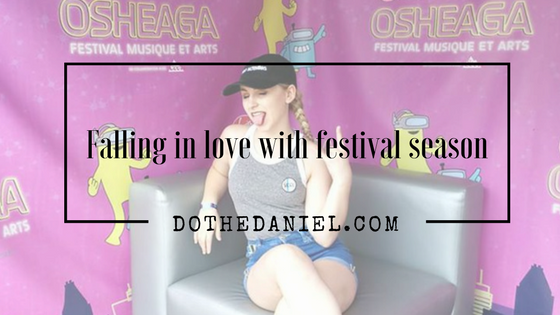 Hello friends! I just had the most spectacular Summer trip ever to Montreal, specifically Osheaga (the best music festival to be at this Summer). Between location, lineup, and vibes, this was the place to be and I wanted to share with you the seven reasons why! 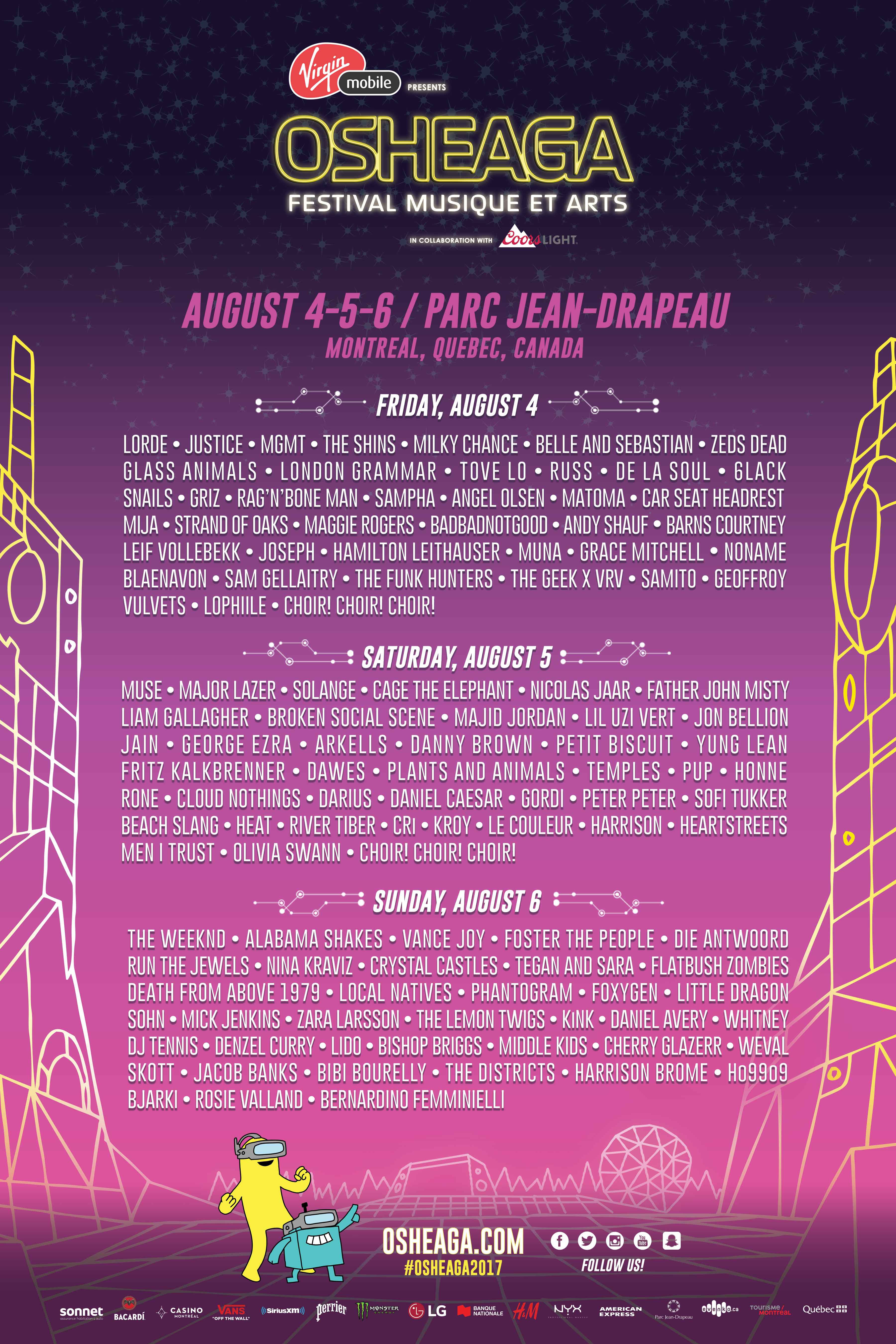 My boyfriend Cole and I drove up from Toronto late Thursday evening, to arrive at Le Centre Sheraton around 3:00am on Friday morning (I loved the hotel so much that I’m sharing another blog post about it with you all soon!). Were we totally exhausted when we got there? Yes. BUT thanks to Le Centre Sheraton, we were able to crash peacefully in the comfiest bed ever, to wake up feeling rested, overlooking the beautiful Montreal skyline ready to seize the day. 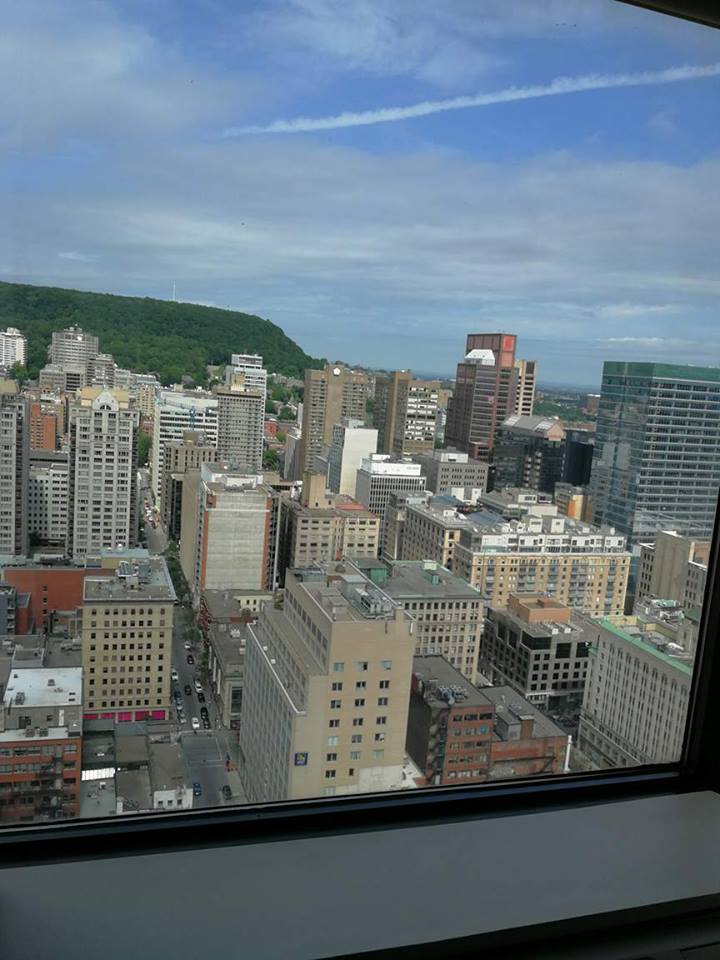 @gemmamastroianni_ is loving her time at the @SheratonMontreal being pampered before heading out for the day to Osheaga. Be sure to follow along! #Osheaga2017 #MTLMoments #SheratonMontreal #TravelWithMarriottCanada – – — — #mytravelgram #travelgram #igtravel #Blogger #TravelBlogger #PostThePeople #InstaDaily #InstaMood

The entire weekend was so incredible- I could truly  go on forever but to sum it up for you guys, here were some of the BEST reasons as to why Osheaga was truly the party to be at (in no specific order)

Day 1 : Show goes on with BadBadNotGood , despite ugly rain

I woke up on day 1 with some decent weather, but knowing that rain was a possibility. Despite my boyfriend and I’s optimism, it rained- by that I mean it poured. Just as I was arriving, it literally came down so hard. I was expecting everyone to be super grumpy and depressed, but surprisingly, everyone still had some pretty great vibes-I mean it’s Osheaga. How could you not?! Most of us had been waiting the whole summer for this.

Though postponed for about a good hour or so, once it started clearing up Cole and I decided to leave the VIP terrace and go for a little stroll to check out the festival area and see what was up. When we heard music playing in the distance, we instinctively followed. It ended up that BadBadNotGood had actually began their set which made us so incredibly happy. We thought we totally missed them because of the rain, but we didn’t! These guys are truly such a treat as they are a younger-modernized-jazz band (from Toronto too!). It was a little gloomy but they kept things going with some classics such as “Confessions Pt.2”, “Kaleidoscope”, and more. Things were going great, until it rained again. This forced the band to cover up a majority of their equipment, but they did what they could to keep the set going. The most magical moment was probably during a wicked drum solo when it was pouring, then all of a sudden sun shine just cleared the skies- and the guys totally hyped it up with the tunes, and everyone danced together with so much happiness. I’ve seen BBNG about 3 times now and this was by far the most remarkable. 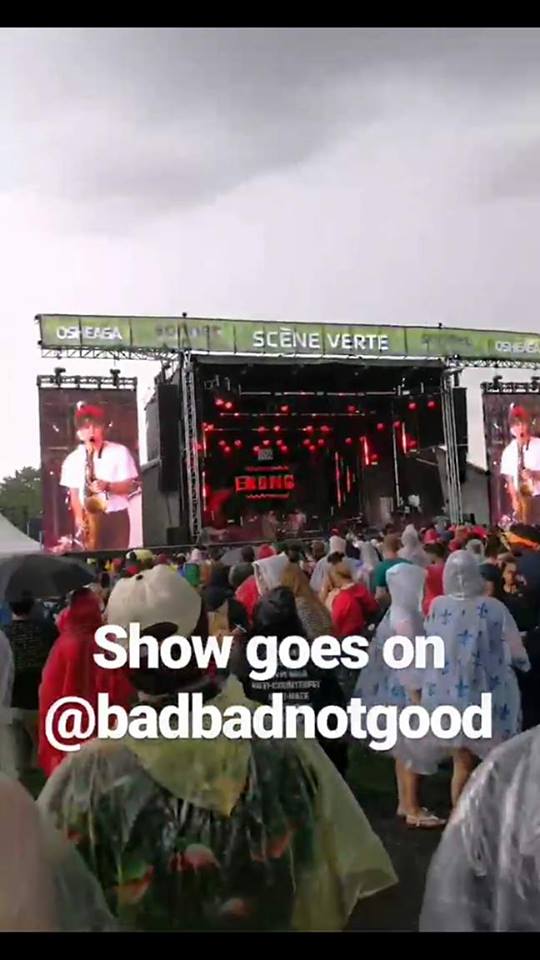 Lorde’s performance was purely magical. My goodness, she is so humble in person. Unfortunately it was raining through a majority of the set, but it honestly added to the vibes. It seemed as though most of the crowd was unaffected by the rain, and I think a part of it was how Lorde acted in the circumstances. At one point she was even sitting on the edge of the stage overlooking the crowd in the pouring rain, without a care in the world of how drenched she was getting- and I think that says a lot (it’s also pretty rock and roll if you ask me). In addition to this, she sounded even better than she does on the track, and had such a strong, powerful, and beautiful stage presence. Thank you Lorde for closing out Day 1 ever so perfectly! 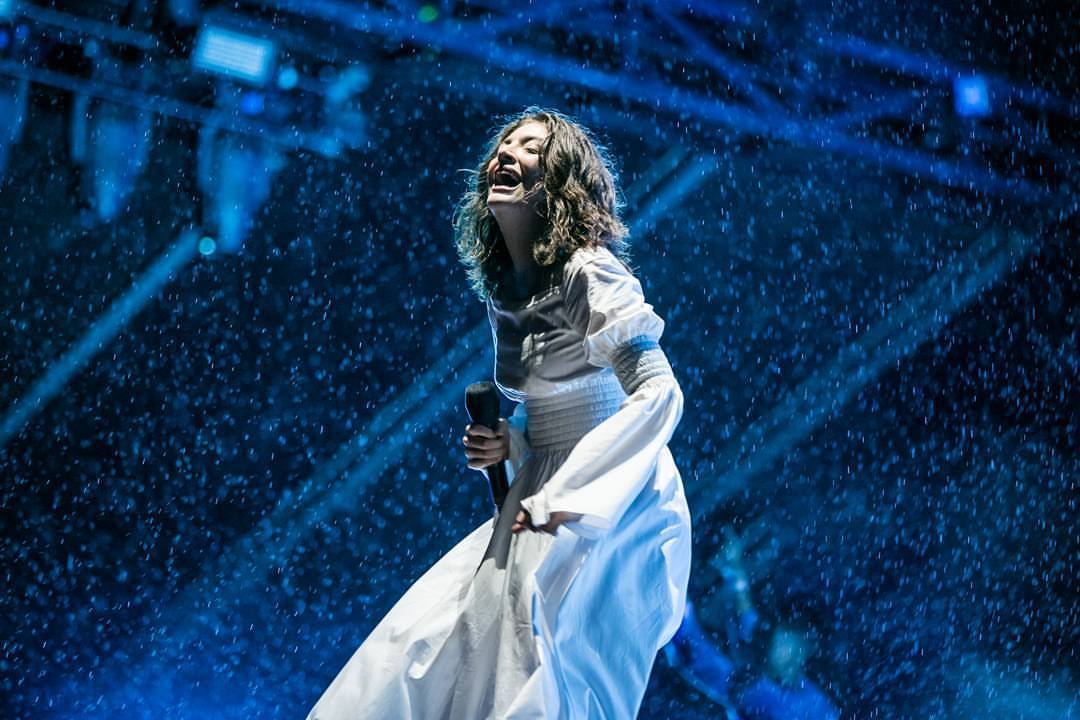 The Amount of Modern Classics

I knew the weekend to be musically blissful because of the stacked lineup with modern day classic bands/artists, but I didn’t truly understand how great it would be until I experienced it for myself. One reason being the fact that yes- there was a great line-up of bands that have been around for a long time. Sometimes these bands will take a focus on their newer material and skip over the classics that made took them to stardom – this was not the case. Secondly, it was so unifying in the crowd to hear songs that everyone knew creating such a sense of community. Artists such as The Shins, MGMT, Foster the People, Father John Misty, Vance Joy, Liam Gallagher, and so much more. There was a tangible sense of familiarity and community that made the weekend so incredible.

Getting Sweet with Haagen Daaz

To be honest, there wasn’t a whole lot of options in terms of indulging on all the sweet things. There was tons of choice’s for poutine and burgers but, not so much in the sweets department. Thanks to Haagen Daaz I got my sweet tooth on just about every day, and the almond bar was my fave!

I’d say Temples and MGMT stole the prize for the best Psychedelic Vibes/Performances this weekend. On Day 1, MGMT gathered a very large crowd, as they were one of the most anticipated acts of the festival lineup. As mentioned in my preview article, they don’t come around Canada too often- so this was kind of a big deal. MGMT had an amazing set-list featuring literally all of their best songs like “Time to Pretend”, “The Youth”, “Alien Days”, and of course “Kids” (which went into an amazing extended outro that led to a great dance party) and “Electric Feel”. Additionally, they played one of their newest tracks “Little Dark age” which is yet to be released, but I had a an exclusive listen to it before the set and ended up being even more prepared to jam out!

In terms of Temples, I’ve been waiting to see them for awhile. They didn’t have the most eccentric stage presence, but did they have an amazing quality of sound and talent- sounding just like the record when performing live. They opened the set with their newer track ”Certainty” which started the party off just right, and kept it flowing the whole way through in the sunshine with lots of good vibes and tunes of course.

Lots of land to be free + Father John Misty

Although the venue first seemed overwhelmingly large, it couldn’t have made me feel more free. Life has been pretty stressful lately, and to be in such a large space with so many beautiful people who are all just relaxing and listening to music was perfect. Although the space was considerably large, it was the perfect size to accommodate to the abundant amount of people attendance (because Osh was the place to be this year!). Not only was there space to dance and run around, but tons of area to lay down a tapestry to chill out and take a break.

On day 2, my boyfriend and I were in the crowd for Father John Misty, but since were both pretty short sets, it was a little difficult to see even though we were close to the stage. We thought, lets just go sit down somewhere and enjoy the music. We walked out of the crowd only to find the perfect spot underneath a tree up on a hill to lay our tapestry down and sit. From there on, we actually had a perfect view, watching one of the most outstanding (and romantic) sets of the Osheaga weekend. 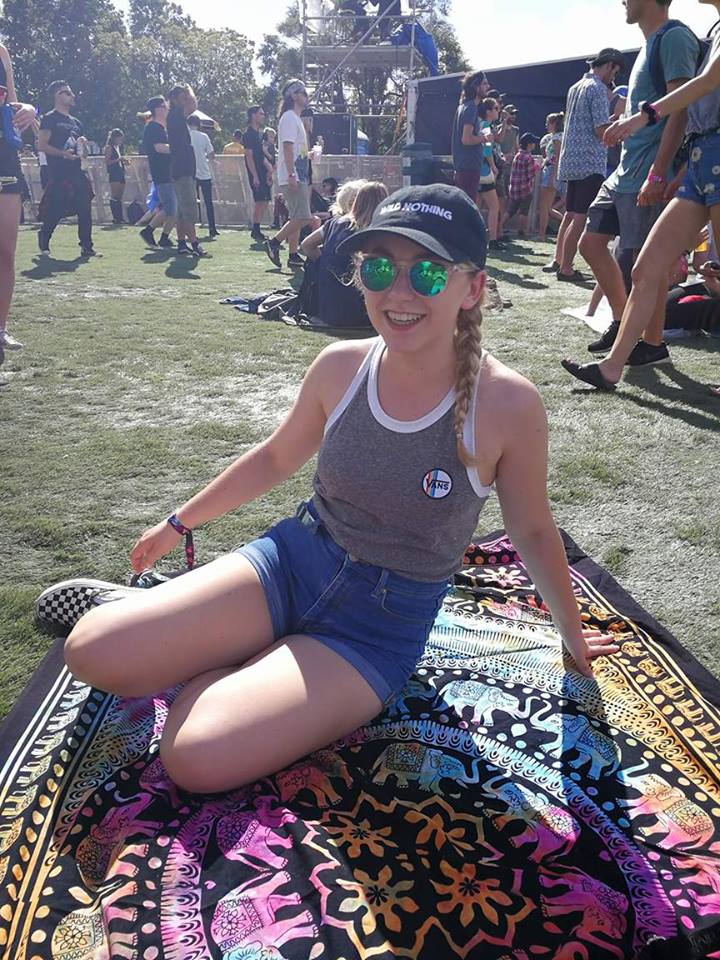 Death From Above 1979 over The Weeknd

So… this was a toughie. We were approaching the final moments of Osheaga- the end of day 3. All day I had been pondering on the decision on who to see- Death From above 1979 or The Weeknd. Both sets were at the same time, of course. Two Toronto based acts with an unbelievable amount of talent, who was I to choose?

I chose Death From Above 1979. My initial plan was to head to Dfa1979 and see their full set which went until 10:30, then catch the last 20 minutes of The Weeknd which went until 10:50pm. Unfortunately, The Weeknd actually ended 20 minutes early (10:30pm) so I didn’t even catch him in time. To be honest, I wouldn’t say I regret my decision. Death From above 1979 is a rock duo from Toronto and I couldn’t miss the chance to watch their set. From taking a listen to their music, you would think it was a full 4-5 piece band! I wanted to be able to see this live. I also figured that a large majority of the Osheaga crowd would be heading to The Weeknd because, well, it’s the Weeknd. This gave me an opportunity to catch Death From Above 1979 in a smaller more intimate crowd, as opposed to catching them at a big venue like Rebel with a large crowd. To top off this sort of late night intimate performance, the audio was perfect. I couldn’t have asked to end off this festival in a better way. 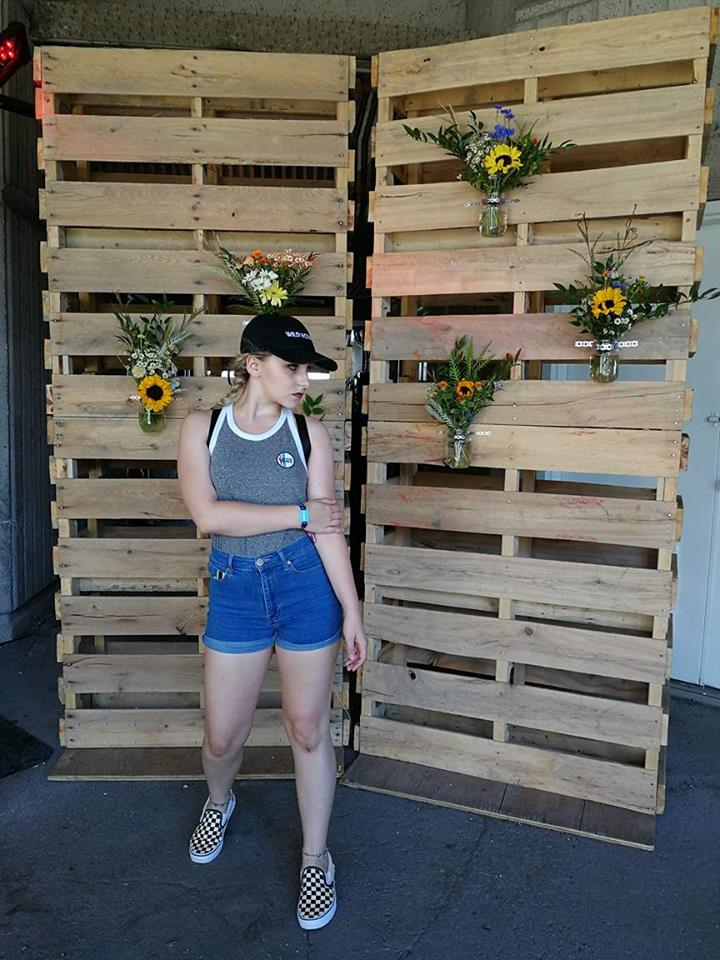 Like I said I could truly go on forever about how amazing Osheaga was. Between the beautiful city it took place in, the generous and loving crowd, the mood lifting and amazing music that we all got to experience all weekend long, and the realization that weather does not determine the power of a live performance, this was truly an outstanding weekend filled with many great friends and memories made. A big thank you goes out to Le Centre Sheraton for some of the best accommodations in all of Montreal, Huawei Mobile Canada for allowing me to capture this experience and share it on Do the Daniel Instagram stories in great quality with our viewers, and Osheaga for granting me VIP access to the festival to be able to share my wonderful experience with everyone reading.

Until next Summer, see you later festival season, its been real.

Mobile photos will be taken with my NEW Huawei P10