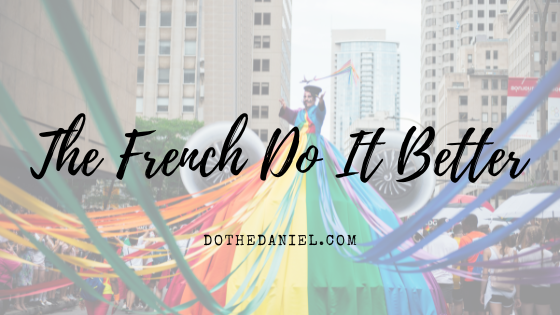 2022 has been the year in person events, and Pride festivities specifically, coming back after the pandemic lock downs. I indivertibly booked myself back to back to back Prides across the country, but as Julio would say, “I’m not mad about it.” As you saw earlier in June we partnered with Destination Toronto and Pride Toronto (click here) – and now it’s time to share that we’ve officially partnered with Festival Fierté Montréal Pride and Tourisme Montréal.

Yes that’s right, we’re off to Montréal and we are bringing you along with us!

I’m not proud to admit that I’ve never “properly” celebrated Fierté and I’m 39 years old – but thankfully this is the year that all of that changes. Not only am I going to proudly take part in as many events and festivities as I can, but I also get to do it with Julio at my side as an official #fierteMTL partner!

Of course Julio is over the moon because he has a thing for Québecers, so I guess it’s a win win all around in the most glittery gay way possible! 😎

“Founded in 2007 as an initiative of Montréal’s sexual & gender diversity communities, Montréal Pride Festival is now the largest gathering in this matter in the Francophone World. The organization’s primary mission is to support and promote local communities while serving as a beacon of hope for people around the world who continue to battle injustice. Today, Montréal Pride Festival attracts more than 3.4 millions local and international entries on seven days of community, cultural and festive activities including free shows, panels, the Community Day and the Parade.”

The excitement kicks off this year on Monday August 1st and runs until Sunday August 7th, culminating as most Prides do with a parade and a FABULOUS day of events and activations! Julio does have a day job here in Ottawa now but we will be making our way down Friday evening and staying all weekend long taking you to some of the best events in the city.

OMG WHAT AM I GOING TO WEAR?!

A Memorable Opening in-Person!
“We are thrilled to welcome festival-goers back to an iconic space where they can once again connect with one another,” said Chris Ngabonziza, Director of Programming for Pride Montréal.  “The opening show promises to be a memorable one as it will bring together the phenomenal Congolese-born Montréal DJ and songwriter Pierre Kwenders and the legendary Diane Dufresne, the first-ever Québec artist to fill the Olympic Stadium in 1984 with her unforgettable Magie Rose concert. The two headliners will perform on the main TD stage on the Esplanade of the Olympic Park on August 3, starting at 8 p.m.

With several incredible events taking place throughout the week – click here for up to date details on just one of the many taking place all week long – there is so much to get excited for! Brazilian singer-songwriter Pabllo Vittar is the most followed drag queen on social media worldwide with 35 million followers. Recognized as a “next generation leader” by TIME magazine, she will perform at the festival’s closing show on Sunday, August 7 at 8 p.m.

FeminiX, an evening, which celebrates sexually and gender diverse women, will feature, among others, Montréal-based queer and feminist rapper Calamine, whose solo album – Boulette Proof – earned her 2nd place in the Francouvertes Contest in 2021, one of the Révélation Radio-Canada nominations and the Prix Félix-Leclerc at the Francos de Montréal. Atikamekw-speaking singer-songwriter Laura Niquay, who recently released the album Waska Matisiwin (Circle of Life), will be presenting a sensitive and grandiose opus that better than ever lets her folk-grunge universe shine. Not mention the spectacular Arianne Moffatt. Click here for up to date details on this event which we will be at (so make sure to say hi!)

FeminiX will take place on Saturday, August 6 at 7 p.m.

Events at the Olympic Park Esplanade, in The Village and Downtown

In order to improve the festival experience and in response to the growing popularity of the Festival, the 2022 Montréal Pride performances and shows will take place on the site of the Olympic Park Esplanade. The Festival will also be happening in the Village, notably during the Community Days on August 5 and 6, on Sainte-Catherine Street East and in downtown Montréal, where the Pride Parade will start from on Sunday, August 7.

We will also be staying at a fabulous hotel downtown, eat at some of the best restaurants in the city, and will be bringing you BTS for some of the best Pride moments of the year back home for me.

Feeling the FOMO? There’s still lots of time for you to make arrangements to join us in Montreal and I encourage you to do just that. If you were looking for a sign, this is it hunny. It’s time to enjoy the magic that only Fierté can bring into our lives. Make sure to stop Julio & I in the street when you see us to snap a photo!

If all of this wasn’t enough gay energy and you’re looking for more details on Fierté, head to their website @ https://www.fiertemtl.com. Looking for even more summer inspiration in my home town? Check out this epic summer guide from Tourisme Montréal!

Of course come along and join in on the social media conversation by followingn @fiertemontreal & @Montreal on social media. Use and follow the #MTLmoments #fierteMTL #MTLpride #prideMTL #fierte hashtags to get each and every one of those magical moments online with us. With so many exciting things going on this year I know they are both accounts that will help make you smile and inspire your own adventures this summer, and all year long!

Previous post:
A New Lunch Favourite For The Busy Person on The Go
Next Post:
6 Back to School Must Haves The Kids Will Love