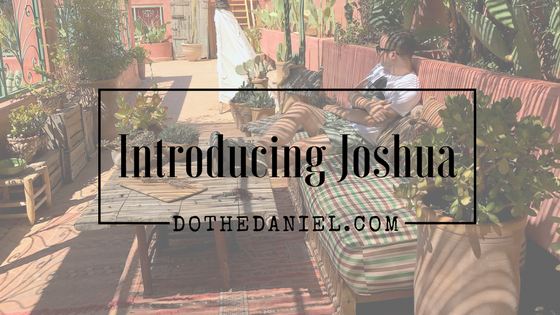 Hello from Vancouver where it rains 90% of the time and you need to sell your vital organs to afford to live here. Seriously. All jokes aside, I really love Vancouver and being out here on the West Coast. Other than the relentless rain, we have one of the most moderate climates in the world. In the words of Goldilocks, “It’s not too hot, it’s not too cold, it’s just right.” (Generally speaking, this last year has been a bit erratic to say the least).

Vancouver has really grown a lot in the last few years, slowly shedding it’s previous reputation of being a wet city full of people that wear yoga pants as an everyday wardrobe essential (I mean, you still see it, but it’s not nearly as bad as it’s made out to be). There’s been a huge surge of Luxury brands flocking to Vancouver, and even opening their Canadian flagships here. From Dior, Chanel, Saint Laurent, Versace, Prada and soon to be Off-White, have all set roots in Vancouver recently.

There’s also been a bit of a culinary revolution in Vancouver, with a ton of new restaurants gaining international acclaim. In 2017, Vancouver had 20 restaurants place in the Top 100 Restaurants in Canada including some local favourites like Savio Volpe and L’ABATTOIR (One of my favourite brunches, but go early for their fresh baked goods, they make a Jelly Donut that will BLOW. YOUR. MIND).  I’m excited to start sharing some of my favourite places to eat, shop and explore in Vancouver with you all very soon!

Caught this cozy little corner at @labattoir_van yesterday during our walking food tour through #Gastown with @vanfoodietours + @newbalancecanada yesterday. Check out where we went on #instastories #gastown #Lifein247

But first, coffee. I’m Joshua (or Josh – I don’t really care which people call me) and I wear a ton of hats (figuratively) and shoes (literally – I’m a shoe whisperer). If I listed off the wide array of things I do… I think I would sound like Daenerys Targaryen (insert 500 titles here), so let’s simplify it for now. I’m a fashion, lifestyle and travel writer, but I’ve worked in several facets of the industry including styling, fashion show production, content creation and PR.

I’ve been fortunate enough to have had the opportunity to interview some pretty iconic designers and personalities, and I love the process of seeing behind that veil. I’ve attended New York Fashion Week (several seasons) and Paris Fashion Week (My first season last September), and I love the energy that pulsates through the city during those times. My love for the fashion industry started as a kid, watching Jeanne Becker on Fashion TV. Growing up, my dad worked in film & TV my whole life, so I spent a lot of time hanging out on movie and TV show sets. I would often sneak off to the wardrobe trailers and hangout with the wardrobe customers, playing amongst the racks of clothes. I thought they were the coolest people in the world – they literally transformed people and made magic. I love to travel and explore new continents, countries and cities and really immerse myself in the culture (and the food, obviously). 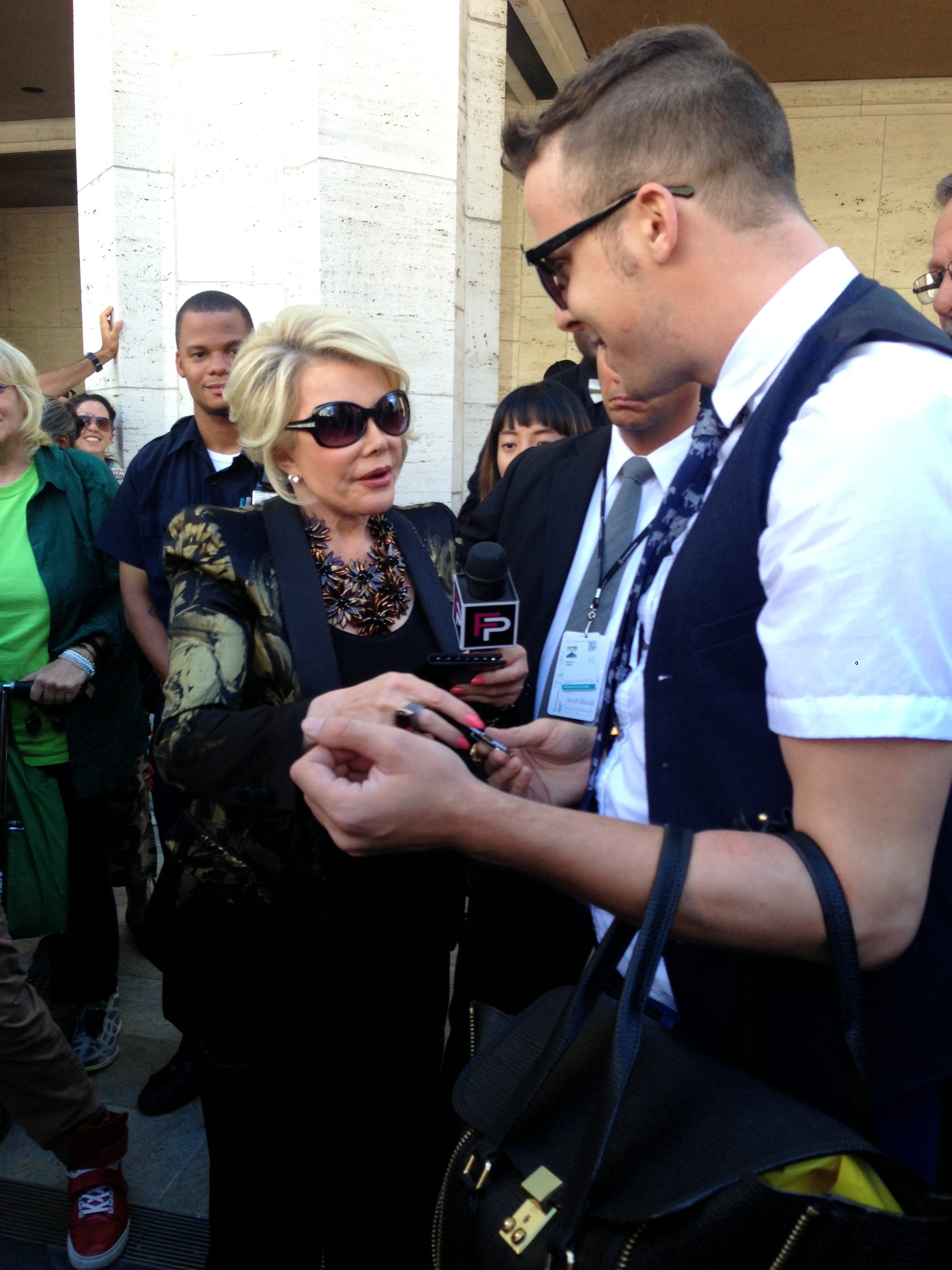 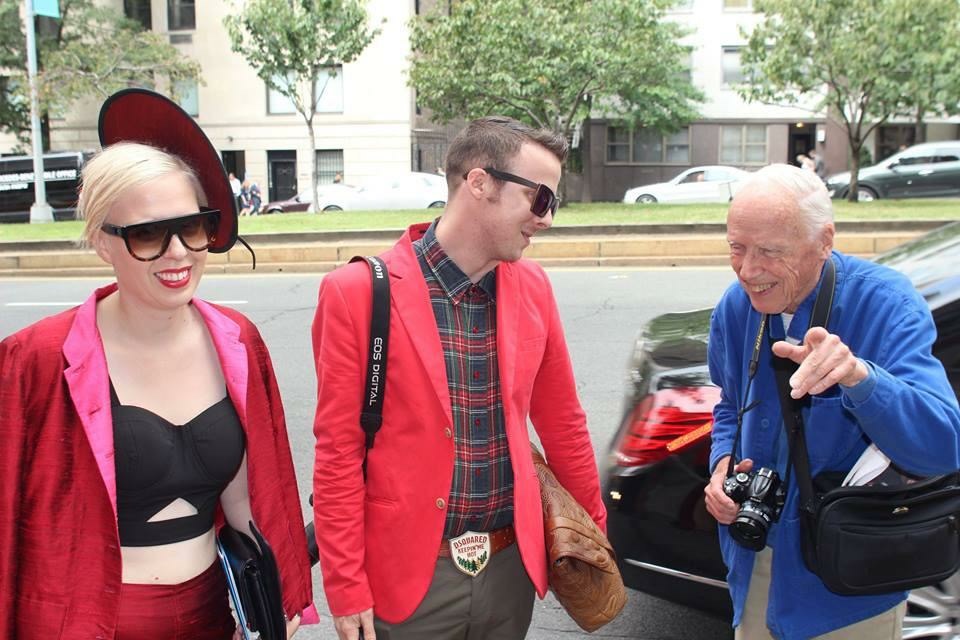 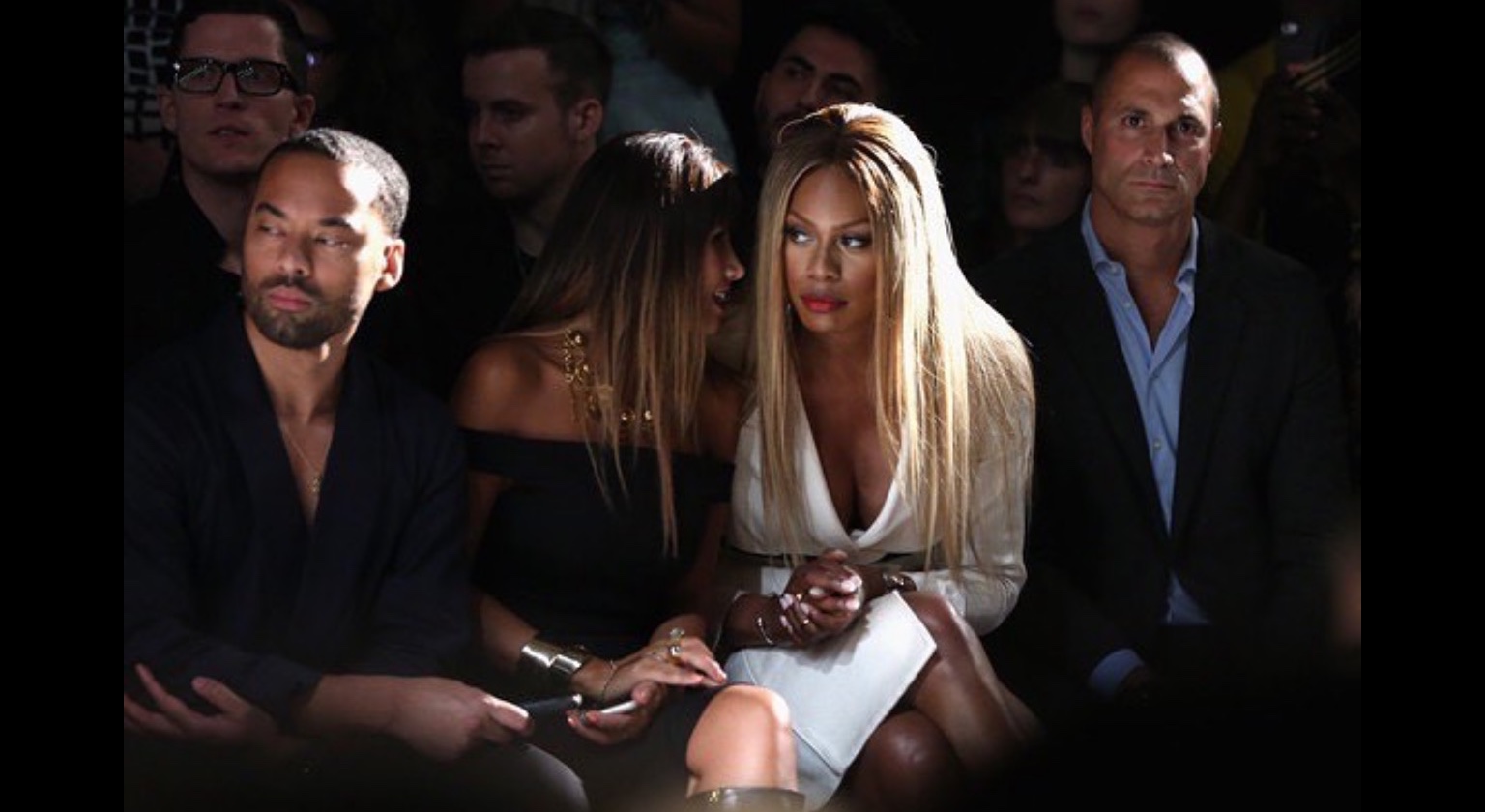 The fall of 2016 through 2017 for me were very transformative years, in a myriad of ways. During that period, I lost a couple of family members and several friends. Let’s just say it was a bit of a wake up call for me to take time to spend with my loved ones. I took a break from blogging during that time, and to be honest it was equal parts liberating and terrifying. I spent time with my family and got reacquainted with my friends outside of the “blogosphere” that I had neglected to spend time with.

During this time. I took a journey inwards and made a list of what it took to get where I am, and what it will take to get to where I want to go. One of my biggest regrets was that I had not done any travelling outside of North America. Last September, I packed only what I could fit in a carry-on suitcase and took the entire month to travel. It should be noted that I have never travelled away for a weekend in a carry-on suitcase, let alone an entire MONTH, smh. I went with two of my girlfriends and we flew into London for the night before heading to Spain and Gibraltar.

Gibraltar is a British Overseas territory at the southern tip of Spain. We actually stayed in Algeciras Spain, and commuted (only a ten minute taxi) to the Gibraltar border and walked to the festival from there (it should be noted that having to go to a music festival with your passport is TERRIFYING). This first leg of the trip was to go to MTV Presents Gibraltar Calling, which had one of the most diverse line ups I had seen (Ricky Martin 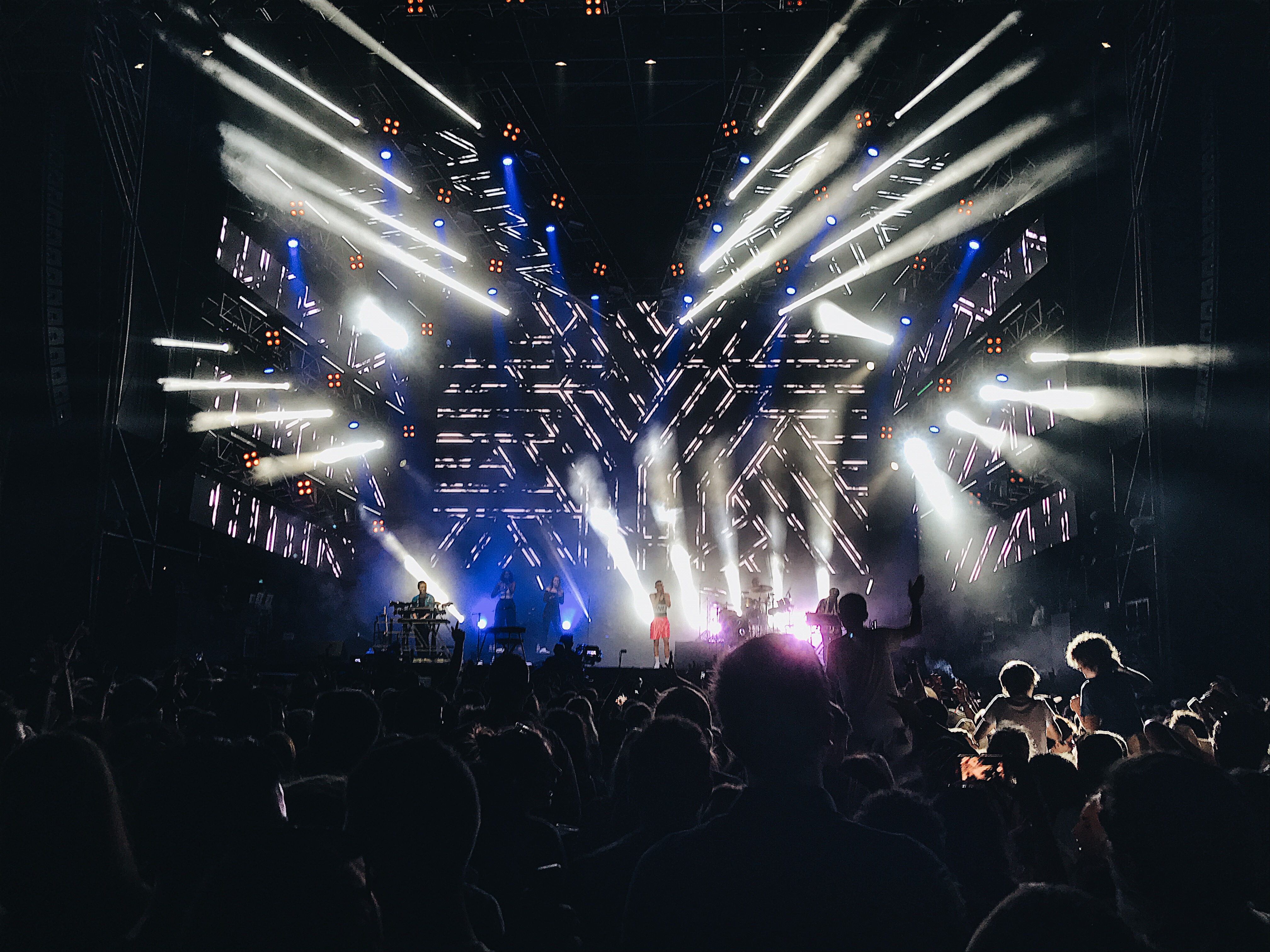 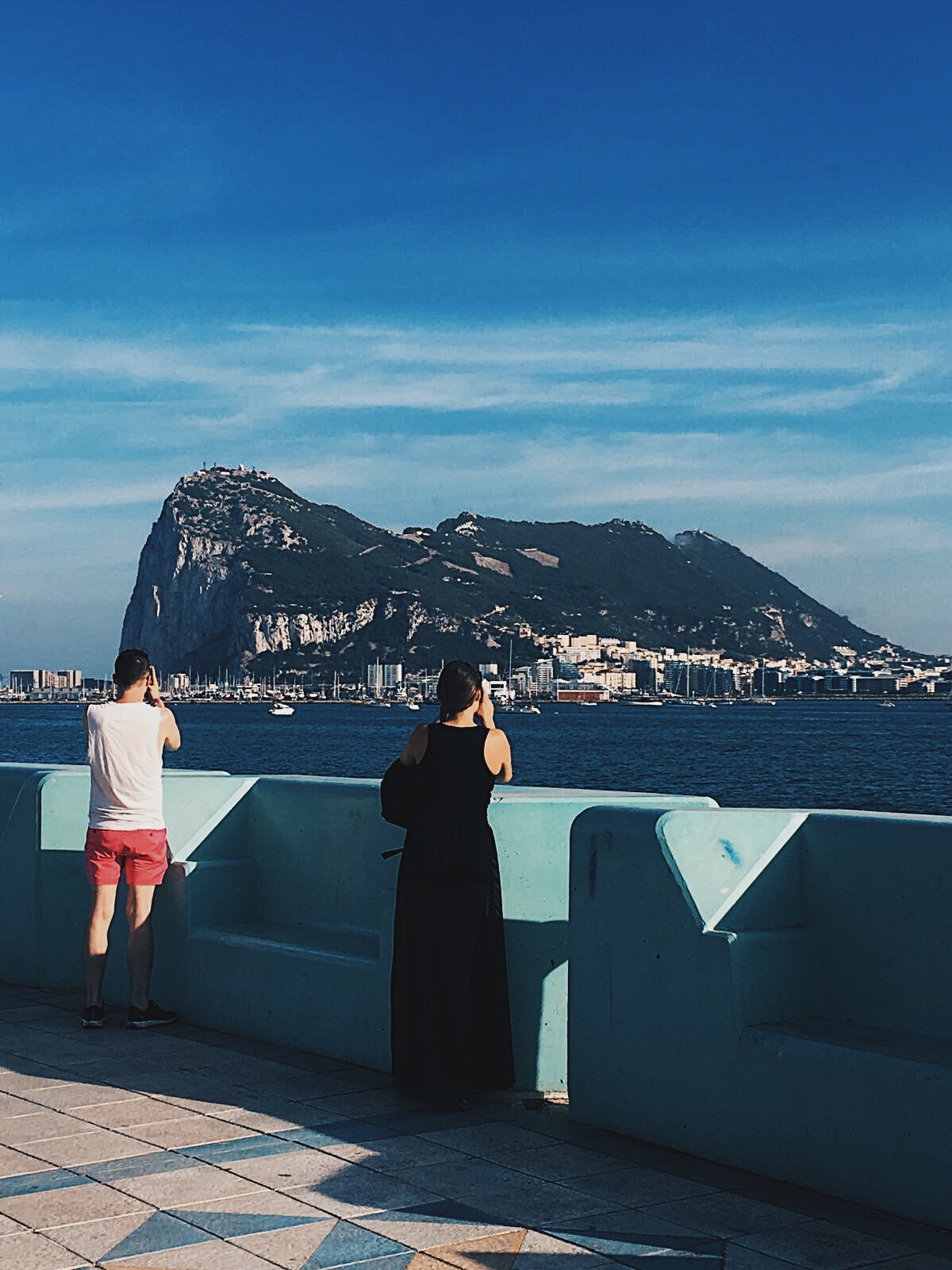 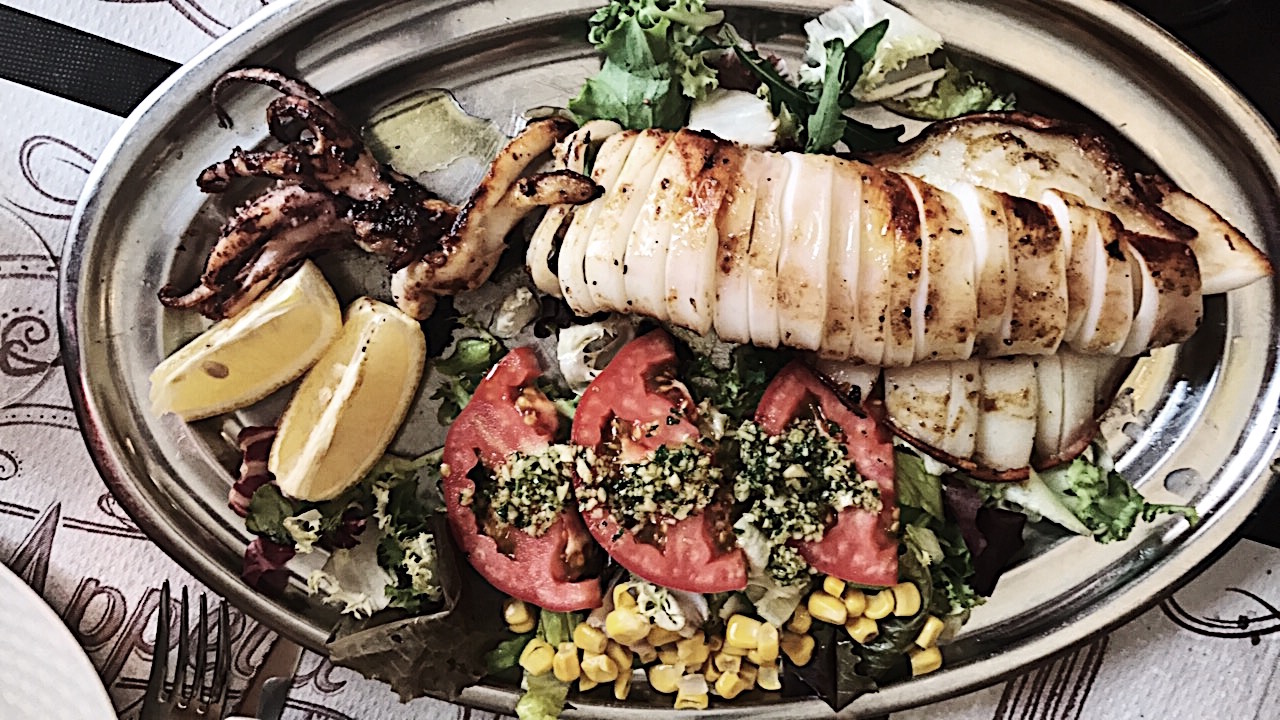 The second leg of the trip, we travelled through Morocco for two weeks, first landing in the port city of Tangiers via a ferry we took from Spain. As soon as we walked off the boat it was 40 degrees celsius – the air was thick and tasted like sea salt. We stayed overnight in Tangiers before heading to Chefchaouen – “The blue city” – by bus.

At one point, as our janky death-trap on wheels ascended up a hill, the engine gave out, the driver lost control and we slid back 50 feet, nearly going off a cliff. When we arrived, I was flooded with a range of emotions, from relief for making it off that damn bus, to utter bewilderment seeing this magical blue city that I had only seen in pictures, pop from the page. 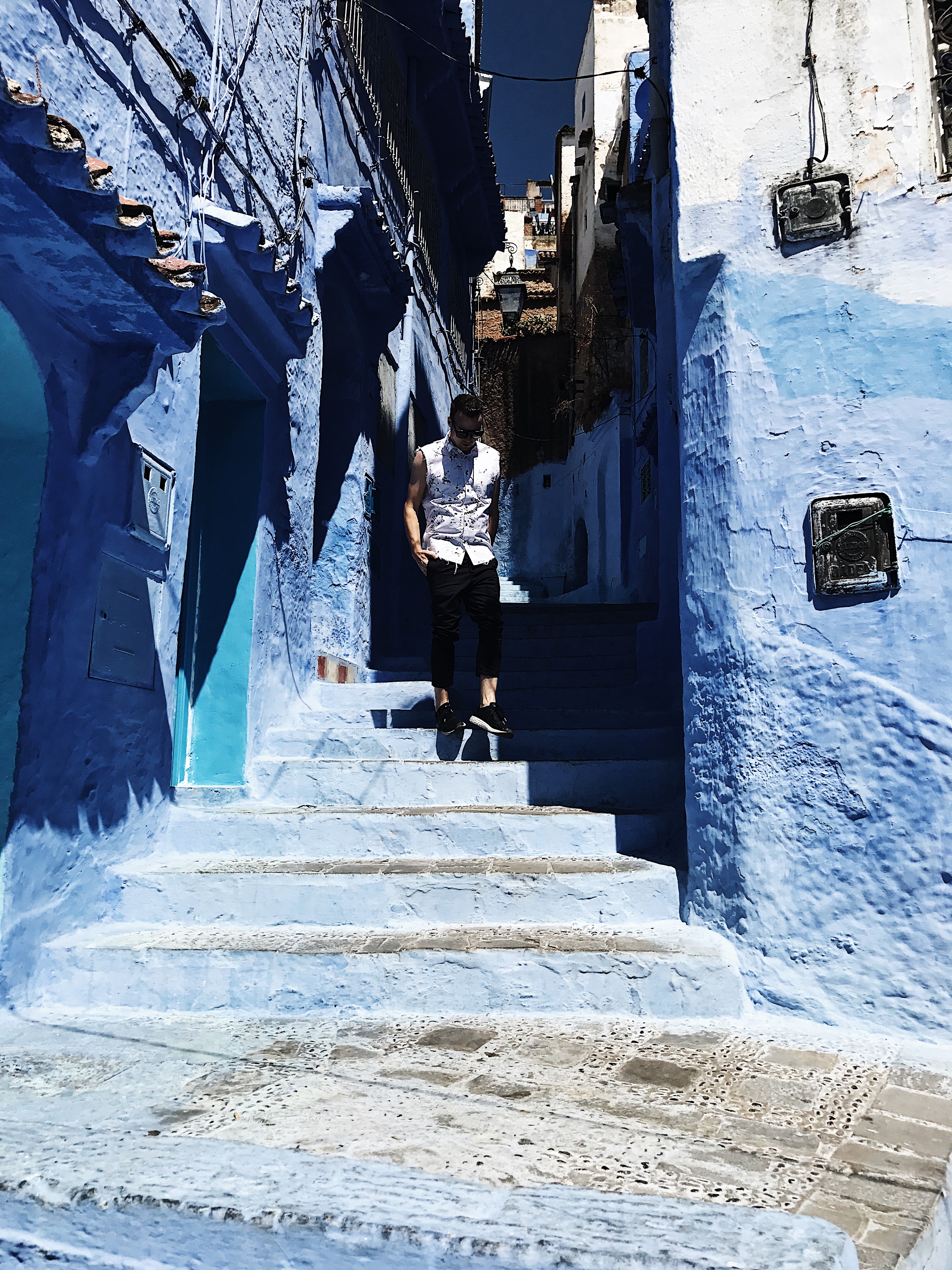 From there, we went to Fes (known as a cultural capital in Morocco) where we got lost in the catacombs of the Old Medina, distracted by the smells of spices I never knew existed. After a few days in Fes we went to Casablanca, which truthfully lacked any sort of romance it’s namesake movie evoked. We did find this one really cool area with some incredible restaurants, however it was a 45 minute walk each way – which we would do twice a day.

Our final stop was Marrakech, which was definitely the most westernized and “liberal” (see – still conservative, but because of all the tourism there specifically we were less often judged on our attire). One of the things I HAD to see was The Jardin Majorelle (The Majorelle Garden) – which was owned by Yves St Laurent and his partner Pierre Bergé (who passed away a few days prior to our arrival). Yves would come here to design his collections 2-3 times a year, and it’s said the way he designed and his colour influences were a celebration of the city that was close to his heart. 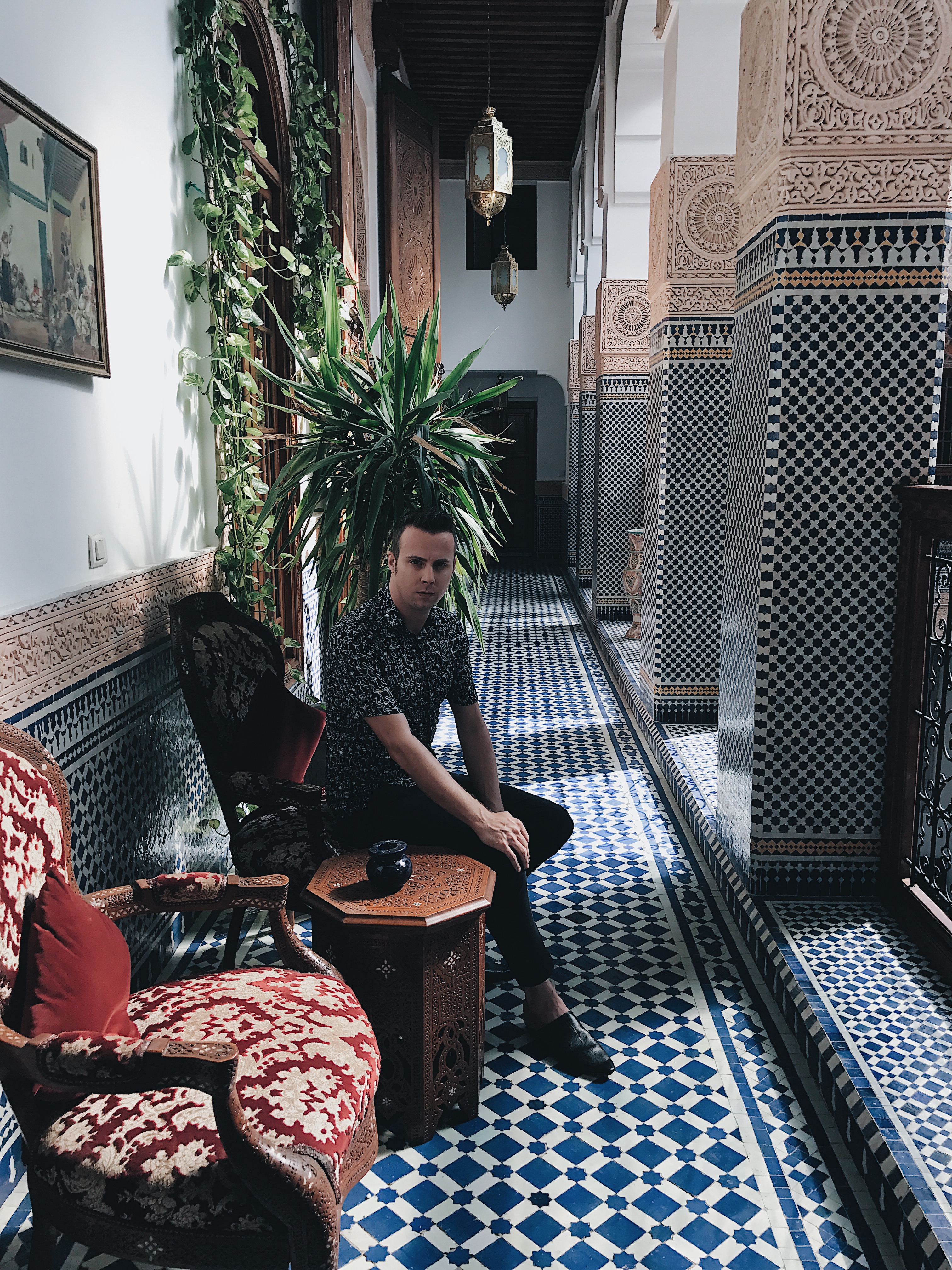 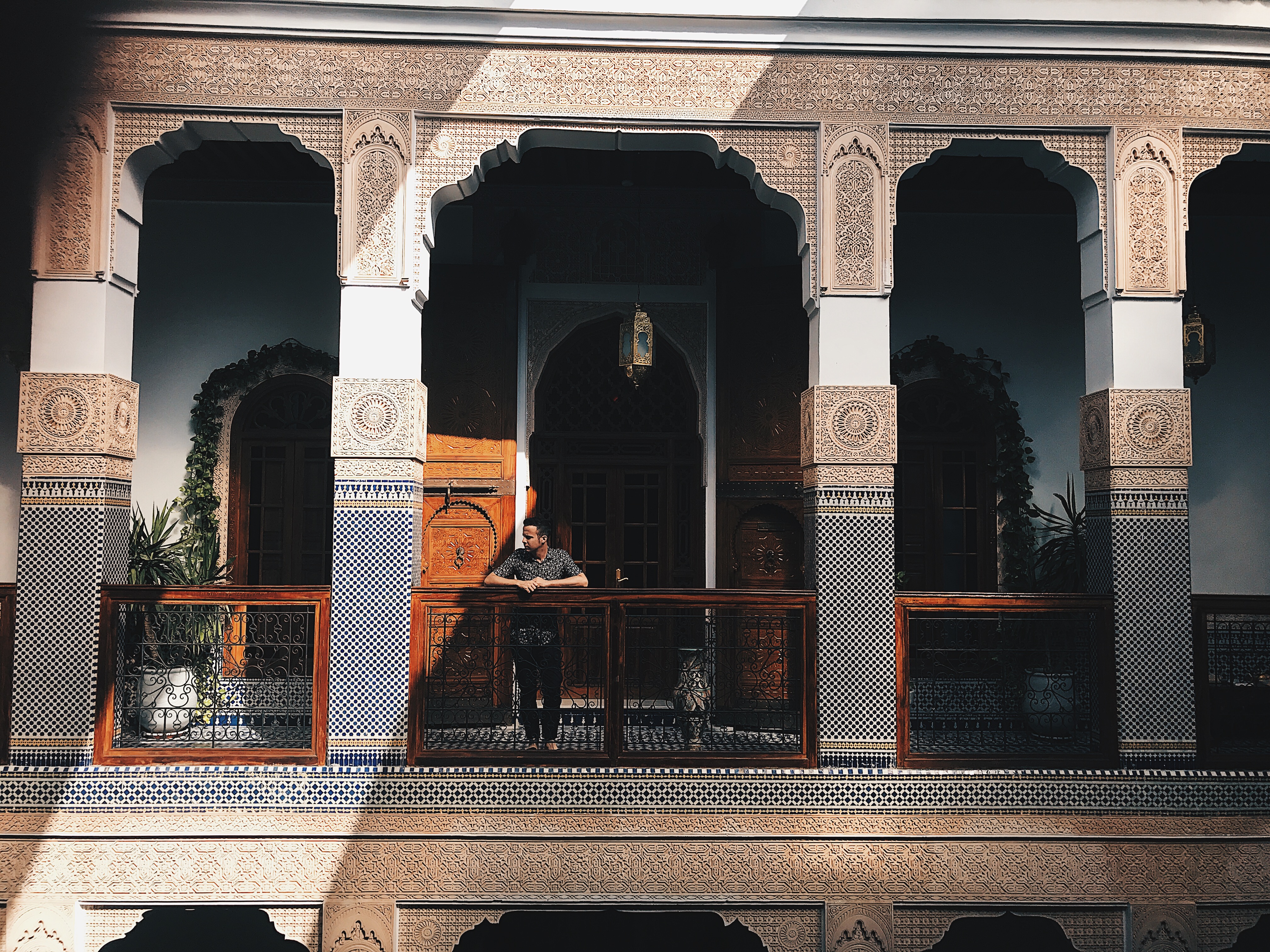 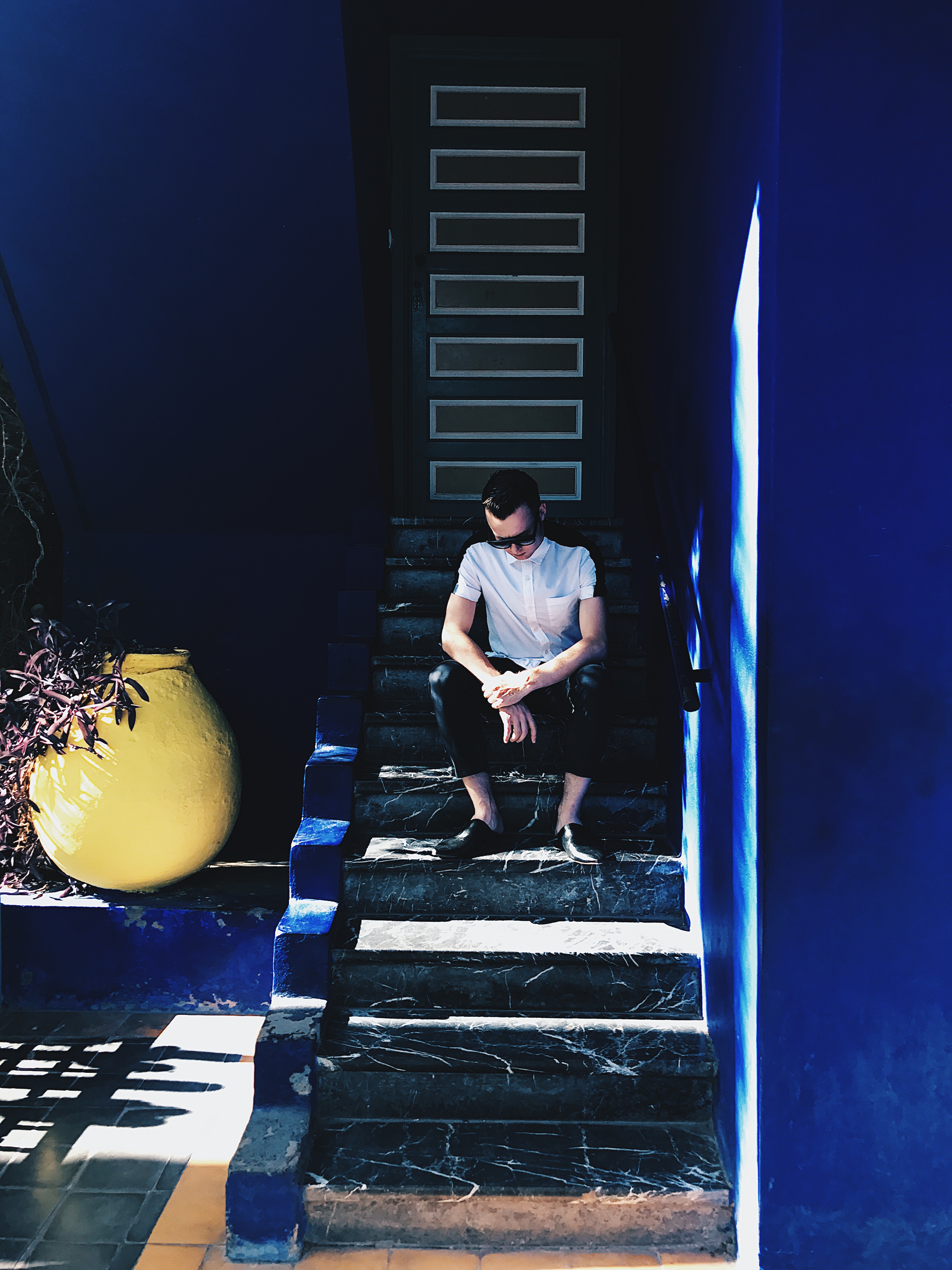 We came to Marrakech for the Oasis Music Festival – a 4 day house music festival located in the desert in Marrakech. This was one of the most beautifully designed festivals I had ever went to, 2 stages, a sheesha area located on platforms above water surrounded by greenery, with several seating areas created with oversized pillows, berber blankets and poufs to sit on. They even had a meditation area where they held yoga and meditation classes beneath the palm trees, as well as Henna or face painting – like what? 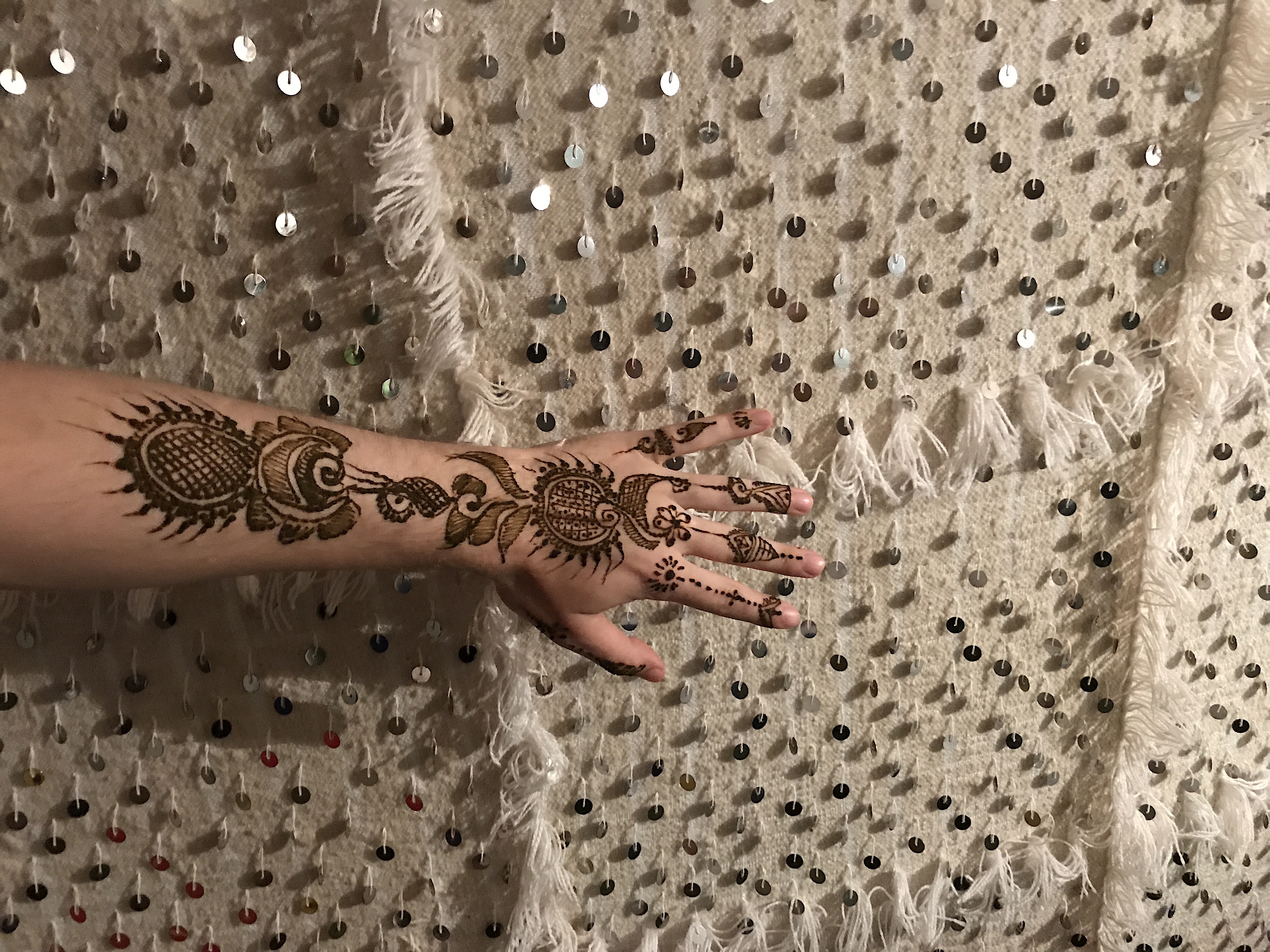 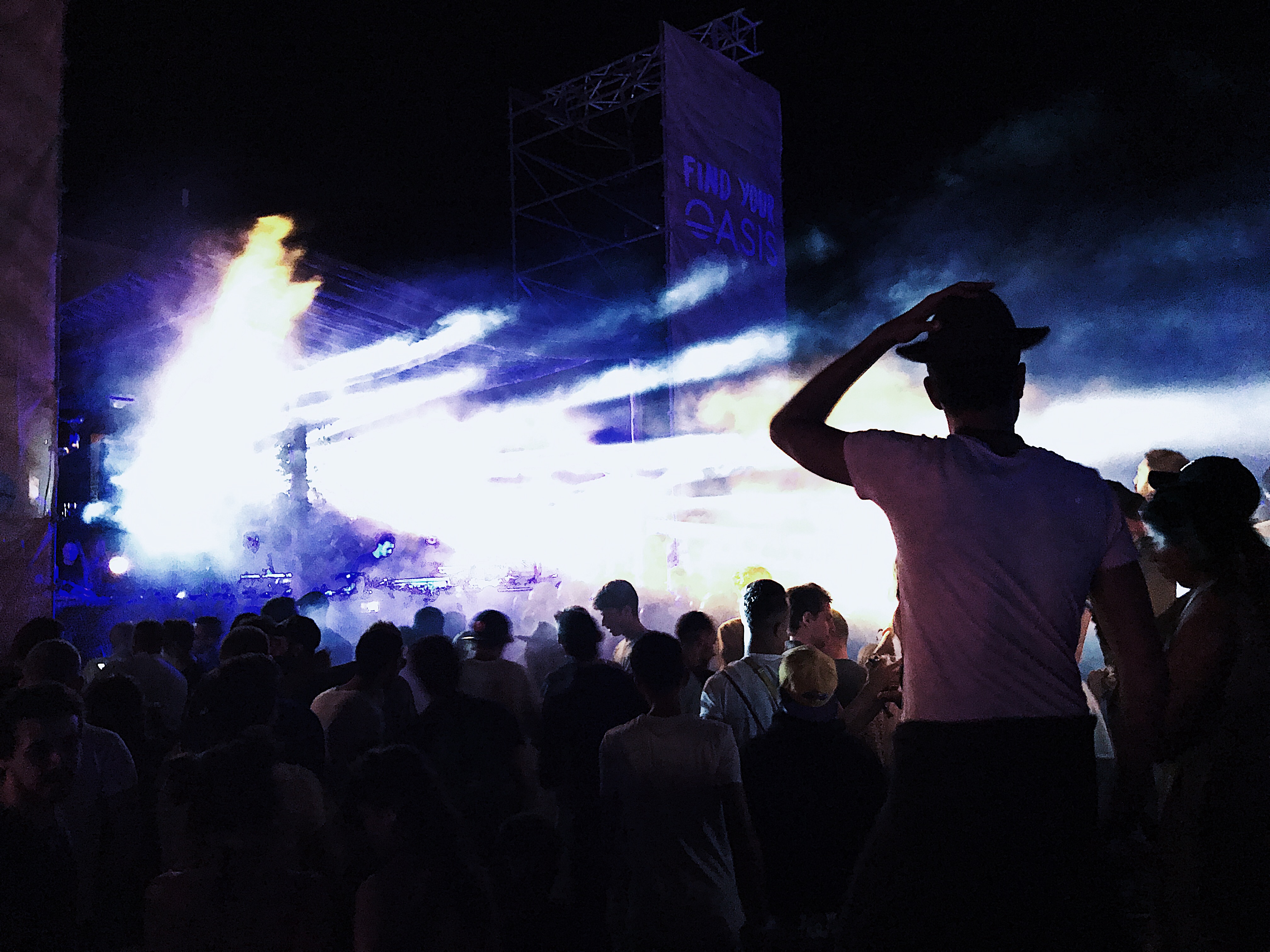 For our last night in Morocco, we stayed at Riad Jardin Secret, a oasis designed, owned and operated by husband and wife, Cyrielle and Julien. The Riad is a cultural amalgamation of old world marrakech, with a parisienne veneer. There are several seating areas with the original hand carved mouldings, mixed with modern and traditional art, and a fashion and art book catalogue that one could only aspire to have. We also ate up in their private rooftop terrasse on the last night, the sky blushed in sherbert tones during the sunset. 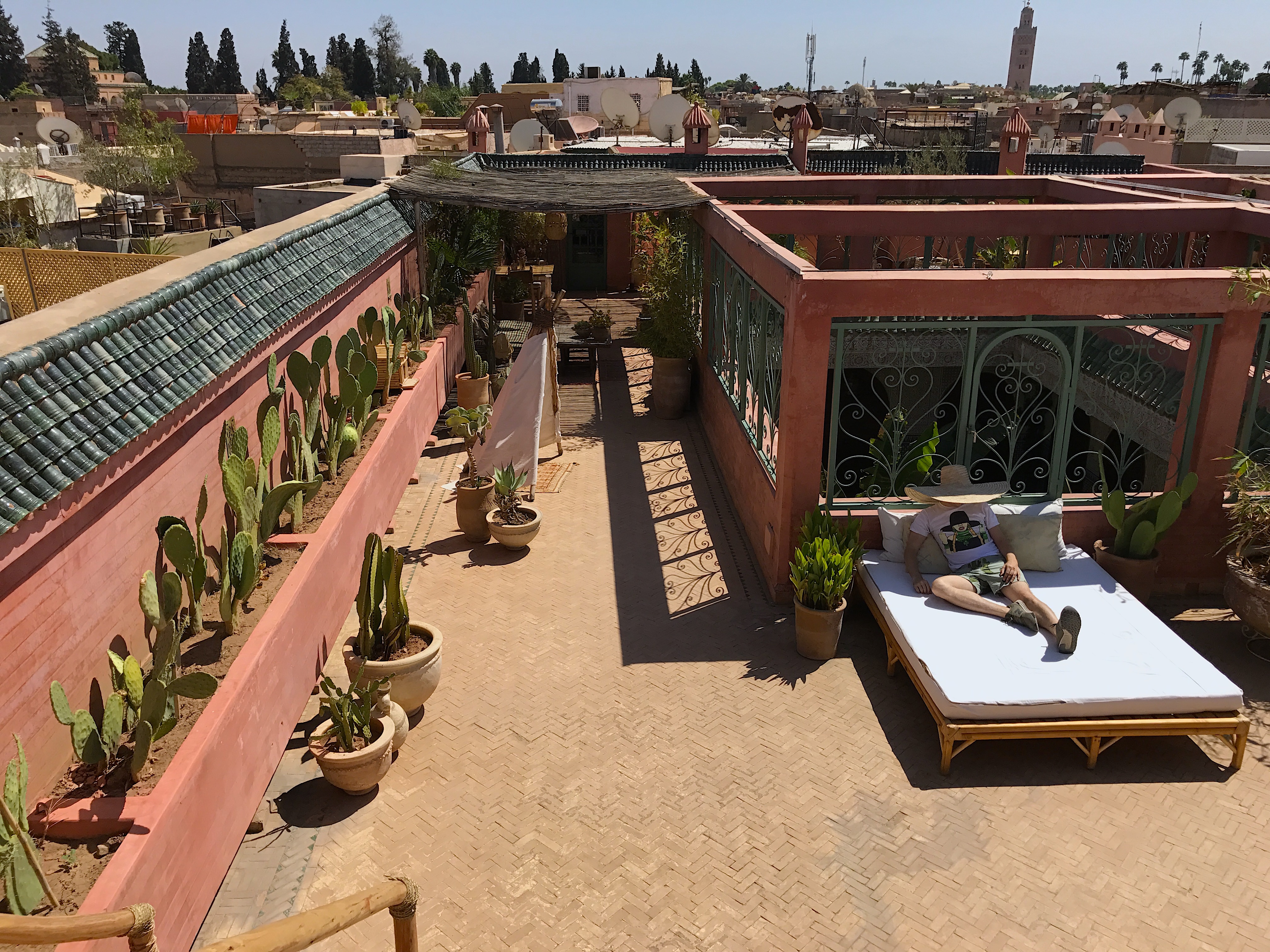 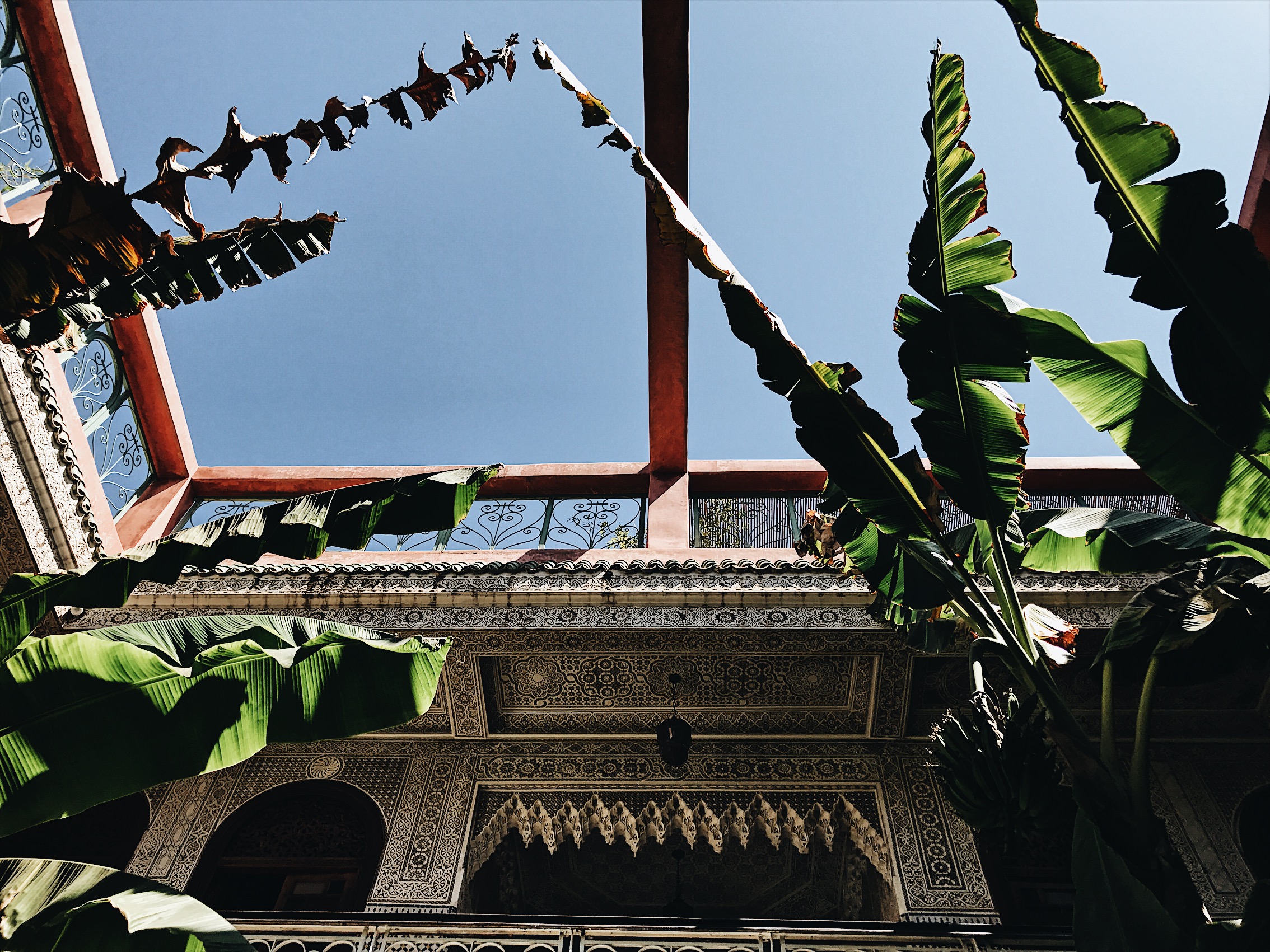 From Morocco, I flew to London and separated from my travel companions – staying there to visit my aunt who works in the music industry in London. I LOVEEEEEEEEEEE London, I felt so at home there, and was even giving directions by my second day. I then flew to Paris for Paris fashion week or a few days to see some other blogger friends from Vancouver, L.A and Berlin. Yes, I ate all the pastries, and even was drinking espresso with no sugar, because PARIS. Then I went back to London for a few days before flying home. 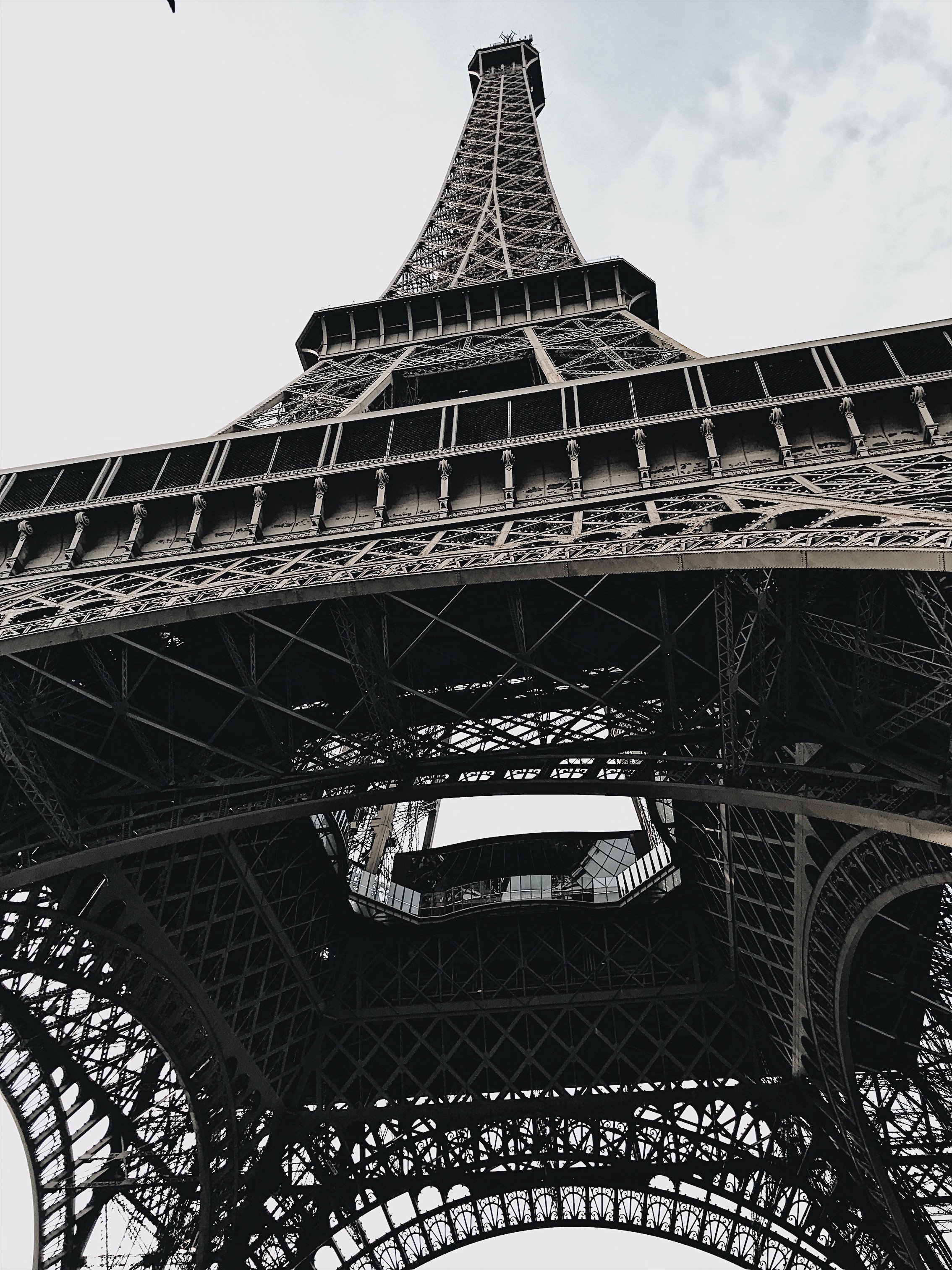 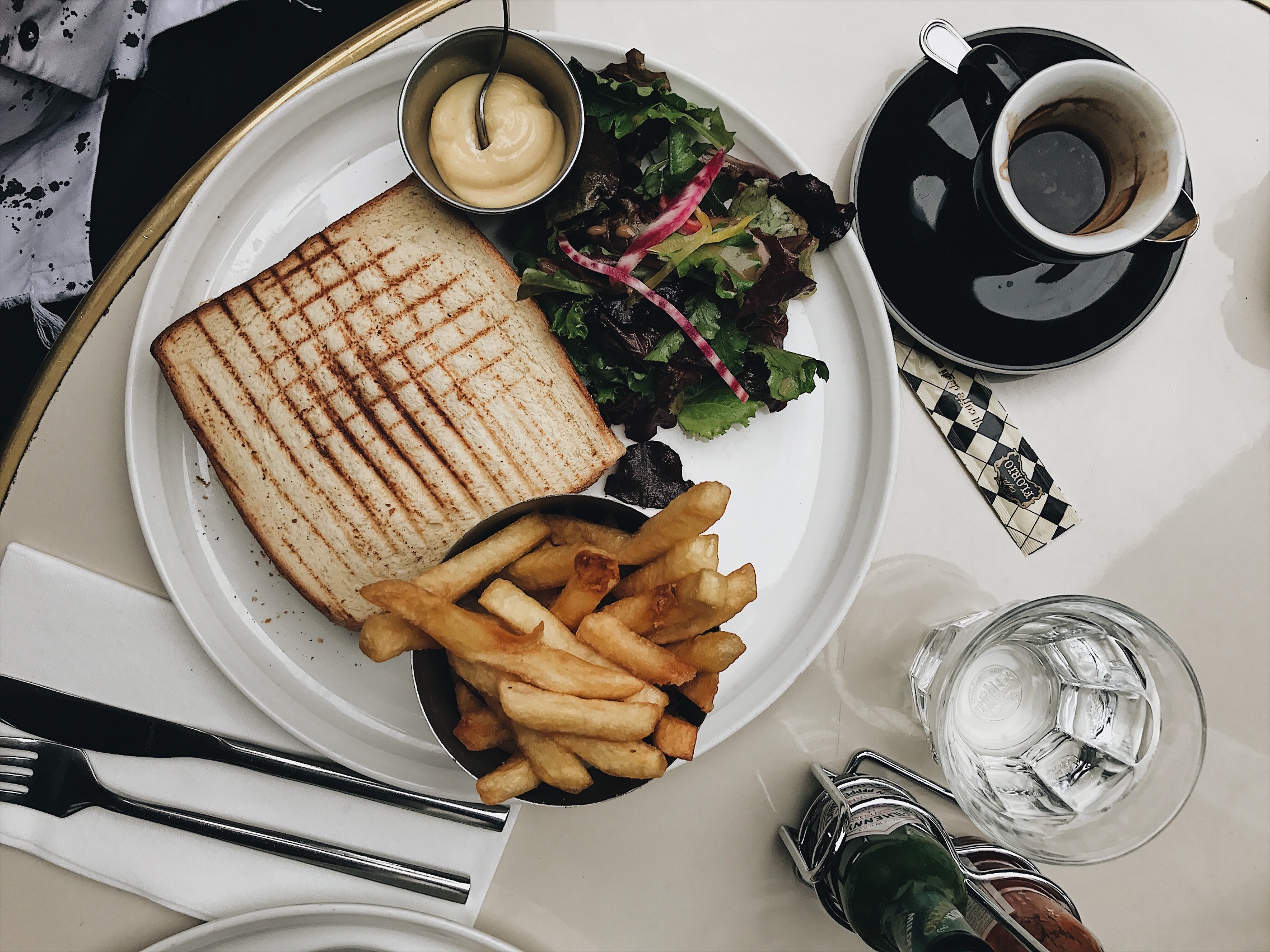 For 2018, I have set some pretty big goals, one of which will be launching my new personal blog that will focus on fashion, lifestyle, travel and grooming. I also plan on doing a few trips and hopefully a couple of music festivals this year. I’m hoping by the end of this year, I can hit two more continents. I also want to take an active approach to eating healthier and being more active, I’ve said it for a long time but now I need to act on it. I don’t have that 19 year old metabolism anymore *Insert Kim Kardashian crying Gif here*

So let’s see in one years time if I manage to make all goals these come true.

“If you can dream it, you can do it.” –Walt Disney