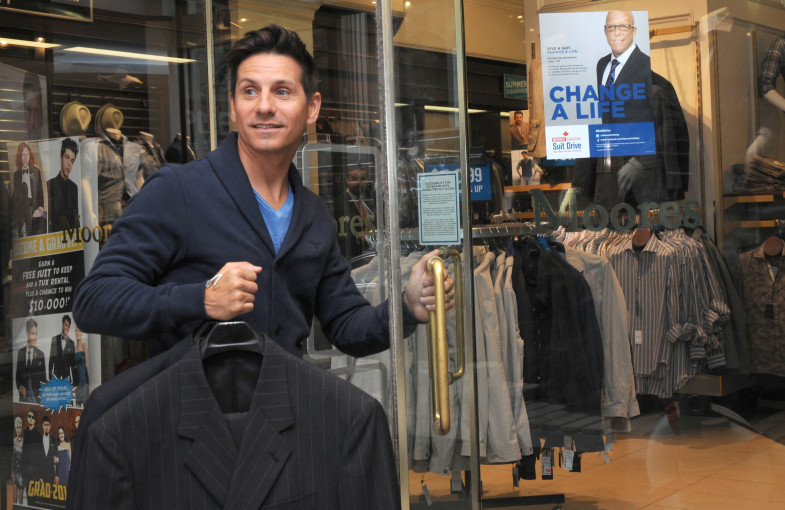 What do you think of when I say the word “suit”?  Are you immediately launched into visions of office workers and stock market traders or scandalous work place related fantasies about Jon Hamm? (Oh wait that’s just me isn’t it). Well, what if I told you that a suit is not only a symbol of employment but that it can also act as a beacon of hope for someone in need?

Unemployment is a serious issue here in Canada.  Did you know that there were 744,600 reported cases of unemployed men across the country in April?  Well, the Moore’s Canadian Suit Drive is looking to change this by working with more than 60 local recipient organizations across Canada to provide free suits and professional clothing to men who are looking to seek employment.

So, I had the absolute pleasure of sitting down for an early morning coffee with the one and only ET Canada Co-Host Rick Campanelli to chat about his mission as the spokesperson for this year’s Canadian Suit Drive.  He’s literally giving people the clothing off of his back in order to help the campaign meet their goal of 50,000 donations to help Canadian men make a strong first impression when transitioning back into the workforce. 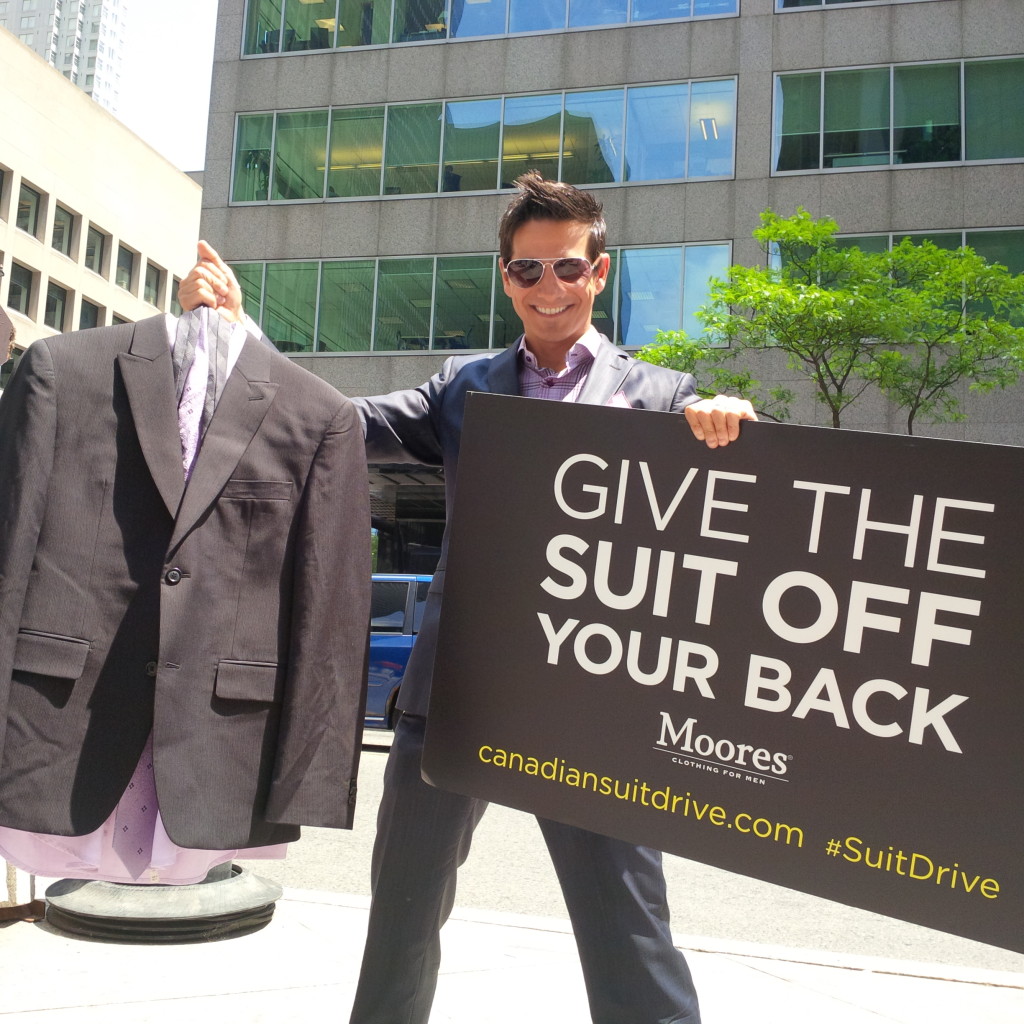 So I love me a man in a good suit.  Aside from the obvious eye candy aspect, what does owning a suit mean to you?

“Well, I grew up not wearing a suit.  Actually I was gonna tweet out a picture of my first suit, it’s a family photo I have.  I grew up wearing jeans and casual clothing and would just use the same suit for weddings and funerals.  So starting at ET Canada and wearing a suit, at first I was a little hesitant, like do I have to wear this thing all the time?  But I love wearing one these days.  I feel so incredibly confident when I put a suit on.

I never felt confident before.  I was a shy kid growing up – I didn’t talk much.  But when I put a suit on, I feel like I can get through a 5 minute interview with George Clooney or John Travolta.  I feel at their level, but I’m sooo not [Laughs].  But putting a suit on is like when a superhero puts their cape or costume on, it sounds corny and weird.  And for women, when you put on a beautiful ball gown, a beautiful dress and heels… or a power suit, there’s this different feeling.  I don’t know how to explain it but, with me, I just feel it and it helps me.  It helps me in my interviews and it helps me when I’m in the studio doing the show.  It’s just an amazing feeling.”

Tell me about the first time you bought a suit.  How did it make you feel?

“I’m pretty sure it was in high school and it was for prom and it was awful.  I think it was from International Clothiers and it was one of those suits that was wayyyy too big and not fitted at all.  I only started going for the more fitted tailored look over the last few years.  Even when I first started on ET Canada, they were still pretty big on me.  I liked baggy clothing, I felt more comfortable.  But now it’s all tight and I even have tapered jeans, skinny jeans and skinny slacks with my suits.  But my first suit would have been one of those huge oversized, two-for-one deals for prom back in high school that I bought personally with my own money.

But the first suit that I ever owned when I was like 4 or 5 for my family photo.  You gotta see this suit, I wish I still had it so I could put my son into it, it’s like a classic checkered brown and white and that thick material, almost like tweed, so thick.  But you should have seen what my older brothers were wearing and my sister… oh God!  This was like mid-70’s when this picture was taken.

But these days I love buying suits because I know what I’m looking for.  I know exactly what I want and it’s not just about buying a suit, it’s about going into a tailor and getting it all shaped and fitted nicely for my body.  I don’t know if anyone else could ever wear one of my suits, I’m hoping they can.  But I like them like a European cut, a nice cut, like a glove basically.  The total opposite of what I used to wear.  It’s all about the fit.  You can buy a suit from anywhere, even International Clothiers – wait are they still around [Laughs] – but if fitted properly, it can look gorgeous on a guy.”

There are so many charities out there to support.  What made you want to get involved with this one?

“I do help out a lot of charities, it’s what people should do.  If you can, than why not?  Maybe people don’t have the time or the interest to help and that’s cool too – if that’s their thing.  But ever since I was a kid, I’ve been helping out people in need, it just makes sense to me.  With this campaign, it makes even more sense because I wear suits and I have suits that I don’t wear anymore that are collecting dust.  So why not give them to someone who’s gonna really need it and then it helps him change his life and helps him feel better about his chances of getting a job?  It’s all good, it’s all positive like pay-it-forward type thing.  It’s simple.

I’m so honoured that I was approached to get involved because I think I’m still too shy, I would never approach an organization.  I do a lot of work with World Vision and other organizations, so to me it just makes sense to help and do what I can to spread the word and educate other people.  I’m sure there’s a ton of people that still don’t know about this campaign so we have a lot of work to do on getting the word out.”

As an influential man in the media, do you have any tips for someone who’s trying to get back on their feet and into the workforce?

“It’s always a pretty intense time in someone’s life, it can be intimidating.  For me, I try to tell a person that if you want that job you should just be yourself because if you get the job by putting on this mask, by being someone different, it’s just not going to work out.  You have to be yourself in that interview.  You’ve got to know exactly what you’re talking about in that industry that you’re going after.  I find that if you’re passionate about what you’re going after in life and in terms of jobs, it’s much easier.  You’ll love going to work every day.

And you know, the suit is like the cherry on top.  You want to look good, you want to give off that first impression.  You want it to be an amazing impression to the person on the other side of the desk.  So if you walk into the room looking great, feeling great and confident, having all of those aspects working for you – I think you’re gonna get that job.  It’s just another piece of that pie to help the person in getting that job.  These are all smart guys that we’re dealing with here, there’s just some obstacles in their way at times.  Whether it be finances, or cutbacks, or whatever is it – whatever their story is, we’re just trying to give them all of the tools they need to get to the next chapter in life and get that job.

If you have the old suit lying around, why not give it to someone who needs it.   Add in the incentive of 50% off of a Moore’s suit purchase and it’s a win-win for everyone involved.” 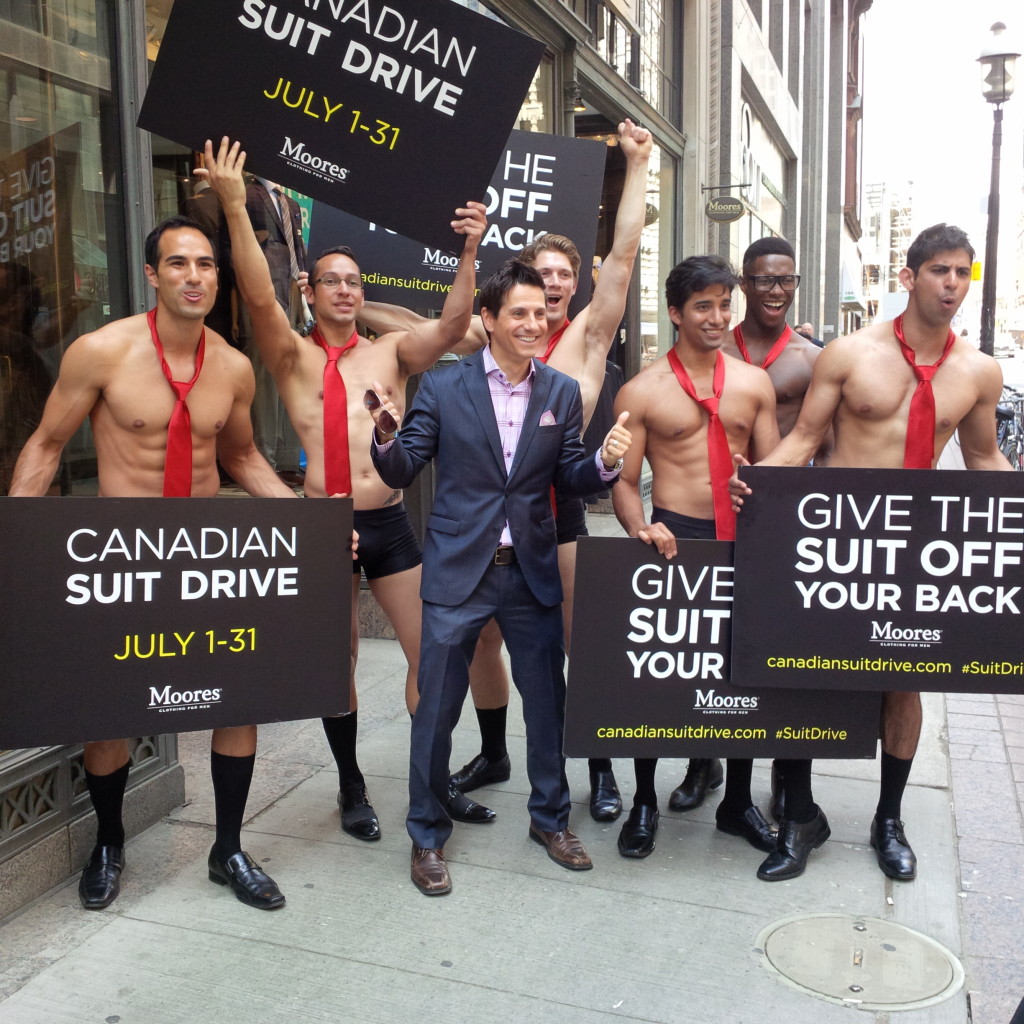 Five years running now, this year’s Canadian Suit Drive runs from July 1st to 31st.  All gently used professional clothing is welcome: suits, shirts, jackets, pants, ties, belts and even shoes!  Professional women’s clothing is also welcome.  Pop into any of the more than 100 Moore’s stores across Canada and as a thank you for your donation, customers will receive 50% off of their next purchase (some exceptions apply).

To help spread the word, Moores is asking consumers to post about the Canadian Suit Drive on social media. Moore’s will donate $1 (up to $10,000) each time consumers do one or more of the following:

3.Share any of the CSD videos found on www.canadiansuitdrive.com

Previous post:
Contest | Kalloné Intimi loves Wood & so do I! Next Post:
Toronto | bE a little different with bE SixFifty Hotel