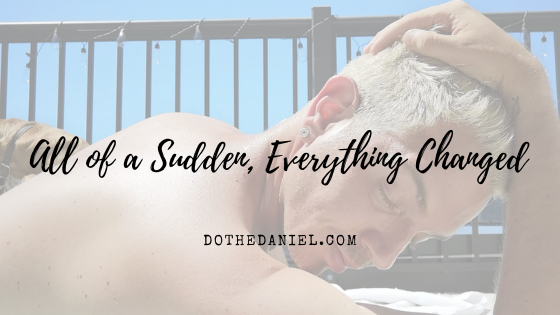 Not EXACTLY How I Saw This Year Going

As with most of my more vulnerable and honest blog posts, I am often back and forth on if I want to hit publish at all. While I love that I can sit here and share (sometimes too much ) with you my darling reader, the vulnerability it takes to pull the curtain back and share the whole picture is at times overwhelming.

I want to say that everything in my life is perfect and it’s all smiles and big pay cheques with brand partners, but in reality it’s far from that. And I am sitting at my dinning room table in July of 2022 feeling like I’ve failed in several ways this year and all over again.

I guess we have to hit the rewind button back to January in order for you to understand the whole picture. At that time, I was taking anti-depressants in an effort to regulate my mind and my spirit. I was working full time but had been contemplating leaving that role because I wasn’t feeling fulfilled in the way I thought I would. It was exhausting to keep up appearances at work in such a challenging (and if I’m being honest, toxic) environment behind the scenes and everything kind of came to a head.

Unfortunately the medication I was taking at the time had some potential side affects, including the ability to amplify (to an ungodly level) the symptoms of bipolar disorder. Having never been diagnosed, I wasn’t worried until it was too late. I have never felt so out of control of my emotions and unfortunately that led me to extremely unhealthy coping mechanisms. Add to this all that Julio and I were still doing long distance.

The perfect recipe for disaster.

After a particularly challenging point in my life, my relationship with my then management team began to unravel. Out of respect for the parties involved I won’t divulge too much, but I was left feeling betrayed in a situation where I opened up entirely to them about my mental health and was essentially told they were letting me go.

As someone that has sought the help of mental health practitioners for my major abandonment issues, this was the icing on the cake for me and I felt as though my world was starting to crumble around me again. I like to joke that I am the comeback kid, but in actuality, the cycle of success to shambles can take its toll on you if you live it too many times. I’ve certainly had ups and downs as many of us do, except now I was living that all again on medication that made the extremes that much more real, and that much more painful.

My mental health was at its worst. My marriage was not in a good place. I was once again unable to look at my own body in the mirror in shame. My job was a mess. My management essentially told me I wasn’t worth their time and I was stuck in Ottawa on my own.

So as I do when I feel life falling apart, I pushed everyone away. I bailed on friends, stopped talking to my family and even got to the point where I thought it would be best to separate again from Julio because both of us were miserable and communications was breaking down.

In an effort to change my perspective I resigned from one job and took another one which on paper sounded like a dream. Julio eventually made his way to Ottawa though our relationship was still in a bad place, and I was stuck coping in ways I have done for years. Two months into a new job that offered no training, no guidance and no structure, HR walked into the room during the month of June to tell me that things weren’t working out and I was being let go.

Because I was in probation there was nothing I can do. To this day I probably could fight the decision being that it was Pride month and I was let go after asking for time off to celebrate with Julio. The hard truth was that I had no leaders and worked for an impulsive team that lacked structure – but I just didn’t have the fight in me. Plus I’m not sad I don’t work there which goes to show how invested I was. Not to mention all the dirty secrets I know about the inner “workings” – but I don’t want to live in that headspace nor do I care to relive that trauma.

At 39 I was being fired. With everything else going on.

We had just bought a car. We were trying to save for adoption and this wasn’t how life was supposed to be going after I ripped up our roots in Toronto to live the life we wanted. It felt like the universe was slapping me in the face for trying to fit into the idea of what I thought I should be doing.

I had to shift gears and fast, all while keeping up appearances online because I now only had the blog and my social media now during Pride month and I couldn’t lose that income. So, I dove head first into content creation as a full time job after promising myself and Julio I wouldn’t end up in this situation again. June was the most successful Pride month I’ve ever had, and when it was done I took a deep breath and hard a long hard look at my life.

I did it against all odds. And I am so fucking proud of myself.

I am on a very bumpy road right now as I finish my last few contracts with management, negotiate my own contracts again, chase invoices as a freelancer, and try to balance the books. Not to mention I have to file my taxes after avoiding the subject with Julio because there are so many moving pieces to our finances. Add to that, the asshole in the Byward Market the other night who threw vicious slurs at us in front of a huge crowd that did nothing, bringing back all those vicious memories of when I was gay bashed and ended up in the hospital.

The old me would be a mess right now. And today I am celebrating my strength and my tenacity. Is this the ideal place? Absolutely not. But it is where I am and I am making the best of it.

Right now, although I’m still waiting on SO many invoices, I am happier than I have felt in a very long time. I am working with brand partners that respect me, and appreciate what I do. I am trying to be physically active every day and am mindful of what I am putting into my body than I have been in years. I tell myself every single day that I deserve to be happy, to make lots of money and to celebrate my success. I’ve been doing this for a long time, and I am so proud that I am still relevant and have the connections and support I have.

This is NOT how I saw 2022 playing out, but there have been so many more doors opened even after a few of them slammed shut.

That’s a lot for anyone to handle, let alone while trying to maintain a personal brand online. It’s embarassing for me to think about, but I want to be honest with you. Because many of us are battling so much behind the scenes and it can be exhausting to do it in silence.

I want you to know something as you’re reading this. Regardless of if life is a giant mess like mine kind of feels like right now, or you’re just having a shitty day, it’s important for you to find a way to talk about that. Be it in a journal, with a mental health practitioner or with someone you trust. Because you don’t have to fight these battles alone.

Right now the universe is smiling on me. It may take some extra time for that money to finally arrive and things are going to be tight while I wait, but I will be okay. The road is bumpy but I’m still moving forward even if it a little slower than I would have liked.

I am working on my marriage. I am working on my relationships with friends and family. I am focusing my energy on my creating and story telling. I am asking the universe for what I need. And at the end of the day I am just trying my best under very challenging circumstances.

It’s all I can do and that’s okay.