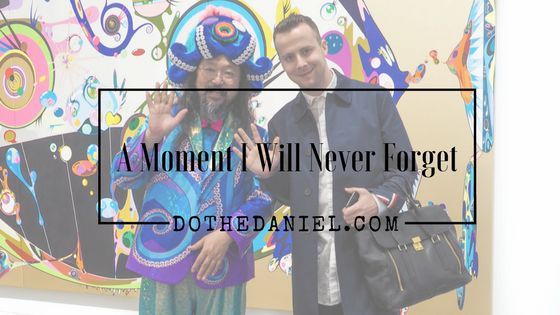 Takashi Murakami’s “The Octopus Eats Its Own Leg”

#ICONIC ??‍♂️ If you don’t know the name Takashi Murakami, then come out from under your rock and take a trip to the Vancouver Art Gallery ? @takashipom is a genius Japanese artist and #DoTheDaniel Contributor @joshuadlangston was fortunate enough to meet him at the sneak peak of “The Octopus Eats Its Own Leg” exhibition! Watch this exhilarating moment on our Stories now ? photo by @randasalloum – – – #theoctopuseatshisownleg #takashimurakami #vancouver #dtdtravels #dtdteam #vagxmurakami

“The exhibition takes its title “The Octopus Eats Its Own Leg” from an ancient Japanese parable, tako ga jibun no ashi wo kurau. It refers to a situation in which one survives for the time being by feeding on or sacrificing oneself. The octopus eats its own leg to survive, but does so knowing the tentacle will regenerate. The phrase symbolises the cyclical nature of Murakami’s practice and the creative output of the Kaikai KiKi studio. Murakami is the octopus: he consumes history, culture and even his own oeuvre and fame to persevere as an artist.” – Vancouver Art Gallery 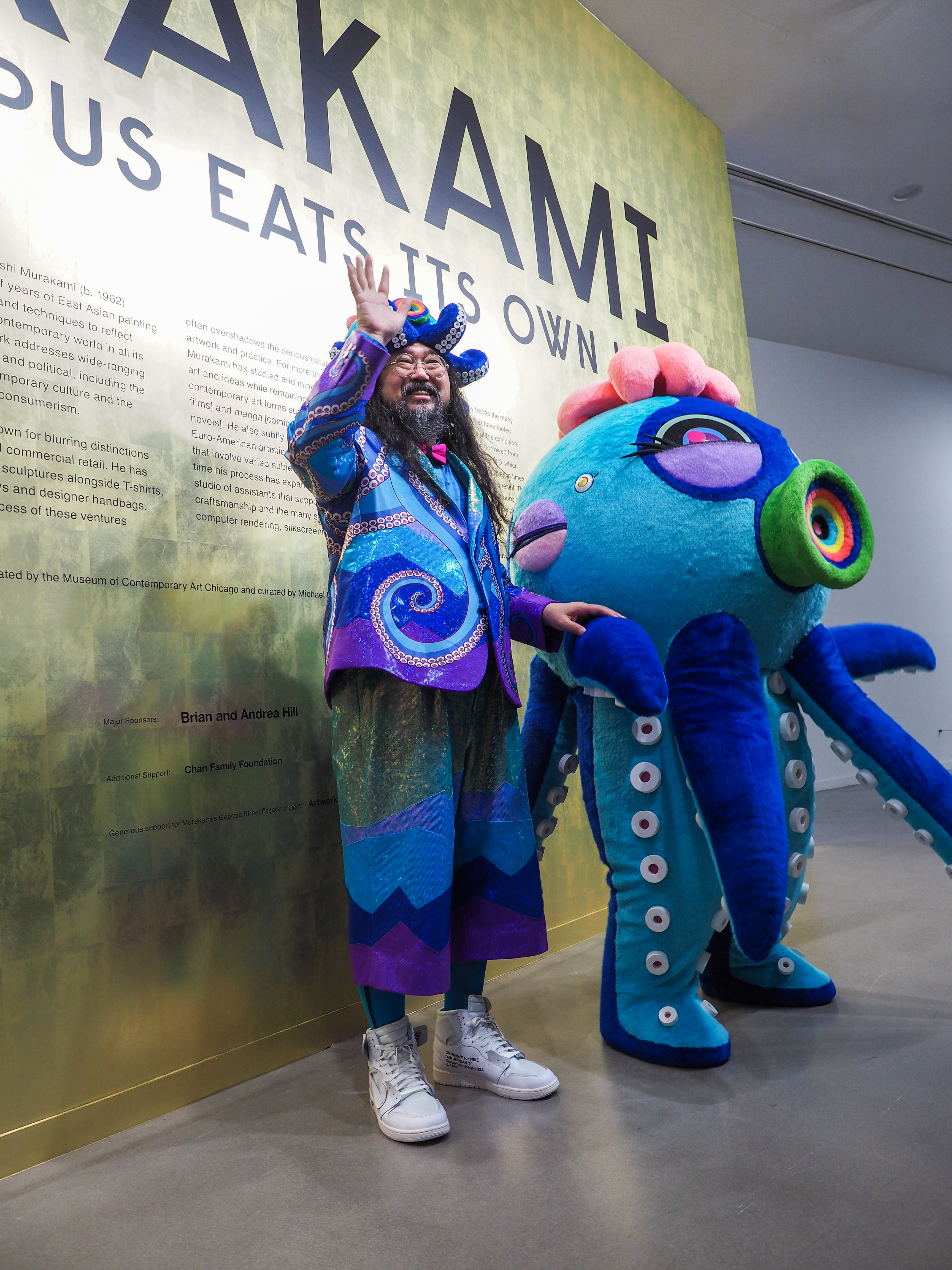 Before our preview of the exhibit we were treated to a Q&A with Takashi Murakami himself, which also happened to be on his 56th birthday. Takashi is no stranger to making bold outfit choices, or as he calls it “costumes”, which he collaborates on with his stylist Kazuki Yunoki. For the preview Takashi wore a Octopus motif suit [It played off the motif that wraps the outer exterior of the Art Gallery, as well as the double staircases in the entrance], a plush Octopus hat which obviously had eaten a bite out of one of it’s legs, and a brand new pair of Off-White x Nike “AIR JORDAN 1”, which Virgil Abloh had sent to Vancouver for his Birthday.

Bruce Grenville, one of the coordinating curators of the exhibit, moderated a short discussion with Takashi before our preview of the exhibit. Before the Q&A began, there was a special announcement from City Councillor Andrea Reimer, on behalf of the Mayor of Vancouver, Gregor Robertson. 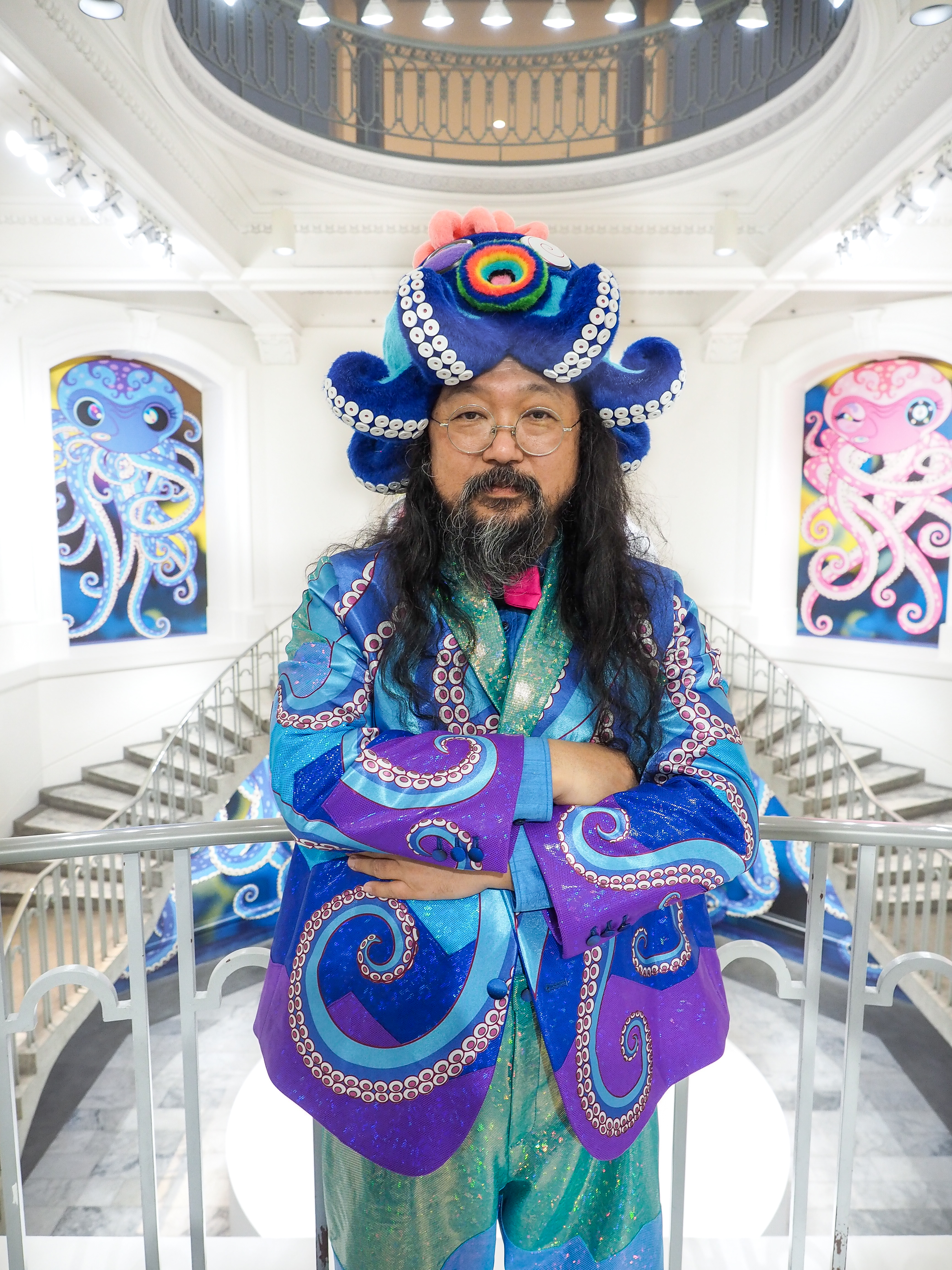 One of Takashi’s newest large scale pieces, a 5 meter tall sculpture stands in the middle of the main rotunda, between the spiral staircases. When Takashi came to Vancouver for the initial site visit, they discussed the tentacles wrapping the outer facade of the building, and the tentacles lining the rotunda, but after seeing the opportunity the space between the staircases, motivated him to finish the sculpture.

One of the most endearing things I heard was that on the back of all of his paintings, even his very early works, they are not only signed by Takashi, but also all the studio assistants that helped on those pieces.

At the end of the moderated discussion, a couple of us were given the opportunity to ask Takashi a question. I had the chance to be one of those people, so I asked (a bucket list moment for those of you who know me, and a huge opportunity for #DoTheDaniel):

Remember when #DoTheDaniel Vancouver Contributor @JoshuaDLangston was one of three media members allowed to ask @takashipom a question at the launch of his @VanArtGallery exhibit? ? Such an amazing opportunity for him and our blog ? #VAGxMURAKAMI #TakashiMurakami pic.twitter.com/lwU2yP6qQY

Josh: Through the years your art has been able to adapt with modern technology and social media speeding up the process. How has that impacted your creative process?

Takashi: “The first impact was Macintosh and now it is using 3D printer. It’s a big thing. For example, the 3D printer right now is a very democratic price. For one box it is $8,000, and I use it to make 3D sculptures. I set up three of them and 3-4 days later I have a 3D sculpture.

The exhibit houses over 55 paintings and sculptures spanning Takashi’s career from the 1980’s to present. The works are primarily fit within 4 categories, Nihonga, Superflat, Mr. DOB and Arhat Cycle. The Arhat paintings and sculptures have their own dedicated room in the exhibit. The room is very dark with the backlit murals, and plays off the feelings of death and fear. There is also two menacing looking large scale totemic sculptures, Embodiment of “UM”, and Embodiment of “A”, which are pieces from his 2014 exhibition “In the Land of the Dead, Stepping on the Tail of a Rainbow”. 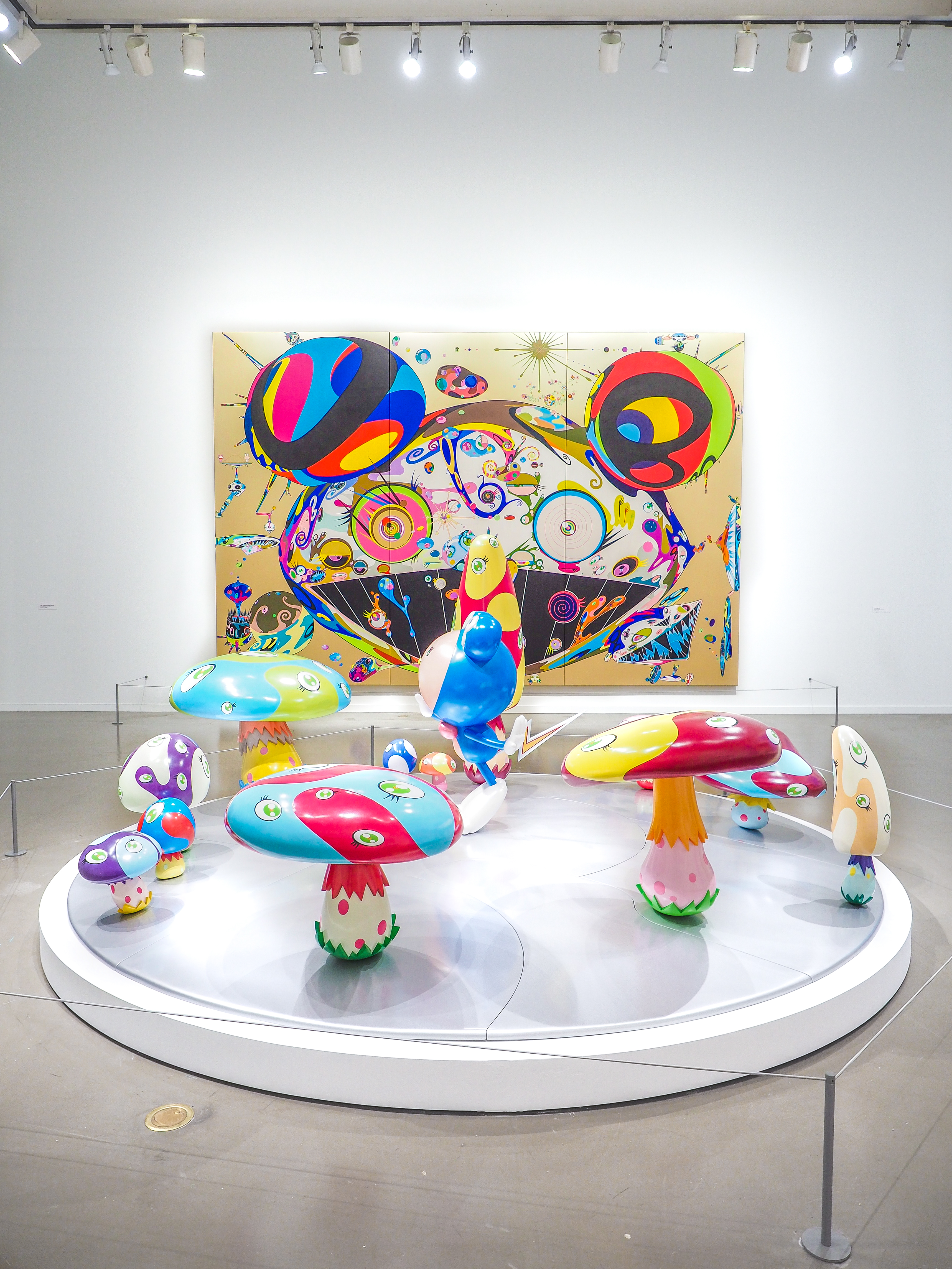 During his three decades as a artist Takashi has made his mark with his “superflat” style. He has collaborated with some of the biggest artists and disruptors of the world. Notably he has collaborated with Kanye West on the album art for his Graduation album, as well as the music video for “Good Morning”. Another one of his most celebrated collaborations came with his longtime collaboration with prestigious fashion house, Louis Vuitton, during the Marc Jacobs era. He reimagined the monogram in a rainbow spectrum, created monogramouflage, rugs [which debuted at Art Basel in 2009 – with only 20 pieces of each produced, the cherry blossom collection, superflat character bags and the short film “Superflat first love”. Through these collaborations, his star was on the rise not only in Japan, but internationally.

Also featured in the exhibition are a couple pieces from the collaboration with Kanye West, including the cover art he designed for the Graduation album, as well as a image from the “Good Morning” video and a 3D Kanye bear statue. What’s next for Takashi Murakami? He is about to embark on another exhibition, once again teaming up with Off-White’s, Virgil Abloh. This marks the second collaboration between the two, after designing limited hand printed shirts designed for ComplexCon last year. For their latest partnership the two are working on a exhibit for the Gagosian Gallery in London, blending their two unique styles into new collaborative pieces. From hand painted “SCULPTURE” bags with character motifs, to a re-imagination of Off-White’s logo. There also will be a limited edition T-shirt, that will be for sale exclusively at the Gagosian Gallery.

Some of my favourite recent exhibits at The Vancouver Art Gallery have included: KRAZY! The Delirious World of Animé + Comics + Video Games + Art (2008), Beat Nation: Art, Hip Hop and Aboriginal Culture (2012), Picasso: The Artist and His Muses (2016) and MashUp:The Birth of Modern Culture (2016).

Takashi Murakami: The Octopus Eats Its Own Leg is open now at the Vancouver Art Gallery (February 3 – May 6, 2018). For more information click here and to buy tickets, click here.